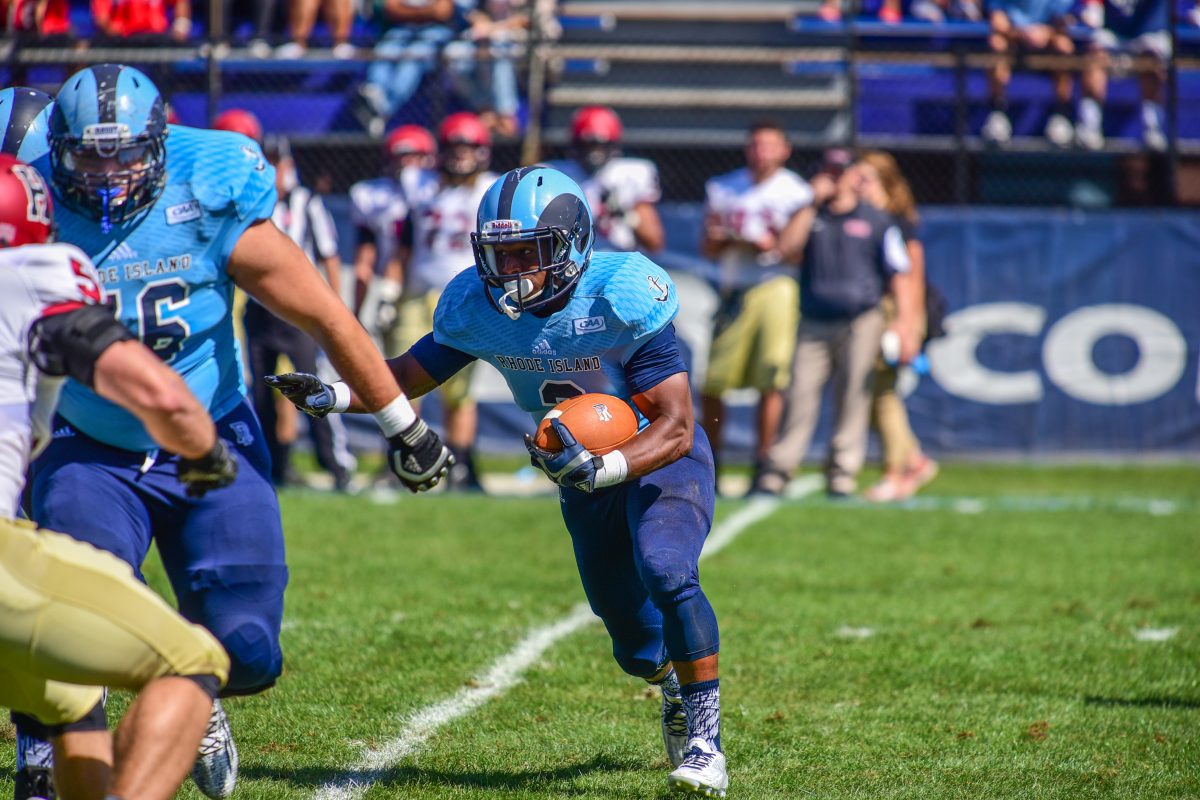 Dynamic sophomore running back Harold Cooper has provided a much needed spark on offense, and special teams for the University of Rhode Island football team.

Cooper was named the Offensive MVP of the football team last season after leading the Rams in rushing, with 172 carries for 746 yards, and three rushing touchdowns in just 10 games.

“I was a little surprised,” Cooper said. “I thought somebody else was going to get it, like a senior or somebody but, it’s an honor to get it. The coaches think I had a great year last year.”

Cooper was named the 2015 CAA Football Third Team All-Conference running back. The do-it-all back totaled 470 receiving yards, and two receiving touchdowns, along with 665 kick-return yards and one kick-return touchdown for 2,298 total all-purpose yards.

“Coop had a really nice year both in special teams and on offense, said Rhode Island head coach Jim Fleming. “He’s a dynamite player and he’s a very good player in our league. It was a pretty clear-cut decision.”

Cooper had the most all-purpose yards by any CAA player in a game during last year’s Governor’s Cup loss to the Brown Bears with 305, totaling 109 rushing yards and 183 kickoff-return yards to go along with two touchdowns. His versatile skillset has put him near the top of the league. He was ranked 10th in the country with 157.9 all-purpose yards per game last season.

“I think he’s all about the right stuff, he wants things done the right way,” Fleming said. “As he grows into his junior year, he’s taking more of a leadership role and our kids look to him to give us a spark when we need it.”

While being named the team’s offensive MVP is a big accomplishment, the sophomore running back is committed to building off of last season.

“I’m trying to higher my standards up this year,” Cooper said.

His goals include rushing for over 1,000 yards, scoring more than 10 touchdowns and trying to be named an All-American. Whenever he can help his teammates, especially the younger players, Cooper never falls short. His hopes for next season are “scoring as many touchdowns as I can and doing my job”.

His impact, both on and off the field, is palpable, as his teammates recognize him as one of their leaders.

“Harold Cooper is a big part of the team, he gets the train rolling,” said sophomore defensive back Shawn Antoine II. “Once he gets hot, we’re rolling so he’s definitely going to be a leader this upcoming season. He’s going to be great this year.”

Cooper says team goals outweigh any of his individual goals, and he remains committed to helping the team in any way he can. Cooper’s biggest goal is one that the URI football fan base hopes comes to fruition.

“Win more games than we did last year.”