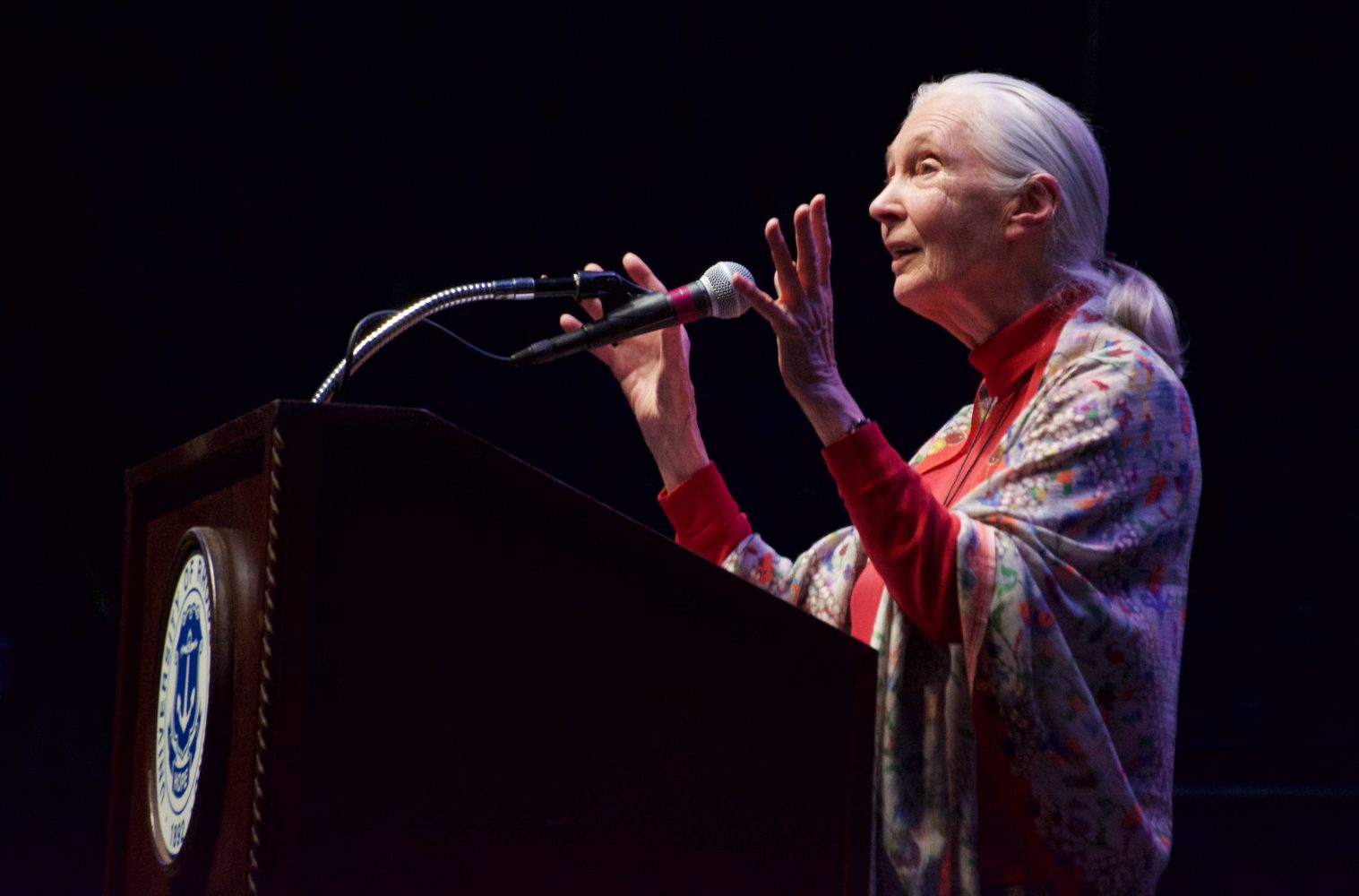 Students, don’t disregard your general education requirements. A secretarial class turned into the necessary skills Dr. Jane Goodall, primatologist, conservationist and renowned animal behavior expert, needed to secure the job that would kickstart her career and allow her to study primates in the wild.

Tuesday night, Goodall addressed a crowd of over 4,300 people to headline the University of Rhode Island fall Honors Colloquium series, titled “Origins: Life, the Universe, and Everything.”

Her talk highlighted the history of her career, her favorite moments from throughout her work and about the projects that her outreach groups are doing to help people and animals worldwide.

Her message was simple: “Every individual has a role to play,” Goodall said in an interview before the event. “We can make an impact every single day.”

She began the lecture by thanking her mother for fostering her creativity and curiosity as a child, which she largely attributes to her success today. She recounted a story about visiting a farm for vacation when she was about 4 years old. Her job was to collect eggs from the chickens. Goodall was perplexed with how chickens laid their eggs, and after asking her parents and relatives to no avail, decided to set out and find the answer herself. After initially startling a chicken, and after four hours of waiting, eventually Goodall watched a chicken lay an egg.

“If you look at that with hindsight,” Goodall said, “isn’t that the making of a little scientist? The curiosity, asking questions, not getting the right answer, deciding to find out for yourself, making a mistake, not giving up and learning patience. It was all there.”

After working for a documentary film studio, a friend invited her to Kenya for a visit. Goodall moved home, started working as a waitress in a hotel, and eventually saved up enough money for the trip by boat from England to Kenya. A few weeks into her stay, someone encouraged Goodall to meet Louis Leaky, curator of the Natural History Museum in Nairobi, Kenya. A week before arriving to Kenya, Leaky’s secretary resigned, and Goodall was offered the job where she finally put her “boring secretarial course” to good use.

A year later, Goodall, accompanied by her mother and a team of researchers, visited the Gombe Stream National Park in present-day Tanzania, to study the animals. Goodall said that the chimpanzees are conservative, and that they didn’t initially warm up to her. After a few weeks, she became frustrated.

“You are finding out more than you think,” Goodall said her mother reminded her. Soon after, she witnessed a major breakthrough–a chimpanzee, which she named David, using a long blade of grass to extract termites from a mound. Up until that time, people believed humans were the only species to make and use tools. Using this information, she secured more funding to continue to work in the field. The group funding the project sent a film crew to document the discoveries.

Goodall skipped her Bachelor of Arts degree, and went on to receive a doctorate degree in ethology at Cambridge University. She said that the professors often told her that her entire process was wrong, that the animals she was studying should have numbers instead of names, and that they didn’t have personalities that she attributed to them.

In 1977, Goodall founded the Jane Goodall Institute. The initial focus was conservation in the Gombe area, but after attending a conference in 1986, the Institute became so much more. Goodall “couldn’t sleep for weeks” after seeing footage of chimpanzees, “highly sociable creatures” in cages in captivity.

“I went to the conference a scientist, but I left as an activist,” Goodall said.

A few years later, one of the first Roots and Shoots groups was founded. Goodall took a group of high school students who were all passionate about different issues and helped to encourage them to act and help make change within their communities. Today, Roots and Shoots has expanded to over 100 countries with over 1,000 different groups that work on projects that focused on helping people, the environment and animals.

“We can all choose what kind of difference we’re going to make,” Goodall said.

Goodall ended the talk with what keeps her hopeful, even when everything in the world looks so bleak. She discussed the resilience of nature, social media, and, most notably, the “indomitable human spirit.”

The URI Honors Colloquium is free and open to the public, with new speakers every Tuesday. Next week’s speaker is Maeve Leaky, a paleoanthropologist and granddaughter of Louis Leaky, who worked with Goodall in her research. The lecture, titled “Milestones in the story of us: why, when and how did we come to be?” will be held next Tuesday at 7 p.m. in Edwards Auditorium.