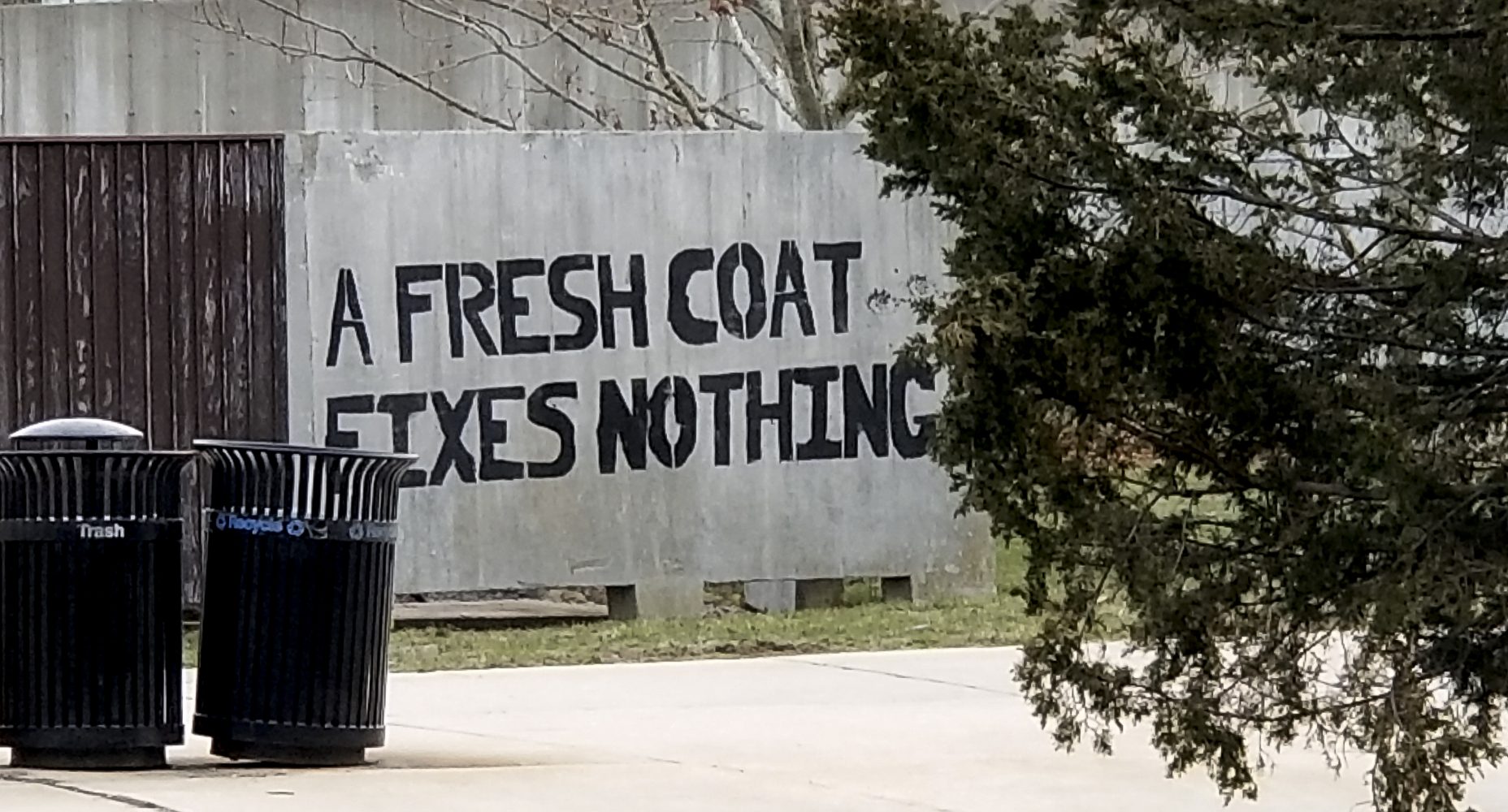 In response to the new parking restrictions, graffiti has appeared on the sides of the Fine Arts Center.

With the Fine Arts parking lot usually reserved for faculty and staff now being parking for visitors, someone has taken it upon themselves to paint their grievances on the side of the Fine Arts Center. There have been three instances of graffiti that the Cigar has been made aware of. With phrases like “A fresh coat fixes nothing,” “Our roof is holier than thou Dr. Dooley,” and one depicting a dictionary definitions of the word irony with only one definition reading “this.”

Ted Mook, an artist and teacher in cello, said that he has never seen this type of graffiti before the parking changes were implemented. He believes that someone took this upon themselves as a way to express the poor conditions of the FAC.

In a Facebook post, Mook said that, “One of the hilarious side-effects of URI’s re-purposing of the Fine Arts Center’s parking lot for interested applicants to the University is that applicants must now walk past the blatantly neglected building the University has been struggling to hide for decades.” And with this new walk past the FAC, Mook added that faculty and students found a way to put their “special expressive tools to work.”

According to Mook, no one knows who is putting the graffiti up, but even when it gets painted over, a new one seems to pop up not too long after.

“It’s very funny to me,” Mook said, adding that he thinks this expression is very well thought out, nicely done and kind of beautiful. “Someone knows what they’re doing.”

“The University understands the frustrations members of the campus community have with the condition of the Fine Arts Center,” the statement said. “But as a community, we must condemn the defacing of any University property with graffiti. Such actions violate the law and University policy and are in total contradiction to our values.”

“A lot of the students in the FAC are a little fed up with some of our conditions,” he said. “If graffiti is the only thing that is getting the attention of the school, that’s kind of sad. People shouldn’t have to spray graffiti on a building to get the college to pay attention to the arts.”

Brunelle believes that the visitors of the University will get a laugh out of the graffiti but most likely won’t understand its full message.

“A lot of people on the outside don’t actually know what the conditions can be like unless they’re in the building on the daily,” Brunelle said. “As far as I’m concerned, if the school is trying to appeal to the arts, they’re not doing a real good job at it considering the FAC looks like a bunker.”

Jordan Dauray, a sophomore TMD major and business and art minor, also sees the graffiti as ironic and does not see the need to cover it up.

“[It is] the fine arts building and its probably the most bland and unflattering to look at on campus,” she said. “I definitely agree with the messages this artist/artists are putting out there. The graffiti is art and ‘A fresh coat fixes nothing.’” Dauray added that with the graffiti in a visible spot, it was obviously meant for people to see and comment on.

Mook said that he hopes there is more expression of this because he believes it is a wonderful thing. At the end of his Facebook post, he wrote “To whomever made this decision to change the parking, thank you. You are a secret ally in our struggle to recognize the importance of the study of the Arts and Humanities in a University curriculum. STEM is good, but STEAM is better.”