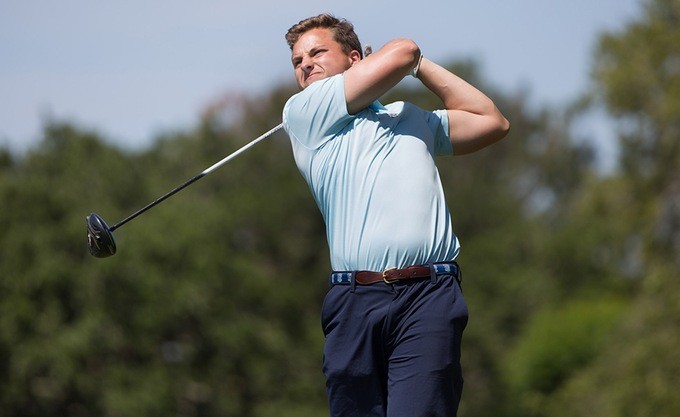 Senior Dawson Jones follows through after driving the ball off the tee.  |Photo courtesy of Julie Fletcher.

“Honestly, it was awesome,” said Jones. “It was a long time coming. I played a lot of great tournaments this year, just couldn’t quite get the finish down. I finally got it going and stayed focused, stayed confident and I was the low guy out there so it was exciting.”

Jones has awards to his name such as being named to the PING All-Northeast Region team twice following his sophomore and junior seasons. Along with that he has two Atlantic 10 All-Conference team awards, All-New England Honors and was named as a Cleveland Golf/Srixon All-America Scholar. He has family ties to Rhode Island, with both his father and grandfather being Rhode Island graduates. Jones originally was looking elsewhere to play his college golf, but after visiting the school knew that this was the place for him.

“I really did have a great four years here,” said Jones. “I’m glad I made the decision to come here. It actually was kinda funny how it all happened. I wasn’t originally gonna come here, I made a last minute decision because I decided to come up and visit. It was truly unbelievable. It was so much fun. There was so much discipline, a lot of great memories with the team. We were definitely one of the closer golf teams out there. A lot of them compete with each other and they don’t have as much fun as we probably did together. All I can say is I wouldn’t have wanted to spend my four years anywhere else.”

Coming into his senior season, Jones had seven top five finishes and 17 finishes in the top 15. In his senior season, Jones worst individual finish was tied for 29th at the Palmetto Intercollegiate, a field that boasted teams such as South Carolina, Virginia, University of Alabama-Birmingham and Clemson. Jones was only outside of the top five in two of the nine tournaments he appeared in. He cracked the top twenty in every event but one. Jones was nothing short of a revelation for Rhode Island golf this season, anchoring them at the number one spot.

Jones will play in his last event for Rhody golf this upcoming weekend at the Atlantic 10 Championship.

“We’re feeling really good,” said Jones. “The win individually and as a team brought momentum. You never know what to expect down there. We just have to go, we have to enjoy ourselves, we have to have fun, we have to stay focused. We can’t let the pressure get to us and I think we’re gonna do really great.”