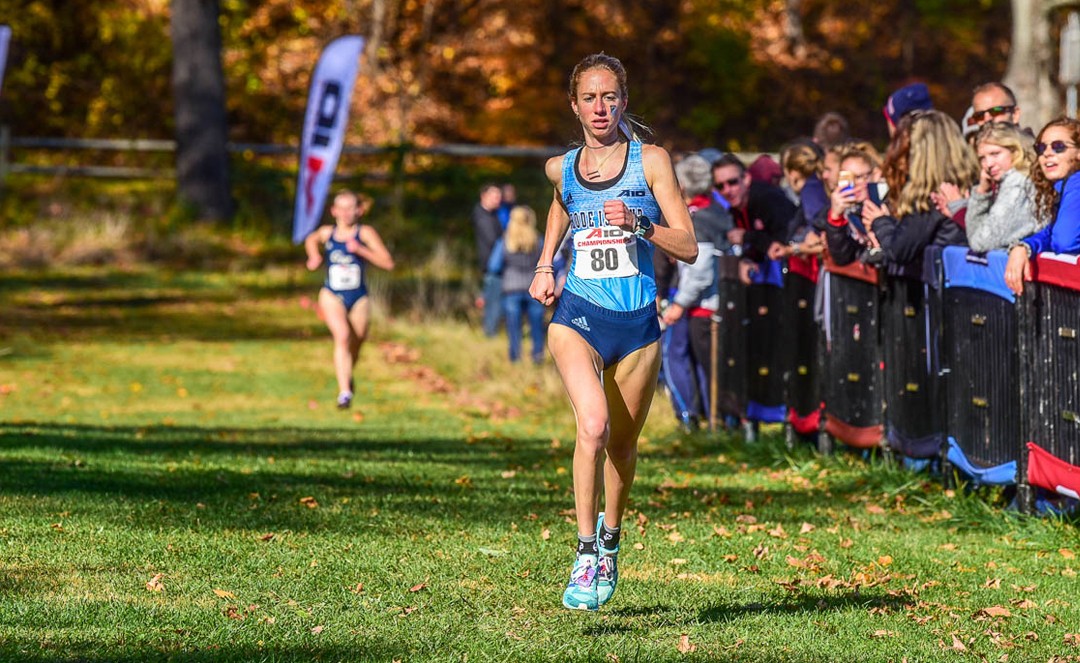 This weekend the University of Rhode Island men’s and women’s cross country teams traveled down the East Coast to Oatlands Plantation in Leesburg, Virginia for the Atlantic 10 Championships.

A wonderful crisp, fall day in Leesburg brought in a record crowd to watch 259 distance runners from the 14 A-10 schools go at it for the conference title.

History was made for the women’s cross country team during the meet. For the first time in team history, a URI women’s cross country individual took home the individual title. After placing in seventh at the 2.4K split, Lotte Black charged up to the front of the pack in the second half of the race, finishing with a time of 17:38. Her victory also earned her a spot on the first-team all-conference team, and the A-10 championship.

“I was not surprised one bit,” said men’s cross country Head Coach John Copeland. “With 500 meters left in the race, the announcer came on the loudspeaker and said the top two runners are so and so and so and so and I thought to myself, well if Lotte is in second place, then the kid leading is going to be the loser.”

Black, herself, was really impressed with her performance.

“It’s definitely really exciting,” said Black. “It was a great course and it was a lot of fun competing with everyone.”

“My team made nice improvements from last year,” Feit-Melnick said.

The men’s team finished 10th in the A-10 Championships with a score of 245. This was tied with the 2017 URI men’s cross country team for the best finish at this meet in this millenium. The top runner for the men’s team was sophomore Eric Zulkofske, who finished 30th with a time of 26:16. He was followed by senior Joseph Maguire, who finished 38th, and freshman Ben Fleischer, who finished 50th. The performances from this trio qualified them for the 2019 NCAA Division I Cross Country Regional in Buffalo next weekend.

“I was very impressed with our top five runners,” said Copeland on his team’s performance this weekend.

Zulkofske, Maguire and Fleischer, along with the Rams women’s cross country team will return to the course on Nov. 15 to compete at the 2019 NCAA Division I Cross Country Regional in Buffalo.

Last year, the men’s team finished No. 13 out of 14 teams, while the women’s team finished No. 12 out of 14 team teams. The Dayton Flyers’ men’s cross country team and the Richmond Spiders women cross country took the conference title with 72 and 41 points respectively. Shelby Aarden was the top finisher for the women’s team last year placing in 29th with a time of 18:10. Joseph Maguire finished 61st for the men’s team last year with a time of 26:11.