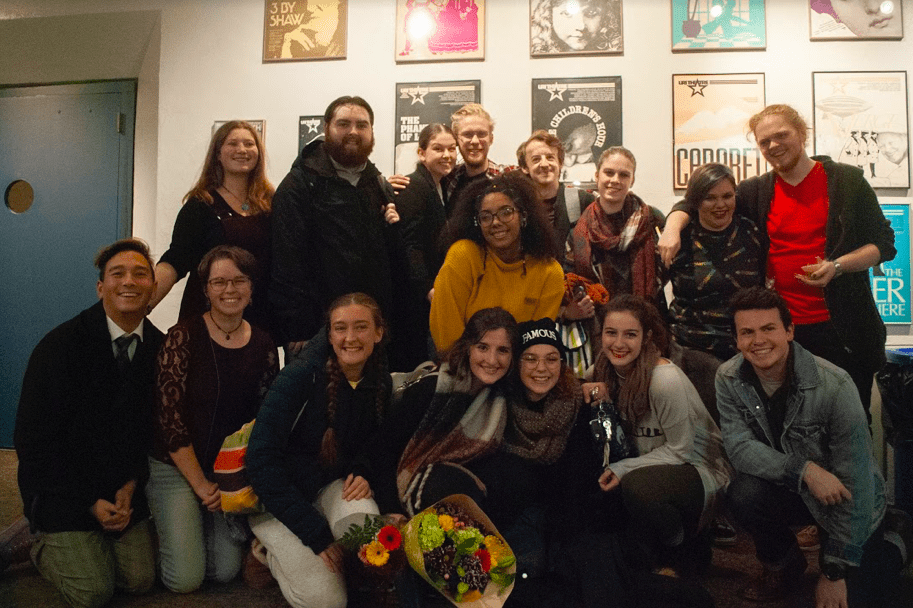 Performers from the show “She Kills Monsters” Celebrate after their opening night. Photo by James Singer.

The University of Rhode Island’s theatre department opened their final mainstage production of 2019, “She Kills Monsters,” this past Thursday.

Opening weekend audiences of “She Kills Monsters” witnessed the transformation of Robert E. Will Theatre into the world of Dungeons & Dragons and 1995 Ohio through elaborate and impressive design, heartwarming, heartbreaking and hilarious story, classic ’90s songs and strong acting performances.

Junior Erin McGowan plays Agnes, an average 24-year-old high school English teacher who tragically lost her parents and younger sister Tilly in a car accident two years earlier. While unpacking Tilly’s room, Agnes discovers an old notebook of Tilly’s, outlining a D&D quest she wrote before her death and decides to play it to get to know her lost sister better.

McGowan called her first read of the script “jarring” due to the fast pace of the story which includes a fighting montage and dance battle. She then found out the show would be directed by recent URI theatre alumnus, Madison Cook-Hines.

“I was really hoping that would be the show that I would get cast in, to get to work with her and tackle this monster of a play,” McGowan said. “[‘She Kills Monsters’] is by far one of my favorite plays I’ve worked on.”
Junior Shannon Donnelly, who plays Tilly, was drawn to the show because of its LGBTQ+ representation. In Tillius the Paladin’s world of New Landia, all of the “good guys” are gay, and in the world of Athens, Ohio in 1995, Tilly is gay too.

“It’s done in such a positive, inspiring way,” Donnelly said. “To have a lead female in a show be a lesbian character is pretty uncommon and I don’t think URI has ever done a show like this where it’s a young female who’s just openly and proudly gay.”

The show deals with homophobia, coming out and acceptance. Other topics tackled are grief, wish fulfillment, bullying and regret.

In the world of New Landia, Tilly, or Tillius the Paladin, is the hero, the protagonist, but while she was alive, she was ignored, looked at as nerdy and weird. Through the quest, Agnes not only gets to know the sister she lost and never put effort in knowing, but she gets to see her sister the way Tilly wanted to be seen by her.

“I think the overarching message of the show is acceptance of yourself and of others,” Donnelly said. “Whether it has to do with the LGBTQ+ community or hating on someone for liking ‘dorky’ things, taking your insecurities out of things, and just being happy about who you are and not judging other people for being who they are.”
Amongst all of the jokes and badass fight sequences, comes some pretty heartbreaking along with heartwarming moments, particularly between the two sisters. Agnes may be getting to know her sister, but she has to cope with the fact that it’s only within the quest and that when she leaves that world, her sister is still gone.

“[Agnes] has that message of you should live every moment as it is,” McGowan said. “You shouldn’t wait for the next one because you might not get one.”

Part of what makes Tilly’s world come to life so well is the work of the puppeteers and their designers. As the title would suggest, the play features many monsters in the forms of puppets. Senior Dean Hernandez served as the show’s puppet designer and the puppets were operated by three primary puppeteers and multiple cast members throughout the show.

Hernandez was familiar with D&D and has been on the same campaign, which is a continuing storyline or set of adventures, for the last two-and-a-half years. In his designing process, he often consulted the D&D Monster Manual to make sure his work was accurate to the game.

He admitted that the road to making the puppets wasn’t easy and that he owes a lot of credit to the show’s associate puppet designer and putter master, Melie Hayes, puppeteers, Emma Becker, Jenna Muldoon and Owen Gilmartin and everyone who did puppeteer work.

“Not only do you have to create a character with no dialogue, but you have to put your body in it,” Hernandez said of puppeteering. “The only way for this inanimate object to live is through the actor, through the puppeteer and they really have to bring life into this thing. It’s both on the actor and the puppeteer to suspend their disbelief that this thing is alive.”

The biggest puppet, Tiamat, a five-headed dragon, requires 15 actors onstage to work. The whole process of theatre is extremely collaborative and this show exemplifies that.

“She Kills Monsters” has four more performances from Thursday, Nov. 21 to Sunday, Nov. 24. For tickets and information, visit the theatre department’s website or the box office located in the Fine Arts Center.