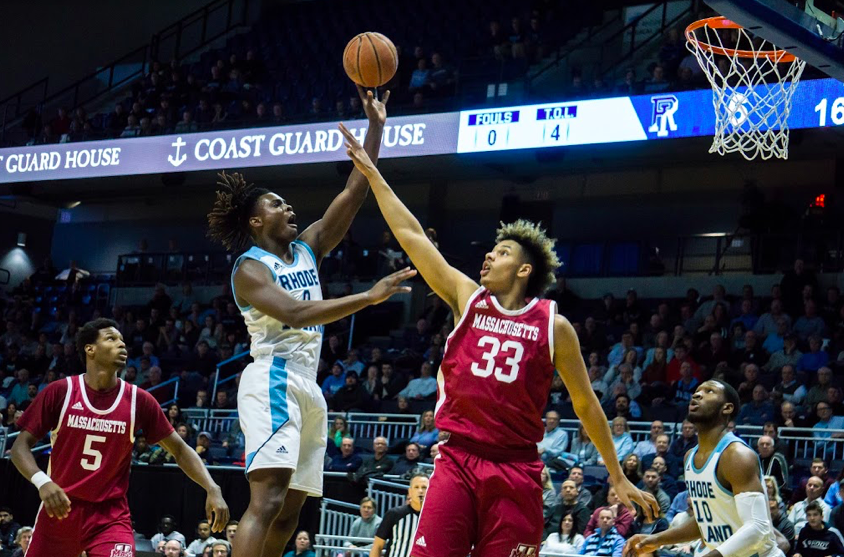 Maturity and progression can take many different forms.

For some, it’s tying their shoes on their own for the very first time. For others, it’s learning how to ride a bike sans training wheels. For Rhode Island basketball, it is,  simply put, taking care of the task at hand.

The Rams easily could have overlooked a much inferior opponent in their regional rival the Massachusetts Minutemen who, fresh off the heels of a blowout loss against Davidson, sat with just three Atlantic 10 wins in their back pocket through nine games.

Not falling into the stereotypical “trap” game, the Rams defeated UMass 73-67, mostly controlling all forty minutes of this one. On a night where they didn’t execute or play at the highest level, Rhode Island was able to stay focused enough to not step on one of the many landmines in the A-10.

URI was placed in the scoring column once again by junior Fatts Russell, who finished with 21 points and also added four steals to the stat sheet. Senior Jeff Dowtin added 16 points, six rebounds, and four assists of his own but it was Cyril Langevine who was the Rams focus.

While the senior big man from East Orange, New Jersey finished one rebound shy of a double-double, scoring 15 points, he crossed an important collegiate threshold, scoring his 1,000th career point. He joins teammates Dowtin and Russell in the 1K club, becoming the 57th player in program history to reach the mark.

“It was pretty big to get a thousand,” said Langevine. “I took a long time. I was happy, the guys were happy for me. I just went out there and hooped.”

With the Rams top three playing at such a high level, their floor and ceiling alike are  both instantly raised.

“They have stuffed the stat sheet since they’ve been here,” said Rams Head Coach David Cox. “As they go, we go. I wouldn’t want to be with another trio of guys.”

Whatever switch was flipped inside the locker room since their two game skid against Brown and Richmond, it has URI in prime position to make their third NCAA tournament in four years, the first time such an occurrence would happen in South County since the 1996 through 1999 seasons, when Rhody punched three straight tickets to the dance.

The Ryan Center faithful also got a sneak peek into the potential future of the A-10 as well, with UMass freshman big man Tre Mitchell putting on a dazzling scoring performance. Mitchell was the engine that kept the Minutemen from getting blown out of the gym, scoring nearly half of their points with an other worldly 30 piece on 13-20 shooting from the field.

A lethal combination of size, speed, quickness and agility, Mitchell showed prowess on the low block when being picked up by either Jermaine Harris or Langevine. If that wasn’t enough, Mitchell also flashed his potential as a shooter, attempting two jumpers from beyond the arc and converting on one of them.

Rhode Island now sets its sights on the Colonials of George Washington, as they travel to Foggy Bottom for a Saturday afternoon matinee. Yet another potential landmine that could hamper the NCAA Tournament progress Rhode Island has made over their winning streak, the Rams need to do what they should once more: win. This past week, Rhody received enough votes in the AP Top-25 to put them at 30th in the country. Coupled with their ascent in advanced rankings, such as KenPom (49) and NET (41), Rhody could very well be a true Top-25 team by next Tuesday night, when they would roll into Dayton, Ohio to face the juggernaut Flyers.