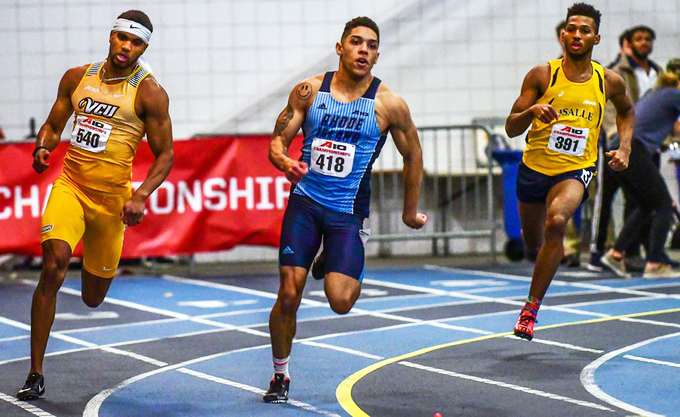 This past weekend was another action packed day for the University of Rhode Island’s Men’s and Women’s Track and Field teams.

Both competed in the Boston University David Hemery Valentine Invite as they begin to inch closer to the Atlantic 10 conference championship meet.

The women kicked off the weekend on Friday, Feb. 14 and in what seems to be a regular occurrence, Lotte Black broke yet another record. This time around it was her own record in the mile that she broke when she finished eighth with a time of 4 minutes, 36.35 seconds.

“The way she ran this past week was really impressive because she had a really bad cold,” Head Coach Laurie Feit-Melnick said. “I was impressed that she was able to better her mile and break her own record. She works really really hard.”

The Rams only had one first place finisher, senior Kristina MacLure. MacLure earned the top spot for Rhody in the 400-meter with a time of 54.78 seconds.

“We were pleased,” said Feit-Melnick. “We had some very good performances this past weekend. All in all it was a very positive meet.”

Rhody continued to see strong performances throughout the day. Sophomore Jordan Ross placed seventh in the 500-meter with a time of 1 minute, 4.62 seconds. Junior Trevor Rooney placed fifth in the triple jump with a distance of 14.90 meters.

Sophomore Jack Reichenbach, who had a strong showing last week at the URI Coaches Tribute, finished 13th the long jump with a mark of 6.89 meters. Rhody also had two top 10 finishers in the high jump. Senior Eric Wicks placed eighth with a mark of 2.00 meters and junior Quindel Wilson finished right behind him in ninth with a mark of 1.95 meters.

The Rams did take a top five spot in the 400 meters when senior Anthony Delasanta finished in fifth place with a time of 47.57 seconds. Senior Maxwell Dickens finished 38th in this same event with a time of 49.09 seconds.

As the men’s and women’s teams continue to prepare for the A-10 conference championships they both will be back in action next weekend when they participate in the Brown Invitational that is being held at the Olney-Margolies Athletic Center at Brown University.