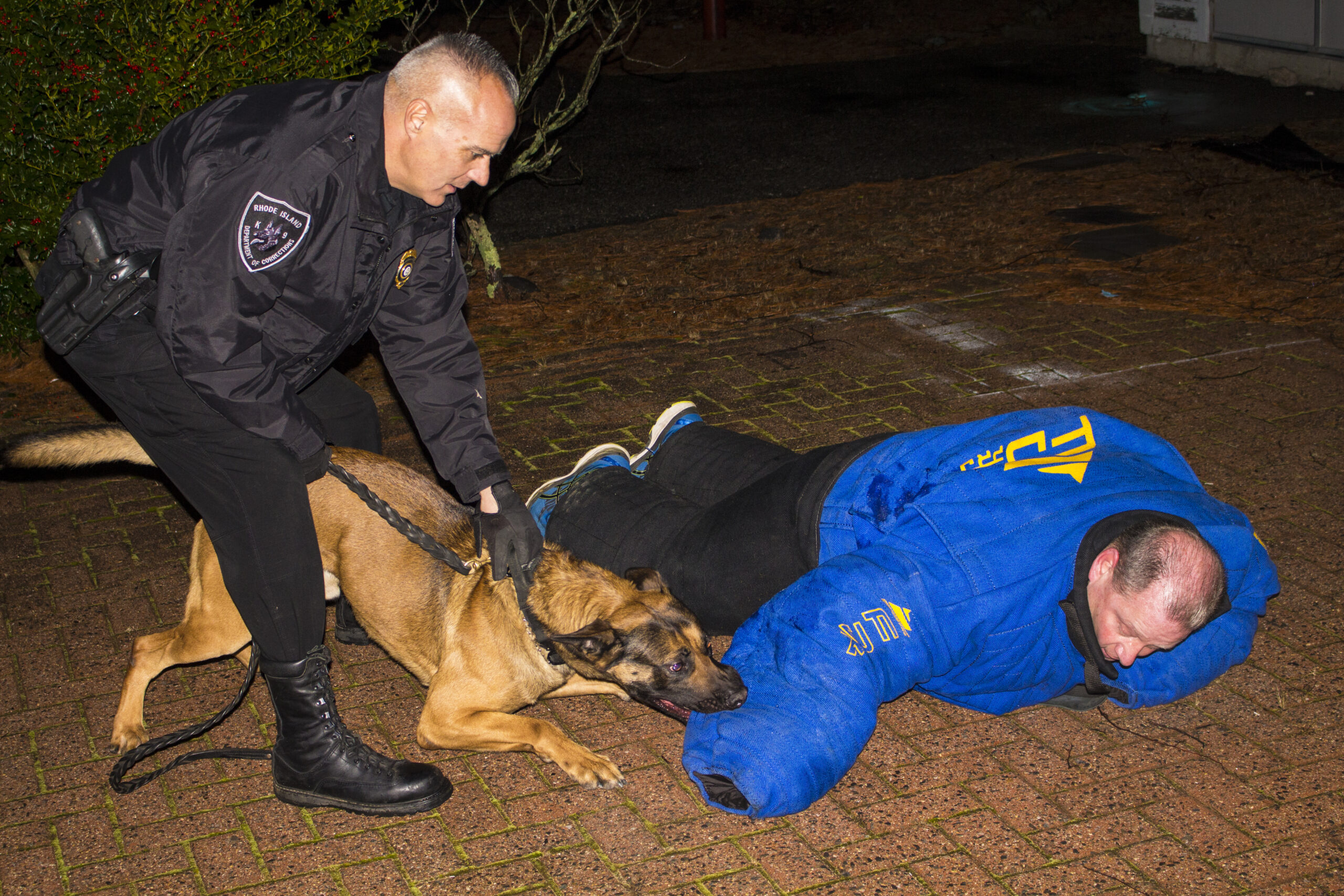 Over the last few months, I had the amazing opportunity to take part in the University of Rhode Island’s Citizens Police Academy, put together by Sgt. Erica Vieira. Once a week on Thursday nights, 36 of us would meet in our platoons – Alpha, Bravo and Charlie – and get a hands-on, behind-the-scenes look at what it’s like working in law enforcement. Over the course of nine weeks, we covered quite a lot, from fingerprinting and forensics to DUIs and how to handle K-9 units.

We spent time learning about fingerprinting, both the old method with ink and a newer, digital method connected to an Automated Fingerprint Identification System (AFIS). Fun fact: URI’s digital fingerprint scanner is located in the basement of the Public Safety Building on Lower College Road, which is also where the two holding cells are. Trust me: you don’t want to spend the night there, so try not to get arrested.

State Fire Marshall Bruce Quinn came one week and gave us a Bomb-Making Materials Awareness Program (BMAP) presentation. This one was really cool, albeit kind of terrifying, since there are a lot of different ways to easily make deadly bombs. Quinn brought a bomb suit helmet with him and we got to try it on. Those things are hot, heavy and uncomfortable, and we tried it on just sitting in a classroom. I couldn’t imagine wearing that in a high-stress situation with, you know, an actual bomb.

One of my favorite classes was on a cold, rainy night in November when we did mock DUI stops: pulling people over, asking them to step out of the vehicle and performing field sobriety tests. I learned a few things from this. Firstly, driving a police car and turning on the siren is really cool. Secondly, I am not cut out to be any kind of law enforcement officer. It’s a lot more difficult than it looks, and I don’t have nearly enough of a commanding presence for people to take me seriously in those situations.

The following week, we tried “drunk driving” for ourselves by wearing the drunk goggles that you might have used before in driver’s education and trying to complete three tasks: Mario Kart, riding a bike and driving a Kubota, which is essentially a larger golf cart. These were hard, and I learned a lot from this, including never to drive drunk.

We spent our last class before winter break at the Cranston Police Training Academy, where we used a simulated firearms training system to see how well we’d fare in life-or-death situations. In our platoons, we’d split into pairs and enter the room with the simulation on the screen. We held pistols set to fire air and would have to work with our partner to react based on what the simulation was showing us. One of the scenarios that we were put in was a school shooting, and the other was a traffic stop. This one was probably the most difficult for me. When you’re in the moment and have to make that decision as to whether or not to shoot, the adrenaline is running so high that I felt like I acted almost without thinking. There was danger, and my instinct was to shoot. I was definitely left rattled for a bit after this one.

We learned quite a lot about police K-9s and the different jobs that they do. Vieira’s partner is a black lab named Figaro, an explosive detecting dog. She works frequently with Col. Robert Voisard and his dog, Leks, a Belgian Malinois who is trained as a patrol dog as well in explosives detection. Officer Paul Wells of URI Police also works with them a lot with his dog, Taz, who is trained in narcotics detection.

The officers gave lots of demonstrations with the dogs, showing us how they can sniff out drugs and explosives and take down criminals, which in this case were officers dressed in ‘bite suits’ so that they wouldn’t get hurt. Working with Vieira, Voisard and Wells as well as Figaro, Leks and Taz was amazing. The bond between the dogs and their handlers is so strong, and together the work that they do is incredible. The dogs are smart and well-trained and great at their jobs, but can turn that off in the blink of an eye to play and relax with us.

Our second to last class was spent examining mock crime scenes. We put everything we’d learned in the program, from fingerprinting to working with K-9s to basic forensics (which we’d learned about when we toured the RI State Crime Lab, located on the bottom floor of Fogarty Hall), into practice. Three scenes were laid out for us: two murders and a suicide. We were tasked with determining what happened and why based on a brief explanation of the call leading up to the scene and the evidence we saw when we arrived. As someone who’s obsessed with crime shows and dreamed of being a detective for years, this was awesome. And at the same time, it also taught me that I could never, ever be a police officer.

Throughout all of this, we were working and learning in our platoons, the groups of 12 that we’d been put into during the very first week. As the course went on, we became very close, and our platoons became like little families. This program brought together people who may never have met who had one thing in common: they all wanted to learn more about what it’s like being a police officer. Many of the participants were criminal justice students, but there were a lot of adults, too. The people that I met and the experiences that I had in the Citizen’s Police Academy are ones that I won’t soon forget.

For people who think they’re interested in going into law enforcement, who are looking to explore new things or who are just interested in law enforcement in general, this is a fantastic experience. I signed up because I thought it would be a cool thing to write about and because I was a double major with criminal justice at the time and wanted to see what it was like to be a police officer. I realized that being a police officer was not for me, but I still loved the experience and learned a lot from it.

I want to thank everybody who went above and beyond to help put this program together, including the URI Police Department, Public Safety and the many people who volunteered their time to come and teach us about law enforcement. Thank you to everybody who participated in this program for being so eager and willing to try new things with a group of strangers. And, most of all, thank you to Sgt. Vieira, who dedicated a crazy amount of her time to planning this program, putting it all together and running it every week. You did a great job, and I know that I speak for everybody who participated when I say that we are so grateful for and inspired by all of the hard work that you do.