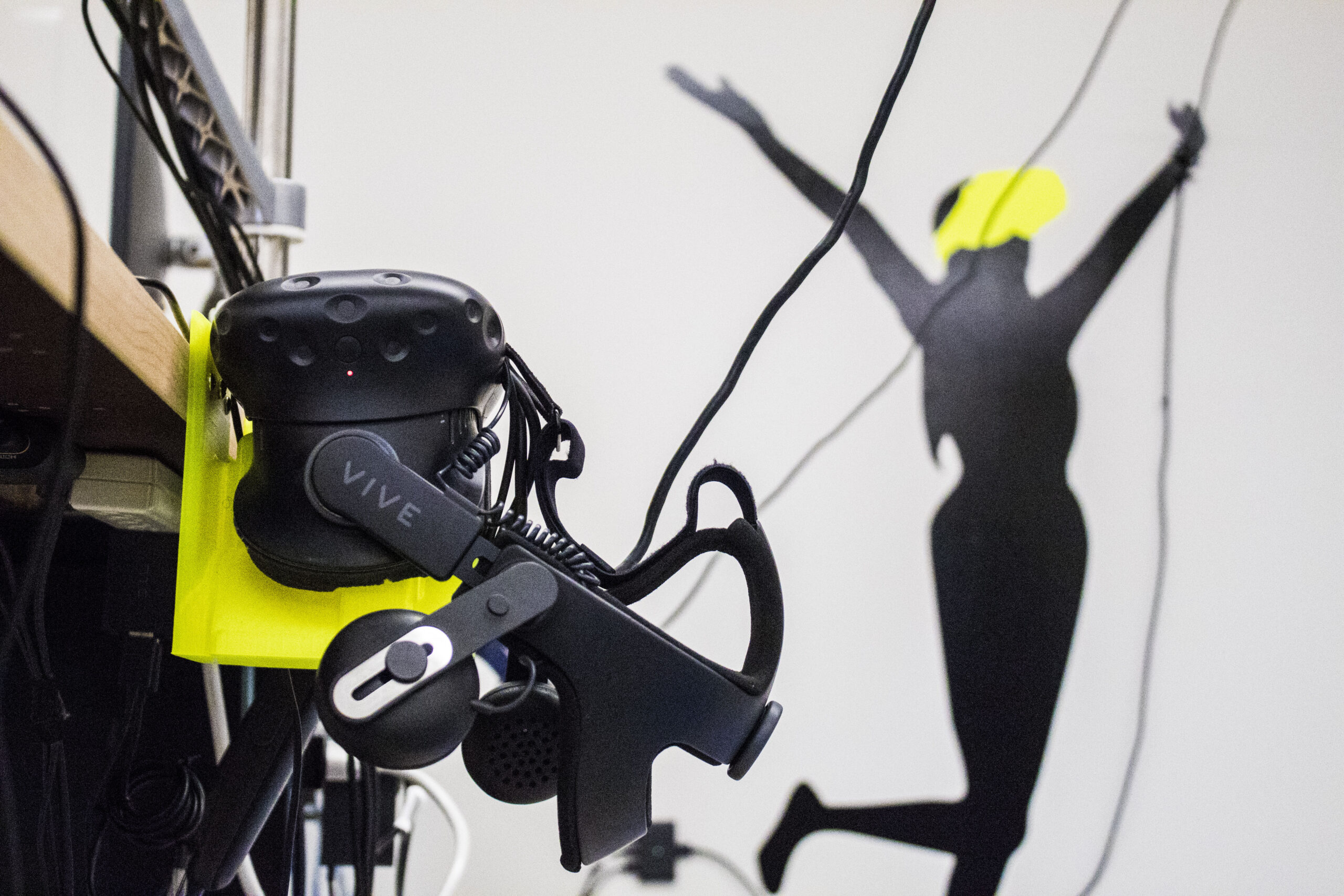 The world of virtual reality allows students to leave school pressures behind in the URI scholarly technology lab. Photo by Siobhan Richards.

The University of Rhode Island scholarly technology labs is hosting a virtual reality (VR) party in an effort to give students a break between midterms.

Erika Uzmann, the manager of scholarly technology labs at URI, started in June and works within the Makerspace to help students learn how to use equipment in the lab.

“My largest role would probably be helping students get through projects and hiring student workers that can help along with that, teaching them the equipment and suggesting new resources that may help students in the future,” Uzmann said.

The Makerspace at URI is available to all majors at the University. Their VR event was positioned to promote the area to students who may find the equipment intimidating.

“The VR party was my idea,” Uzmann said. “Part of my job is to figure out new ways of getting people in here and helping people learn new equipment, so this was sort of a fun idea to get people in here in a non-intimidating way to access equipment that they otherwise might [find] intimidating because they never used it before.”

Senior marine affairs major Gina Vincent has worked in Makerspace and based her involvement on her own interests.

“When I was a freshman, I spent so much time here I was actually offered a job,” Vincent said. “I was in here learning the equipment myself, 3D printing stuff for my dorm room and just having fun. When I started working here back in 2016, it was still very new so there was only one employee at the time and they asked if I wanted to join a team and I have been working here ever since.”

The Makerspace was introduced at the University around four years ago with new equipment introduced slowly throughout the years. Uzmann has thought of new ideas to get students into the facility with a total of 40 students attending the first VR party during final weeks last semester.

“A lot of the events that we came up with the first semester to run in here were things that I thought that students might be interested in,” Uzmann said. “I tried to keep them fun-oriented because you guys are in class all the time and you aren’t looking to come and take another class or anything like that.”

Vincent has worked with fixing materials and ordering new parts. She wants to get more people to come into Makerspace more often.

“We have people sign in because the more that we can show the University that we are used, the more funding we will get and the better equipment we can get to support the student needs,” Vincent said.

The VR party is a more relaxed event where students can learn more about Makerspace equipment; Vincent sees this as an opportunity for students to be creative with VR gaming and as a destressor for students.

“I think it is getting more extraordinary by the day,” Vincent said. “I definitely think the event is a step forward to get people in here.”

Uzmann has some workshops prepped to educate students about the equipment in Makerspace and hosts a vinyl cutting seminar every Friday. Both Vincent and Uzmann hope students will see the creative side of Makerspace through these events.

“It’s really friendly and relaxing and I think the more people that know about it, the more people will realize that this is a space to unwind and do what you want to at the University,”  Vincent said.