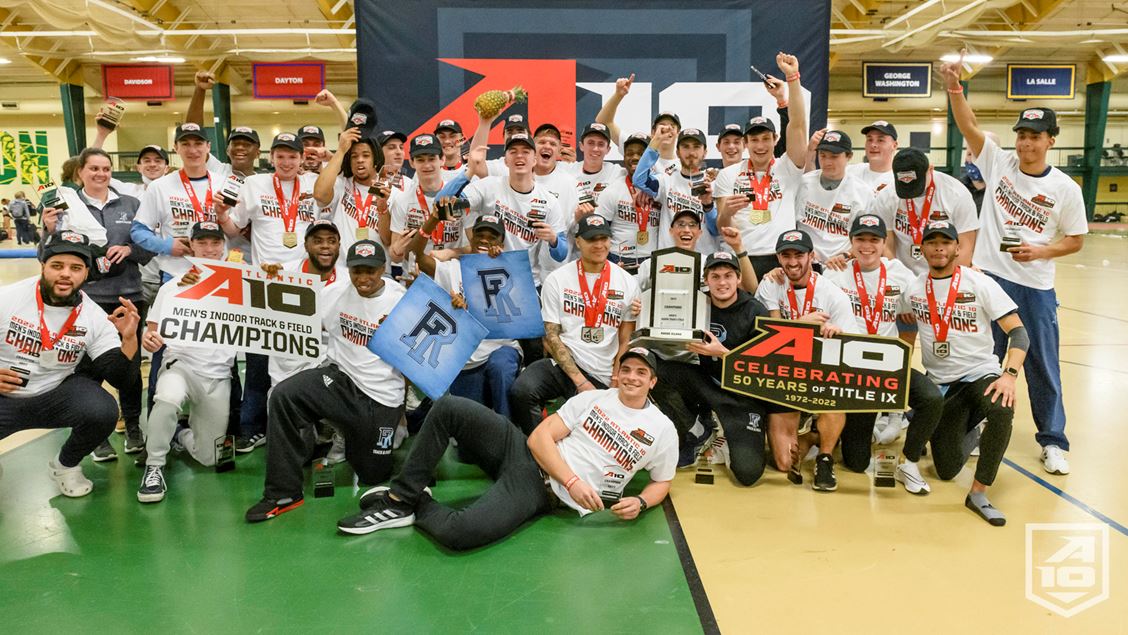 After the 2021 Atlantic 10 Indoor Track and Field Championships were canceled due to COVID-19, the University of Rhode Island Men’s Track and Field Team wasn’t going to let their next chance to compete for a conference championship slip away.

They took advantage of their next opportunity this past weekend, winning their second consecutive A-10 Indoor title. Tallying 199 total points throughout the weekend, URI finished 85 points clear of second-place Davidson, their largest margin of victory since 2000.

The high point tally can be attributed to the Rams’ five first-place finishes in both individual and team events. However, a multitude of close finishes in second and third place were the boost that the Rams needed to be as dominant as they were.

“I don’t think we had a bad performance [Sunday] to be honest,” Head Track and Field Coach Trent Baltzell said. “That’s the reason we scored 199 points. Every single guy was on from the very beginning of Sunday.”

URI started off competition on Sunday with a win when Orion Joyner won the triple jump with a mark of 14.76 meters. That mark was a personal record for the junior that served as the opening jump for the competition and stood as the winning distance.

Mason Brubaker also stood atop the podium when he took first place in the pole vault. Brubaker, who is only a freshman, outlasted two juniors from George Mason to win with a mark of 4.8 meters.

Lucas Plaia also appeared in the win column when he placed first in the 500 meters, finishing in with a time of 1:03.87, 1.39 seconds faster than the person who finished in second place.

However, the main star for the Rams was Collin Ochs, who earned first place medals in two events.

“He’s just so dominant,” Baltzell said. “He’s a special athlete, there’s no doubt. He’s the best mid-distance runner in the whole [A-10] conference. So it is great having a weapon like that on your team — you can always rely on him.

Ochs started off his dual-podium day with a win in the 800 meters, finishing with a time of 1:56.34. According to him, the win was not just another victory.

“It was my first individual victory,” Ochs said proudly. “I knew I had the fastest closing speed at the end so I just let it all out in the last 200 [meters].”

The 4×800 relay victory was even more special for Ochs, however, as he competed alongside teammates Nathan Coogan, Ianique Imboque and Eli Baker. The four runners finished with a final time of 7:44.89.

“The relay was just even more special because I got to share it with my teammates and we all were able to get the gold medal so that was a pretty cool experience,” Ochs said.

When Ochs received the baton in the relay, he had three runners ahead of him with an advantage of several seconds. Ochs knew that he had to leave everything he had on the track to give his team a chance at victory.

“In my head from the start, it was just ‘I’ve got to win this race,’” Ochs said. “As much as I was happy with the gold medal that I got in the 800 [meter], I wanted to be able to share it with these guys.”

Baltzell also believed that his junior runner would be able to trim the distance in the final moments of the race.

“You just kind of knew that he was gonna gobble up the distance and eventually pass all three guys in front of him,” Baltzell said.

The Rams are back in action this upcoming weekend at the IC4A Championship in Boston, MA. The meet kicks off Friday afternoon at 3 p.m.