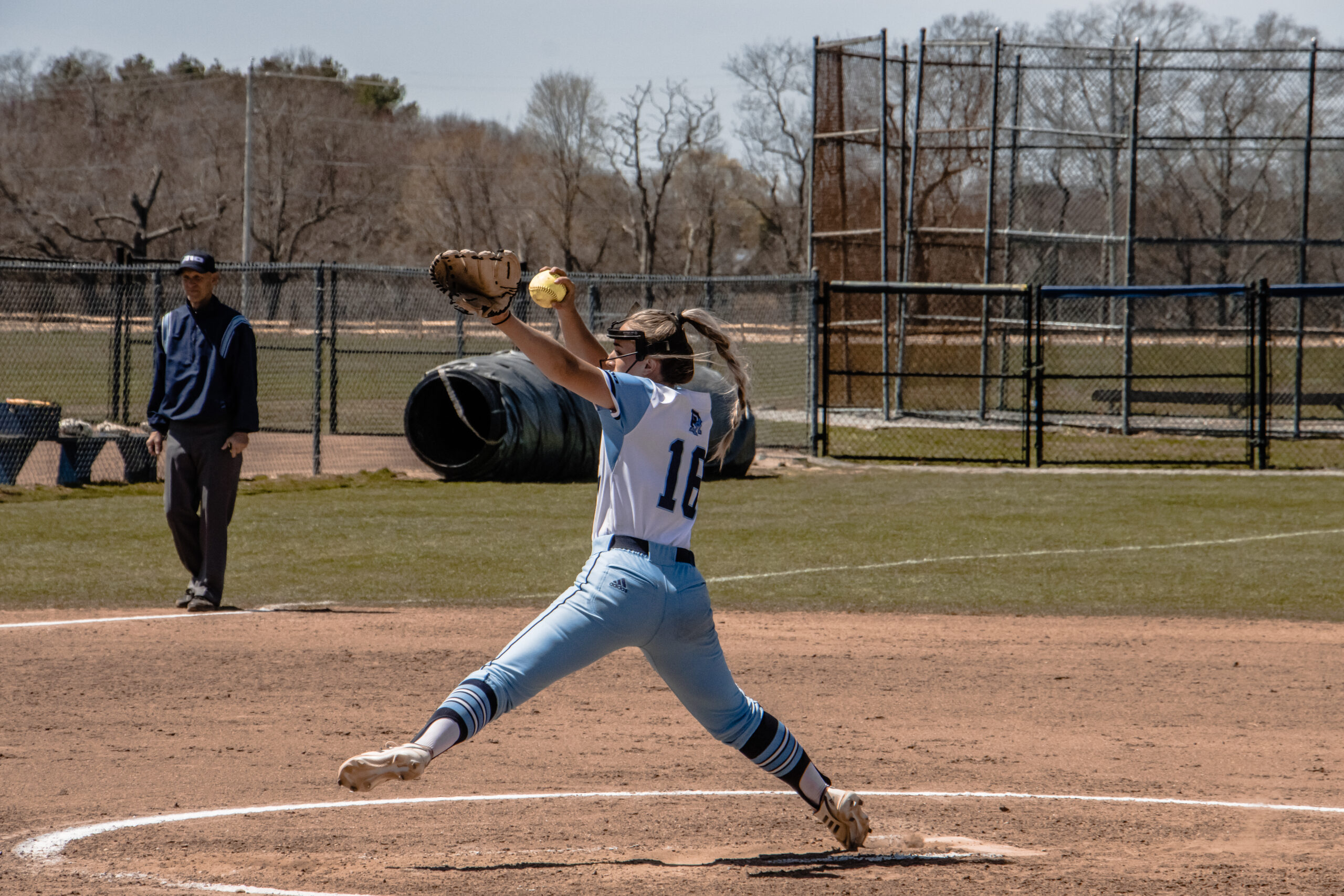 Despite the weekend sweep, the Rams remain in the hunt for one of the final A-10 tourney spots. PHOTO CREDIT: gorhody.com.

The University of Rhode Island softball team returned to conference play this weekend when they took on George Washington, pushing the conference-leading Colonials to the brink in all three games.

The series began with a doubleheader on Saturday. In the first game, Rhody took the early lead in the bottom of the first inning when they loaded the bases and senior Ari Castillo scored after Sami Villarreal was walked to give the Rams an 1-0 advantage to start things off.

George Washington responded with a run of their own in the top of the second, but it didn’t take long for the Rams to retake the lead when a single from freshman Leilyn Alvarez scored Skyler Rapuano to make it 2-1.

The Colonials responded once again and tied things up at two in the top of the third inning off a home run. The next three innings remained scoreless as the Rhody defense held strong going into the fifth inning.

The game opened up in the top of the fifth inning when the Colonials took the lead with a double by Alexa Williams. George Washington extended their lead to 8-2 off of a grand slam from Williams and that’s where it would remain for the rest of the game.

Game 2 was a very different game. The Colonials jumped out to a quick 2-0 lead and, after a run from the Rams, broke things wide open.

The Colonials piled on seven runs in the second inning, giving them the 9-1 advantage. Soon after, the Rams rallied, scoring four runs in the bottom half of the inning. The first run came from a sacrifice fly from sophomore Ainsley Yoshizumi that drove in Villarreal. Rachel Zingerman, who had four hits in the second contest, had an RBI single to make it 9-3. A few more errors from George Washington allowed the Rams to tack on two more runs and make it 9-5.

The Rams continued their rally in the bottom of the fifth inning when freshman Emily Power drove a run home on a sacrifice fly. Zingerman then scored two runs with another single and Yoshizumi scored the tying run by stealing home to make it a 9-9 game. Head Coach Whitney Goldstein noted that this continued fight is something she has been preaching all year.

“I always tell my players that they can never hang their heads,” Goldstein said. “We have shown that we can compete with the best, we just have to focus on making smart plays and we can win some of these games.”

The tie was short-lived as the Colonials poured in six more runs in the top of the sixth inning to make it 15-9. Rhody added one more, but couldn’t reignite a second comeback and dropped the second game of the doubleheader 15-10.

In the rubber game of the series, the Rams got off to another quick start, scoring the first three runs of the game off singles from Rapuano and Yoshizumi.

George Washington responded with four unanswered runs of their own. Castillo homered in the bottom of the fifth inning to tie the score, but five runs in the final inning from George Washington overwhelmed the Rams and allowed the Colonials to take the weekend sweep.

Despite tough losses in each of the three games, Goldstein saw huge signs of progression.

“I don’t care about the wins and losses,” Goldstein said. “We have asked these girls to do some really high level things and it has been awesome to see them get better as the season progresses.”

Zingerman emphasized that the competition was tough but that the Rams have played well despite the results.

“We knew this weekend was going to be tough but we just wanted to play as hard as we can,” Zingerman said. “We are just focused on winning the rest of the games so we can make the A-10 playoffs.”

The Rams split a doubleheader Wednesday against Brown, winning 6-5 in extra innings then losing 1-0. Their next series is on the road against George Mason over this weekend with the first game starting at noon on Saturday.