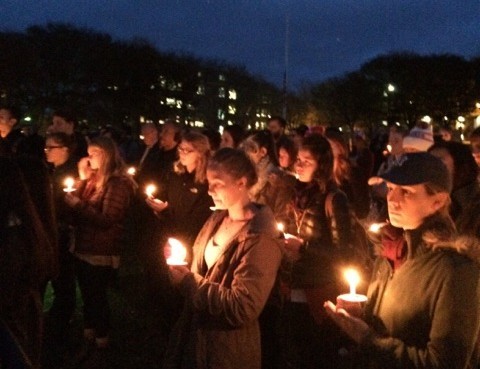 The recent attacks in Paris by the terrorist group ISIS were mourned on the quadrangle of the University of Rhode Island by students and community members in a candlelight vigil last night. Speakers at the vigil warned the audience about their reactions to such tragedies, and pointed out that Paris is not the only victim of these terrorist acts.

Pascale Charpenet, a student who lives in Rennes, France, and studied at URI in the Spring 2015 semester for a semester abroad, was in France at the time of the attacks. While she was not in Paris, she heard about the attacks on the news while having dinner with friends.

“At first, everything was just about fear, panic and anxiety because we were following the assault against the terrorists in the Bataclan in real time,” Charpenet said. “Then everyone started to check on all their relatives in Paris to see if they were okay. We were also following everything on Facebook, everyone was reacting in their own way: words, drawings, videos. Then the president [Francois] Hollande said that France was now in war against ISIS and that an ‘emergency state’ would come.”

Though she was not personally affected by the tragedies in Paris, Charpenet said that all of France was in mourning the following day, especially as it was the second time France has been in attacked in less than one year. She continued that the people of France, including herself, were touched by the world’s reactions and support, which she said demonstrated “international solidarity” against the terror attacks.

“The terrorists are trying to make fear rule but we have to resist by going on,” Charpenet said. “We need to live as we used to be, to love and to enjoy life; because ISIS is against love and life and I don’t want to see them win…in the long run, I think there will be more security and more control in the country, more policemen and military, but I hope that will not be at the expense of freedom and human rights.”

Nasser H. Zawia, dean of the Graduate school at URI and founder of the Kingston Muslim Community Center, spoke on behalf of the Muslim community and warned against the same expense of rights which Charpenet referenced. Zawia said that he wanted to “leave no doubt” that Muslims are against the terrorist acts in Paris. Despite their shared religion, the vast majority of the Muslim community does not hold the same values as members of ISIS. He also said that ISIS has killed hundreds of thousands of Muslims, blown up mosques and attacked hospitals.

“So I want you to really reflect on this: these are enemies of humanity,” Zawia said. “They [terrorists] are not enemies of just one faith or one people, but they kill everyone to further their own agenda. And please remember that us as Muslims living among you, we do not share anything with these individuals. We share the values that you have and we are folks just like you are.”

Because the media often connects ISIS and other terrorists to the Muslim faith, Zawia warned the attendees of the vigil to remember that Muslims here in Rhode Island and globally are a part of the community and are “at the forefront of this fight.” Zawia also said people will react to this tragedy by damaging mosques or hurting Muslim persons who do not share ISIS’s values.

“So in addition to the grief, the hate and the condemnation that we have for these groups, we also want to be like you and we want you to view us like we are part of the community,” Zawia said. “We should not have to fear retaliation from those who are angry or those who misunderstand us.”

There was also a reading in remembrance of the students killed in the attack at Garissa University in Kenya by Gitahi Gititi, professor of English, film/media and Africana Studies at URI. Gititi referenced the millions of people in Africa who lives have been taken or have been displaced by genocide and terrorist groups. He urged the audience to act preemptively to defend themselves against all violence and hatred.

“We mustn’t become like families who get together only when there is grave sickness or death in the family,” Gititi said. “We must remember all people whenever they are faced with catastrophe or disaster. And while our sights tonight are on France, they should also be at home, where terrorists attack or terror attacks are not unknown. This university must also join other universities in combatting domestic violence and racism… And, we must not only condole with those who look like us, or worship the same god.”

The tragedies of other countries were commemorated at the vigil as well, including a poem read in Arabic by URI engineering student Asma Sammoura for the victims in Beirut, Lebanon. And there was a reading said in both Russian and English by Nicolai Petro, a professor of comparative and international politics, in honor of the victims of the Russian plane crash in Egypt.