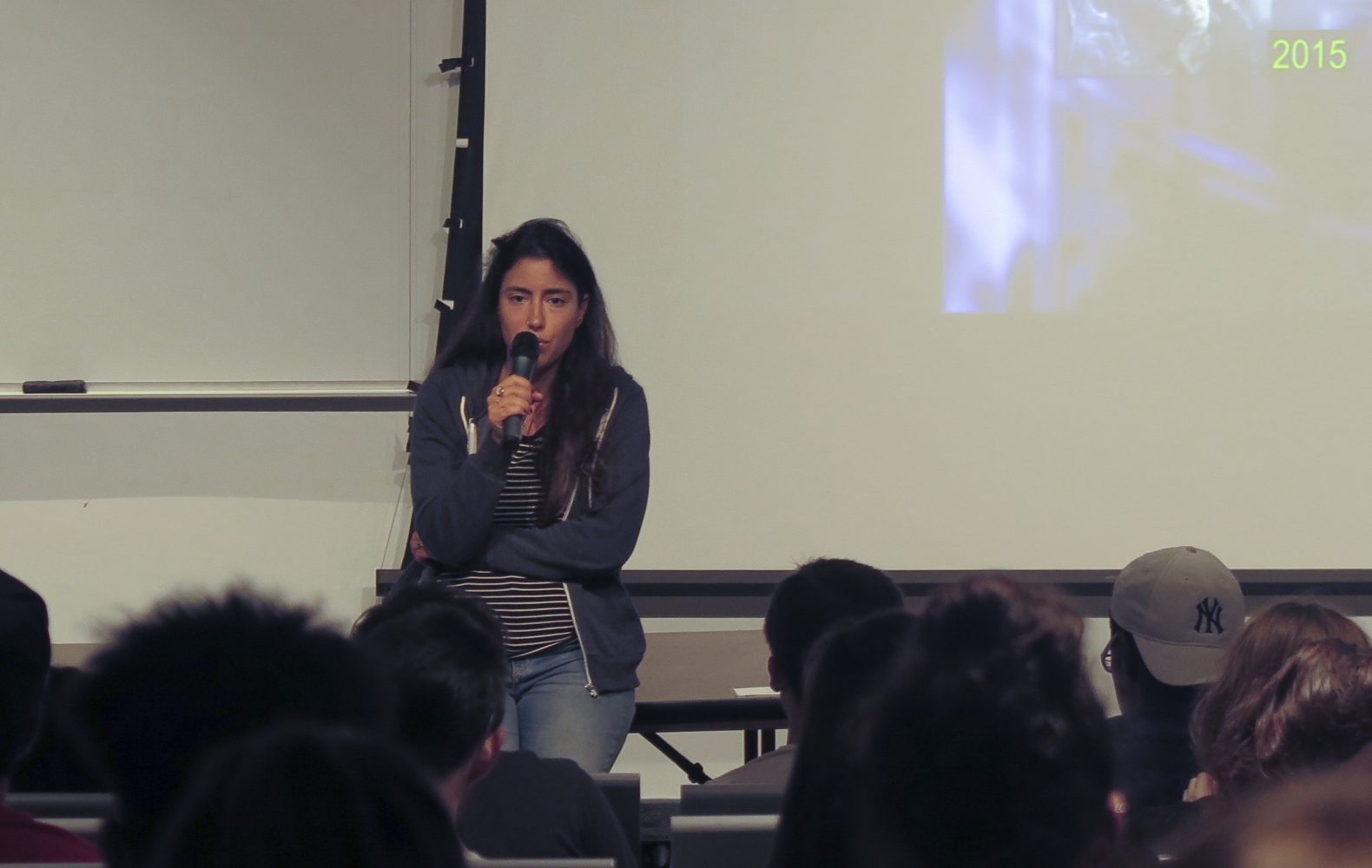 By: Jordan Miller and Rob Clark

On Monday, Oct. 2, a couple of Israeli films were presented by the University of Rhode Island Hillel Center.

Following an introductory speech from Amy Olson, the executive director of Hillel, the floor was handed to Tamar Kay, who introduced herself as the writer and director of the first film of the night- a dramatic documentary short entitled “The Mute’s House.” Tamar, along with the other filmmaker Or Sinai, is a graduate of the Sam Spiegel Film and Television School in Jerusalem.

Set in the city of Hebron, West Bank, which lies on the border between warring Israel and Palestine, the documentary focuses on one small, derelict building, known colloquially to the soldiers who patrol the volatile area and the tour guides who take tourists through as “Beit Ha’Ilmet”- The Mute’s House. This house- the sole remaining inhabited house in that part of the city, is not home to mutes, but rather a deaf woman named Sahar Rajabi and her young son, Yousef. Kay captures Sahar and Yousef living as the only people in their respective building, caught between the ongoing and violent conflict between Israel and Palestine.

Kay originally met Yousef and Sahar as part of a news report early on in her career. It was only years later that Kay decided that she wanted to make a documentary and she returned to Yousef. She contacted Sahar and Yousef and they agreed. Kay brought in a very small crew to help her film the daily life of Yousef and Sahar.

“I felt [the small crew] would create a more natural feeling,” she said. Kay touches on the narrative she wanted to create about Yousef and Sahar, saying, “I didn’t want to bring my own narrative.”

Kay put a large emphasis on telling the story of Yousef and Sahar without all the glitz and glamour, just the barebones story of this poor family caught in the middle of political turmoil. She wanted the audience to feel the emotions that this child and his mother felt from day to day without all the glitz and the glamour that comes with filmmaking. It was all about bringing the audience into the world of Yousef and Sahar Rajabi.

The second film shown is “Anna” by Israeli filmmaker Or Sinai. The story is as follows: When Anna’s son stays with his father for the night, Anna must find a way to occupy herself without her son. After her boss refuses to let her work a second shift, Anna is given the night to herself. In looking for ways to occupy herself, she eventually finds herself in a quest for sexual fulfillment.

We had the chance to speak to the creator of “Anna.” Sanai is a young Israeli filmmaker. When asked about filming the sex scenes in her short film, she said she felt somewhat uncomfortable. She reiterated the point that when filming sex scenes, they need to be “well thought out and extremely precise.”

Originally, this movie started as just trying to tell one night in Anna’s life, but Sinai wasn’t sure what was going to happen to Anna. Anna’s story was always going to be about her being lonely in a run down neighborhood. The idea for sexual fulfillment actually came from a different documentary that Sinai was working on.

This particular documentary was about a woman also wanted to have sex like Anna but had no idea who to have sex with. So, Sinai worked with this woman to create her a little dating site. When that idea went up in smoke, the woman called her electrician and proceeded to have sex with them. When Sinai heard this story, she was immediately inspired to finish the story of Anna.

Originally, Sinai had Anna having sexual relations with her electrician, inspired from her documentary, but later changed it to a local plumber. Sinai wrote a very interesting story in which the woman is the sexual hunter and the men are portrayed as prey for Anna, which is very different from current society.

Sinai and her cohort Kay mark the signs of a rise in Israeli cinema. When asked about this growth of Israeli cinema, Sinai reiterated the spreading of film in Israeli culture. Though it’s hard for her to speak for her entire generation of filmmakers, she notes that there are a large amount of film schools for such a small country like Israel.

Sinai has screened her film to numerous audiences as well. When asked about the different audience reactions she’s received, she noted that people laughed in places that she didn’t expect. While she doesn’t view the film as a comedy, she has noticed some moments of levity within her film. She also touched upon how different U.S. audiences are from European audiences, noting how Europeans aren’t shocked to see nudity and sex portrayed in film, whereas Americans are very squeamish about seeing sex and nudity in their films.