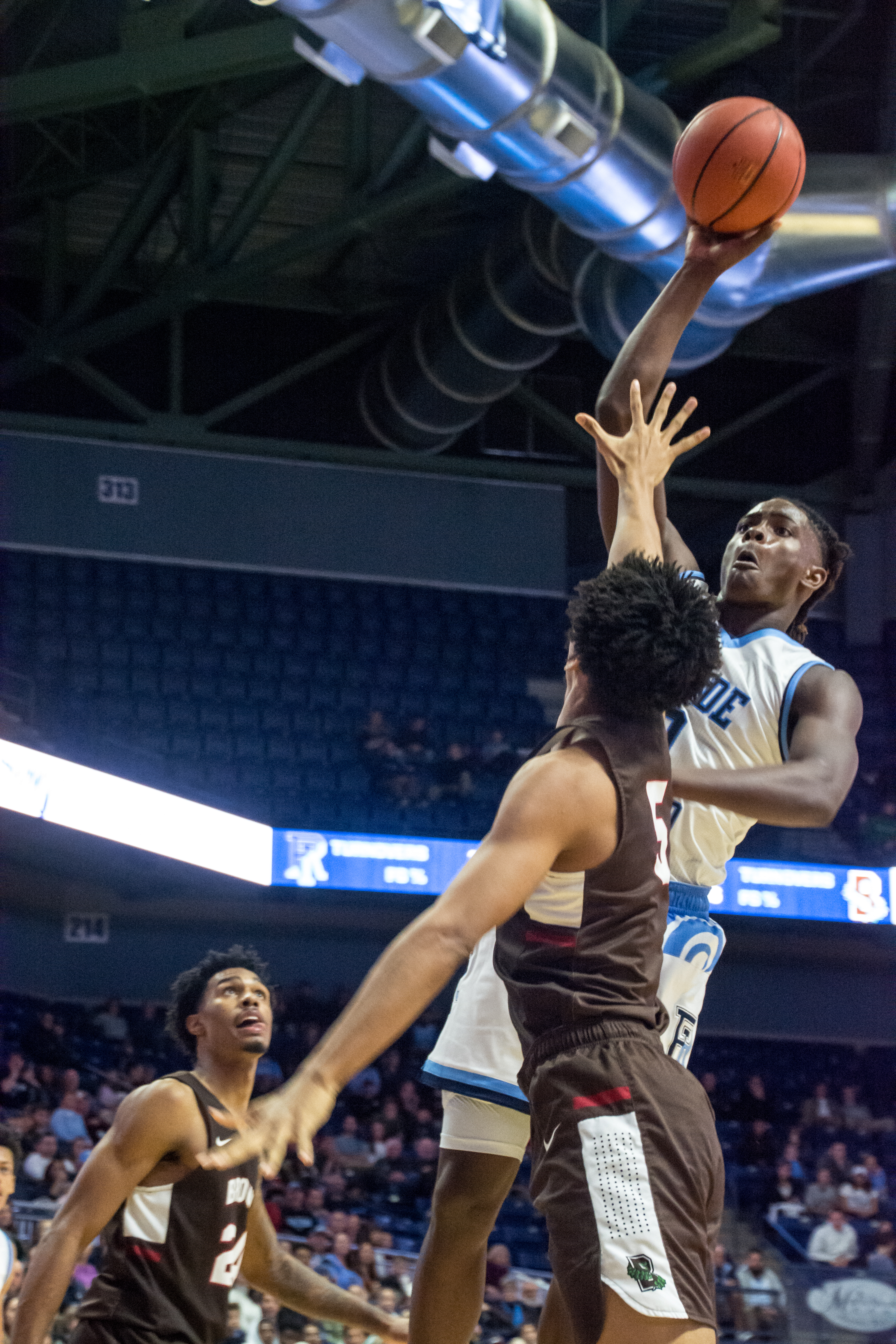 All is well in Kingston. At least for one night.

After just their second home loss in two years, this past Saturday against Stony Brook, Rhode Island Basketball disposed of the streaking Brown Bears Wednesday night, 71-51.

Rather than the duo of Fatts Russell and Jeff Dowtin, it was the frontcourt getting the job done for Head Coach David Cox against the Bears.

In what will be remembered as his coming-out party in Rhode Island, Freshman Jermaine Harris tallied 15 points on a perfect 6-for-6 shooting from the field, and fellow forward Cyril Langevine led all scorers in the game with 19 points. Langevine also led the game in rebounds with 17, 12 of them coming on the offensive end.

“Obviously Cyril had outstanding numbers tonight,” Cox said. “It was just a matter of time for things to click for Jermaine. We gave him the ball today, and he was very effective.”

“The game has definitely slowed down,” Harris said. “I’ve been taking a lot in from the older guys.”

Brown came into the night on a five-game winning streak, led by sophomore guard Desmond Cambridge. Cambridge, who was averaging 15.9 points per game, was held to just seven points on 2-11 shooting, a result of the swarming defense from Rhody’s backcourt.

“We told [Thompson] to stay close,” Cox said on guarding Cambridge. “Stay close, be there on the catch. He was there, and he contested every shot the kid took.”

Between Russell, Christion Thompson and Omar Silverio, Rhody’s guards had 10 steals on the night, five of them from Thompson himself. Brown turned the ball over a total of 18 times, which led to 15 points off of turnovers and 9 fast break points. Their grit tonight paid off on the rebounding battle as well, as they finished with 53 boards on the night.

With his night, Langevine has had three straight double-doubles and is now averaging 14.6 points and 11.2 boards per game.

“I’m very confident, as you can see,” Langevine said. “I’m averaging a double-double now, I’ve been waiting so long for this. Every night, going out there and playing with confidence- I know Coach Cox trusts me.”

The 20-point victory comes at a great time for Rhody, as they travel to Providence College on Saturday for their annual rivalry game with the Friars. Last season, Rhody was able to defeat PC in the Ryan Center, thanks to 20 points from Russell and outstanding play from the seniors.

“I don’t want our guys to get too emotional about it,” Cox said. “We are a young team, and it’s all about getting better every single day. If we prepare correctly tomorrow, have another good practice on Friday, we have a legitimate shot of beating this team. But we just need to keep getting better, day by day, and we got better this week.”

Cox, an associate head coach under Dan Hurley last year, will have the reigns of the team for the first time at the Dunkin Donuts Center.

“I’ve been on the losing end of some very heartbreaking losses,” Cox said of the rivalry. “I’m excited for the first time being the lead guy on the sideline. I like the fact that we’re going into the Dunk- into hostile territory. I’ll be able to see how I respond and we’ll see how these guys respond as well.”