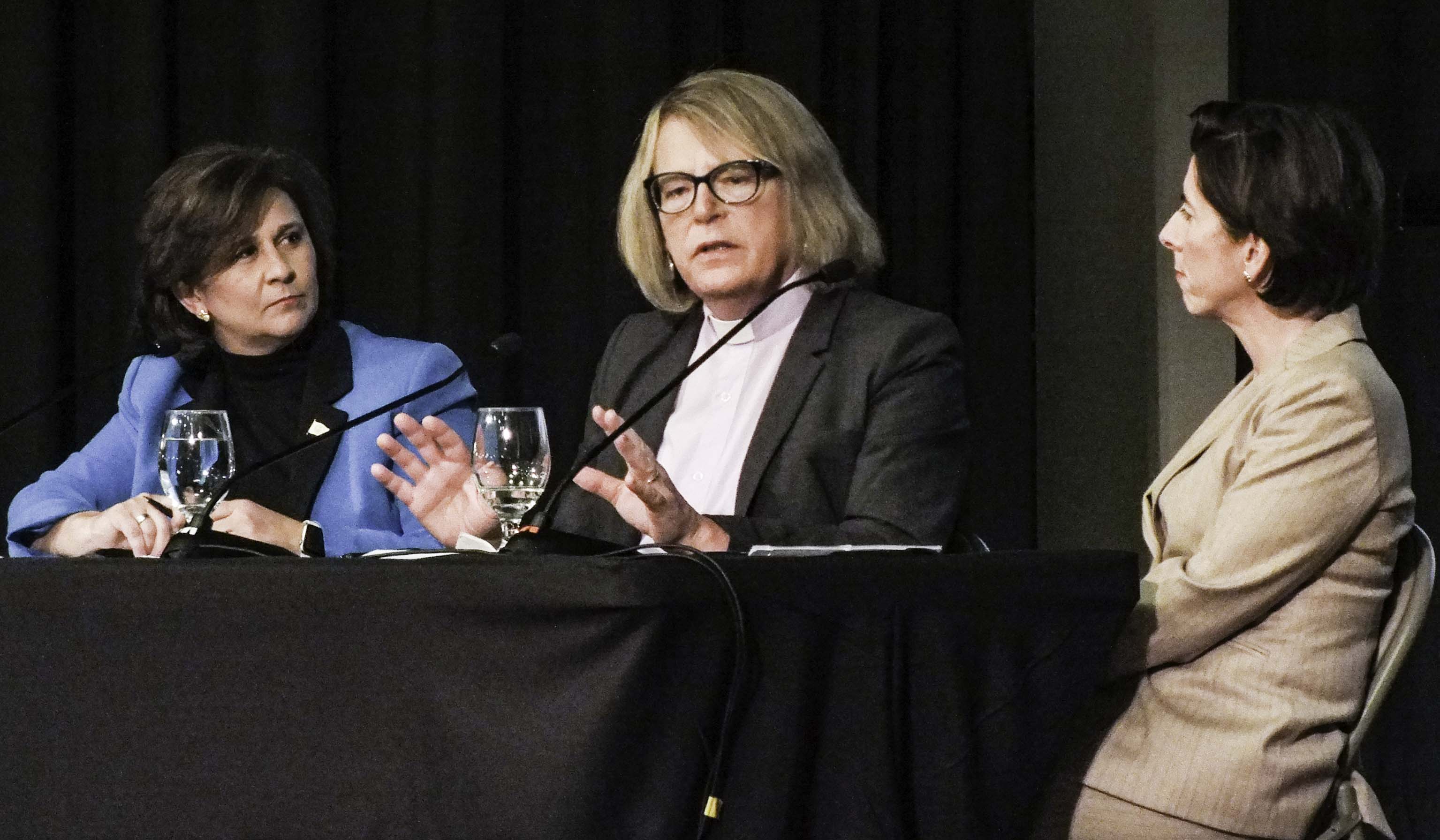 The panelists were Governor Gina Raimondo, Rhode Island’s first female governor, Secretary of State Nellie Gorbea, the first Hispanic statewide elected official in both Rhode Island and New England who was also recently re-elected, and Rev. Dr. Donnie Anderson, a transgender woman who serves as the executive minister for the Rhode Island State Council of Churches, a group that advocates for social justice issues. URI professor and commentator for The Public’s Radio Maureen Moakley moderated the event.

The discussion and audience questions largely focused on how gender affects women who work in the political field, and how gender can be reimagined to include a more diverse series of voices.

“There’s no question,” said Raimondo, “that bias exists and that it’s harder for women, we’d be pretending to say differently.”

Gorbea noted that even at the legislative level within the state, there are barriers for those who serve as caregivers for their family. Rhode Island’s legislature meets Tuesday, Wednesday and Thursday starting around 3:30 p.m., and it can go very late at night. “If you’re a caregiver of children, for example, that’s exactly when you’re needed at home to deal with stuff,” Gorbea said. “Women tend to be caregivers. Was the structure set up to keep women away from being legislators? Possibly, possibly not, but it has that effect.”

The governor had talked about the old-fashioned ideas of gender and how we need to move away from those beliefs. Anderson said, “Our understanding of gender is so wrapped up in these roles that we’ve historically assigned, we really need to just blow that up.”

“I constantly get asked the question, ‘So what are you?’” said Raimondo. “‘Are you a warm, fuzzy mom or are you a hard-charging executive?’ Both, it’s okay and it’s possible to be both. Don’t try to conform to some image of something, some old-fashioned image of leadership. Be who you are and be that leader.”

Anderson said that she urges people to make their greatest contributions to society and explore who they are. “When we allow each other to do that,” Anderson said, “then that person is able to blossom and then they are able to make a contribution that’s far greater than any role that we can superimpose upon people. This is an amazing opportunity for us to be able to expand our roles.”

There was a strong message of optimism, however, for the ideas of a changing gender norm in politics, and in the state as a whole.

“My experience has been absolutely amazing,” said Anderson about having come out as transgender two years ago at age 69. “Shortly after the word got out,” Anderson said, “I got a telephone call. ‘This is Gina Raimondo. Just wanted to talk to you and let you know we’re with you.’ I mean, how many states would that happen?”

Gorbea said that one of the most important aspects of her campaign was the diversity.

“I ran on a campaign where I basically said that our best public policy decisions come when there’s a diversity of opinions, perspectives, and backgrounds around the policymaking table,” said Gorbea. “Yes, it takes a little bit longer, but the solutions are much better.”

All three women had mentioned how important it is for young people to change and better the world.

The women all agreed that, in order for change to happen within the government in regards to gender, there needs to be a more diverse group of people at the table, and it can’t turn into an us-versus-them situation.

“This isn’t about excluding men,” said Raimondo, “it’s about including everybody else. It’s about making room at the table for everybody, and unfortunately too many of the tables I’ve sat at in my career are all men, are all white men.”