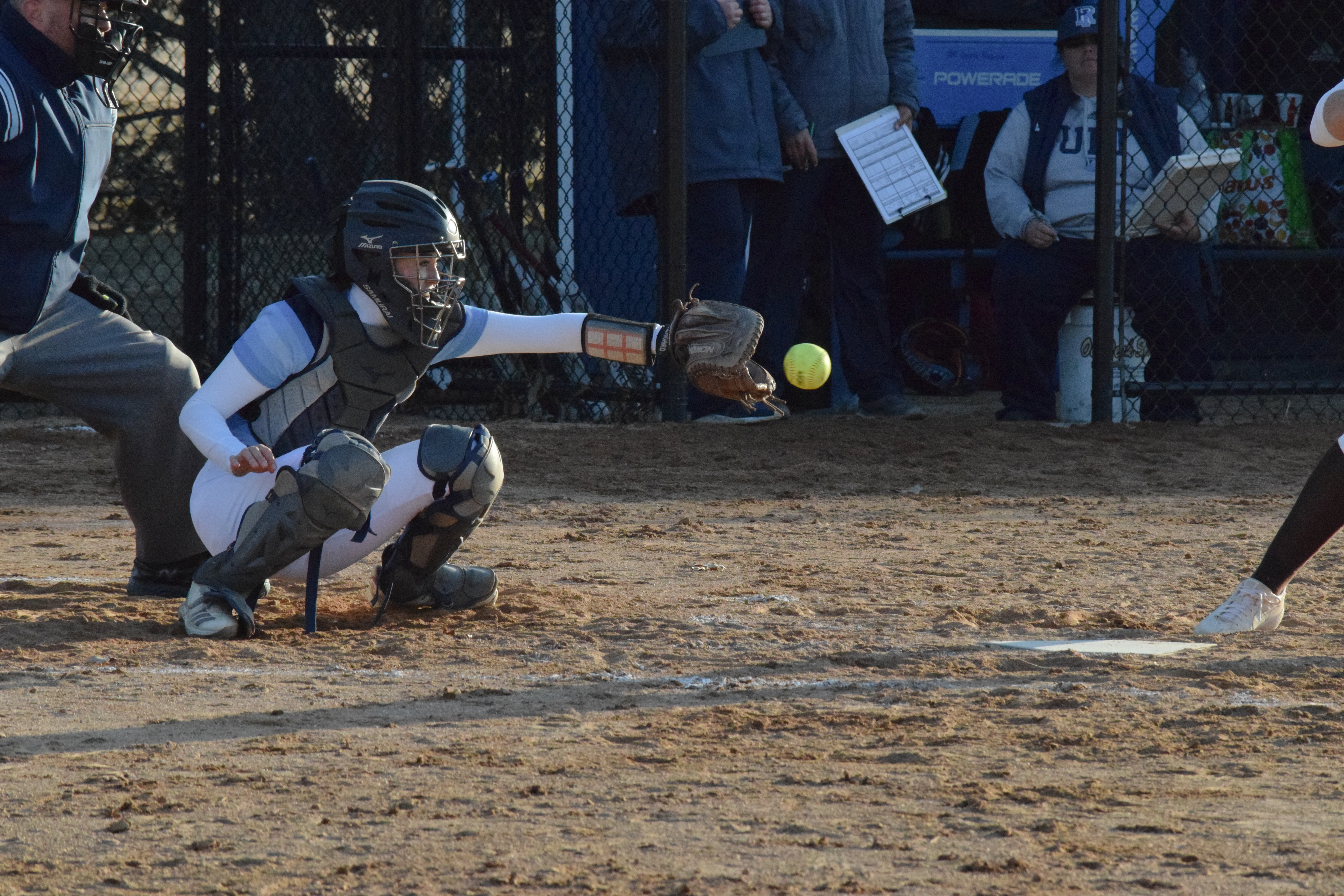 Freshman catcher Susan Harrison gets ready to receive the pitch during Softballs home opener against Brown this past Wednesday. Photo by Anna Meassick.

The University of Rhode Island softball team entered Wednesday’s matchup against Brown riding a three-game win streak and improved it to four in a row after defeating in-state rival Brown 3-0.

The Rams started out strong in the bottom of the first inning when outfielder Sami Villarreal walked onto first base and immediately stole second. The excitement continued when Ari Castillo hit a double into left field, collecting an R.B.I and allowing Villarreal to score.

Entering the top of the second, shortstop Ari Castillo picked up the double-play, promptly following with a ground-out. In the bottom of the second, Erika Yeager hit a single, soon to be followed up by Rebecca Simms’s double and R.B.I to send Yeager home. This advanced the Rams lead to 2-0.

Going into the third, Susan Harrison doubled into center field, collecting the R.B.I., and allowing Erica Robles to score the game-winning run.

Vocalizing her team’s performance, Head Coach Bridget Hurlman said, “[They] did very well out there today.”

Sarah Gunderson took command of the mound early. She procured five strikeouts and extended her scoreless streak to 15 and two-thirds innings. This brought her E.R.A. down to 2.83. This rendition of forceful pitching by the Rams was the fifth shutout of the season. She only allowed only five hits. She improved her record to 4-4 on the season.

“Our pitching was really strong,” Hurlman said. “Sarah had a strong performance today.”

This is a quick turnaround from earlier in the season. On February 28, their overall record was 2-8.

Today was the 60th meeting between the Bears and the Rams. URI has 36 wins. Rhody has only played two teams more often: UMass Amherst (104) and Connecticut (63). Last season, the Rams won 3-1 against the Bears, and in 2017 Brown swept a doubleheader.

In personal achievement Rhode Island freshman Ari Castillo was named the Atlantic 10 Co-Rookie of the Week this past week. During the Maryland Invitational Castillo tore it up as she went 9-15 at the plate including two home runs.

Castillo joins her two other teammates, Villarreal and Faith Musselwhite to earn A-10 Rookie of the Week honors. The three newcomers have combined for 95 hits, 52 runs scored, 18 doubles, 12 home runs, 49 walks and 46 runs batted in already this season.