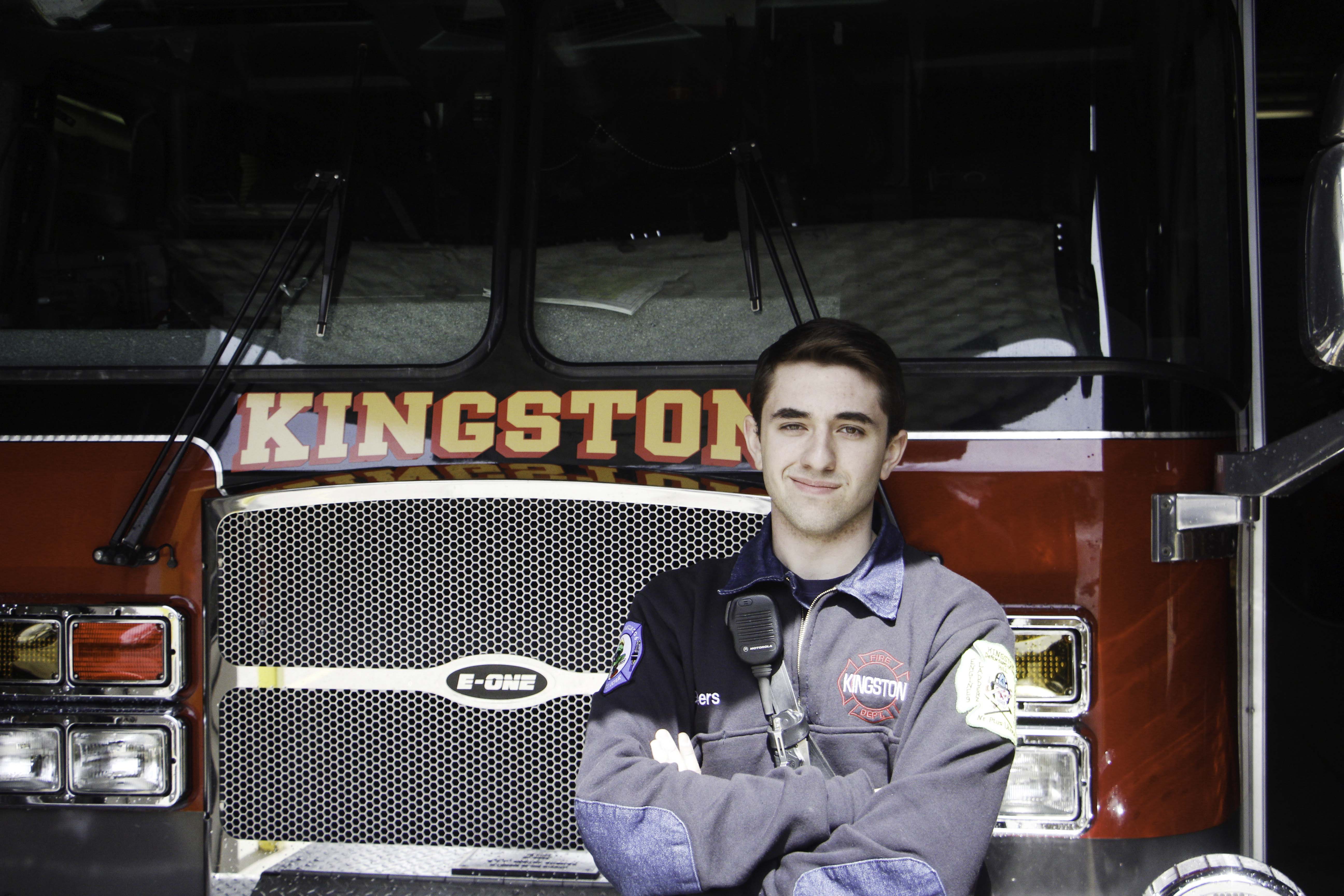 David Demers serves as a volunteer firefighter while being a full time college student. Photo by Greg Clark.

David Jonathan Demers, a nursing major at the University of Rhode Island, is also a volunteer firefighter for the Kingston Fire Department.

On top of a rigorous course load, Demers is a resident firefighter for the only residential fire station in Rhode Island. Living at the station, Demers runs the station, drives the vehicles and performs the duties of an EMT when needed.

The fire station has 20 people at the core, although it varies in number of people. The volunteers are either URI students or outside volunteers. The station covers 1.6 square miles, but the volunteers go anywhere near that needs help. The station is located at the top of URI’s Kingston campus.

When asked what inspired Demers to become a volunteer firefighter, he explained several reasons. When talking about his initial decision to volunteer he said, “I decided to love the fire side of things.”

Demer’s mother was a volunteer firefighter at a station in South Kingston. She rode the URI Eurika truck and also the URI community ambulance. Demer’s mother being in these important positions inspired him to volunteer.

Volunteers in positions at the stations receive paid housing and every time they work a shift are provided a meal.

“There are incentives for people,” Demers said. “We offer tuition reimbursement as well.”

In addition to this, Demers loves the overall experience. He began training in October of 2017 and finished in June of 2018. From the beginning, Demers found this atmosphere to be something he really enjoyed.

One very tough part of being a volunteer firefighter is the training. The tough hours, training to drive and EMT training is time-consuming and tough.

“The training is pretty rigorous because we train to the standard of the firefighter position,” Demers said.

Each volunteer is trained in all scenarios that a firefighter could possibly face. Knowledge of the buildings and roads on campus is extremely focused on. Learning to drive the heavy rescue, engine and ladder track is very different from driving a normal vehicle. The driver is essentially the one who runs the fire scene; this is the most critical part.

Another challenging part of being a volunteer firefighter is never knowing what the size of the crew will be.

“You never know how many people you are going to have coming in,” Demers said.

It is only required that one person is at the station at any given time, although this is a rarity with volunteers always responding with their cars if needed.

This is a challenge because as a volunteer you need to know how to work in a group and also alone, if necessary. Demers recalled several calls where he has been completely alone.

Even when not on call, volunteers are required to respond to an emergency call. Demers says both his major and his volunteering are tough commitments, requiring a lot of time and work.

Working up to two or three shifts a week, Demers has grown used to going to the library when off duty as well as becoming accustomed to the sleep lost.

According to Demers, about 70 percent of departments of this station runs on the selfless work of its volunteers. “There are a lot of small communities that work by having people volunteer,” Demers said.

“I joined the department in 2008 and continue to volunteer after graduating in 2010,” Brierley said. “Kingston Fire Department has been a huge part of my life as it is with most who join the department,” Brierley said. “But I have to say that the best thing that Kingston has to offer is the huge family that you gain. The men and women I have come through with will always be a second family to me.”

Demers hopes to continue being a volunteer firefighter until he graduates and after if time allows. Demers loves his station and said that, “We love people to be there,” encouraging anyone interested to contact recruitment@kingstonfire.net.