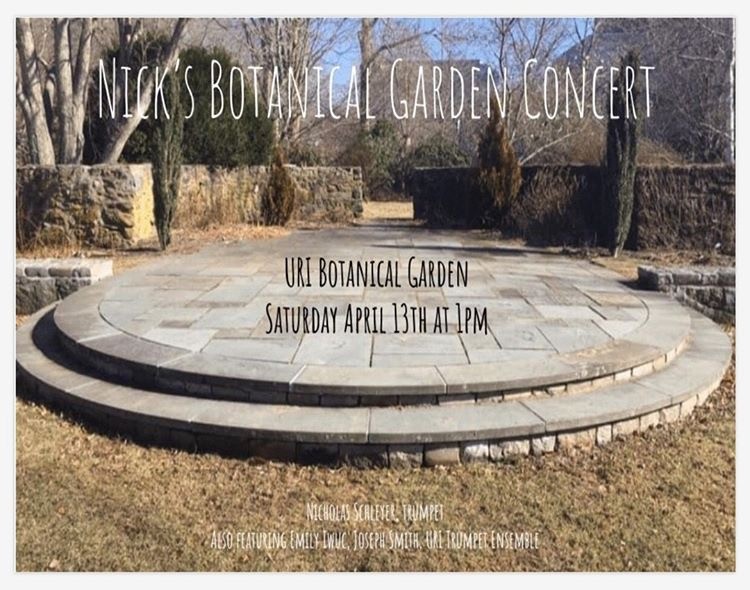 On Sat. April 13, Nick Schleyer, a junior at the University of Rhode Island, is hosting an hour long trumpet concert at the URI Botanical Gardens.

Schleyer created a program for the event that showcases a plethora of pieces performed by trumpet players, including himself. This includes solos, duets and an ensemble at the end of the concert. Schleyer will be performing in every piece throughout the concert.

“I put together pieces I have been working on throughout the semester and pieces that I have always wanted to play,” Schleyer said.

Schleyer stated that he received plenty of great feedback from peers, professors and the music department itself, in order to put this concert together. His motivation and cooperation from others has allowed him to piece together the first ever concert that is hosted at the URI Botanical Gardens. Schleyer wanted to give students and the Rhode Island community a different experience.

“The fact that it’s never been done before, it’s a beautiful space,” Schleyer. “People have always been asking, ‘Why don’t they do things at the botanical gardens?’ So I decided I am going to do it and put it together. Thankfully I have enough people willing to join in on the project.”

With this overwhelming support, Schleyer was easily able to put together the concert. Schleyer also received support from Don Devoe, a URI alumnus. Don Devoe graduated from URI in 1995 and is currently an elementary school teacher. When deciding on pieces to perform at the concert, Schleyer came across a piece named, “Soliloquy” by Don Devoe.

“I went through the depths of the music library and I found this piece for a solo trumpet. There’s a lot of improvised parts where he gives me a set of notes and I get to make melodies,” Schleyer said.

Schleyer has decided to start the concert by performing this piece by himself. Devoe originally composed the piece for his senior concert at URI in 1994. After he performed it, no other person has played this piece, making Schleyer the second person to ever perform it.

“The piece has two very contrasting characters,” Devoe said. “The first is melodic and very subdued and it uses a Harmon mute, which is a mute put inside the trumpet. The contrasting part has aleatoric, which is close to improvisation but in an aleatoric setting the composer gives suggestions.”

Devoe put a lot of hard work and thought behind the title, the meaning and the characteristics of the piece. This is why Schleyer has decided to open his concert by playing this piece. Devoe even put thought into what story the piece is portraying to its audience.

“Soliloquy is meant to be a thought within a thought. So the first part seems like it is reflective where the performer is thinking about something but then it turns out the second part of the song is actually a reflection on the first part,” Devoe said.

Devoe has responded with an overwhelming amount of support for Schleyer and is more than happy for Schleyer to perform with his own interpretation. He hopes to attend the concert as well, in order to be able to go back to his music roots and hear his piece from a different perspective.

The concert has a rain date set for April 14 at 1 p.m. Admission is free and students can find more information on the event on Facebook under, Nick’s Botanical Garden Concert.