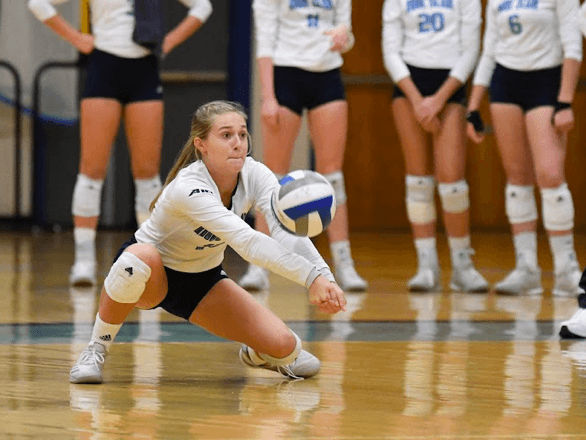 Ella Ratzloff goes down for a dig. Photo by James McIntosh.

During her freshman year, Ratzloff finished the season with 203 digs, which ranked her third on the team. Her sophomore campaign has been even better. It includes a virtuoso performance in a match against Fordham, where Ratzloff blew away Rhody’s previous single-match record for digs in a game of 34 with 42 in that contest.

“When she does the things she’s good at, the sky’s the limit,” said Head Coach Steve Santonastaso.

Last year, Ratzloff played defensive specialist, not her current position of libero, meaning her playing time this year has doubled.

“This year, I really was focused to take the opportunity and not take it for granted,” said Ratzloff. “I only come off the court one time for 30 seconds.”

Ratzloff’s work ethic is another major reason for her success in her sophomore season.

“Her work ethic is high,” said Santonastaso. “Her determination to become a better volleyball player is high and her risk to expand her comfort zone and acquire these new and outlying skills that are just a little bit different, different or new to her is, I think is scary for everybody. She’s got high effort, high motor. Regardless of what we are asking her to do, the work ethic is at a high level.”

The determination and competitive fire that Ratzloff possesses is what she believes may be her biggest strength.

“I am a super competitive person,” said Ratzloff. “I’m always looking at the stats, like ‘who’s number one in digs in the conference right now?’ The last I’ve looked in just Atlantic 10 games, I’m first. I will go into a wall for the ball. I hate seeing the ball hit the floor, so I will be the first to chase it down.”

Ratzloff has been playing volleyball since third grade. In what is now her 12th year of playing the sport, she has always been the libero. Her mother has been a huge part of her identity on a volleyball court. Brenda also played college volleyball and is now a coach. Ratzloff currently leads the team in digs, with 336 on the season, 181 more than the next closest on the team. She averages just over five a set.

Not only driven by individual success, Ratzloff’s goals include for the team to make it to the A-10 tournament and beyond.