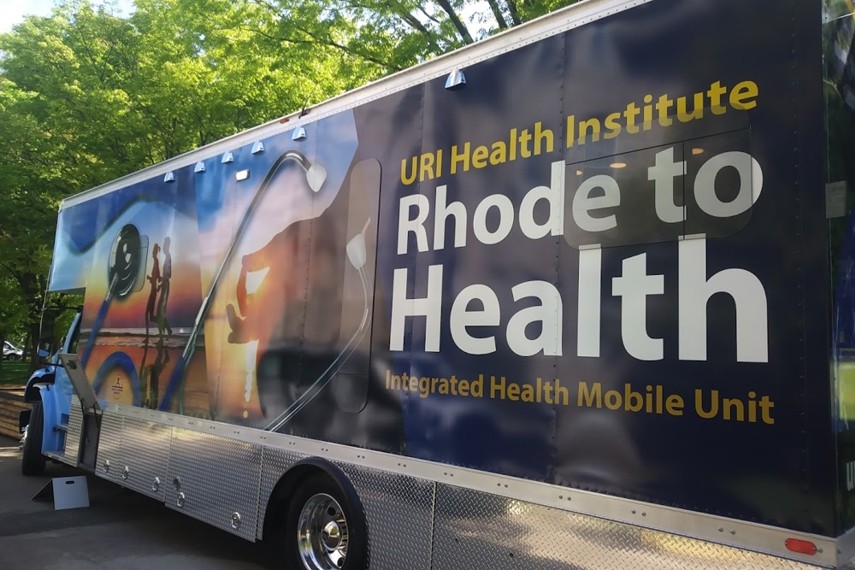 The Rhode to Health mobile unit is facing several setbacks and has not been in use for weeks. Photo from URI.

Last year, the University of Rhode Island unveiled the Rhode to Health mobile unit, but recent setbacks have largely prevented the unit from being taken into the communities that it is intended to serve.

The vehicle was officially ready for use in November of 2018. The unit is intended to travel to various communities in the state and provide healthcare for those who may not have access to it.  It is parked on campus by the Fine Arts Lot when it is not in use. For the past several weeks, the unit has not left campus.

Brian Blissmer, director for the Institute of Integrated Health and Innovation, said this is partially because they have been forced to search for a new driver.

Blissmer was initially hoping that the Rhode Island Department of Health would be able to find a new driver with both a CDL and a medical background, which would be cost-effective because the driver could occupy multiple roles.

“It’s just less realistic to have that happen,” he said. “You can’t count on that as a combination of skills.”

According to Patrick Luce, communications coordinator for URI’s academic health collaborative, the unit first launched on Nov. 28, 2018. The vehicle was part of a partnership with the Rhode Island Executive Office of Health and Human Services and the Ryan White Program, which is a program that provides resources for individuals living with HIV.

However, a setback occurred over the summer when funding for the Ryan White Program was completely cut by the state. Blissmer said that this caused URI to have to search for a new funding partner, which took approximately a month.

The unit is now run in partnership with Codac Behavioral Healthcare, which is a program more focused on the state’s opioid epidemic.

“It wasn’t able to go out for very long on the HIV mission and then we kind of pivoted and transitioned over a couple-month period to switch to the state opioid response,” Blissmer explained.

Although the health conditions the Rhode to Health Mobile Unit addresses changed, Luce said that the unit remains a valuable resource in communities. Luce said that there has been a special focus on going into Rhode Island’s rural communities, such as Richmond and Hopkinton, because it takes longer to get to a clinic, doctor’s office or hospital from these locations.

Luce also said that the first responders in these communities have been “thrilled” to have the unit around.

“I know it’s been very popular in the towns that it goes into,” Luce said. “The police departments that [we] have partnered with it have jumped at the opportunity.”

Blissmer does not believe that the switch to a different funding source has made a negative impact on the effectiveness of the unit in other communities. He said that some of URI’s health students are currently being trained to be able to work in the unit.

“Hopefully, next semester, we’ve got a group of trained students that are ready to go and they’ve built up enough of a schedule and rotation that we can work this into their internship opportunities,” Blissmer said.