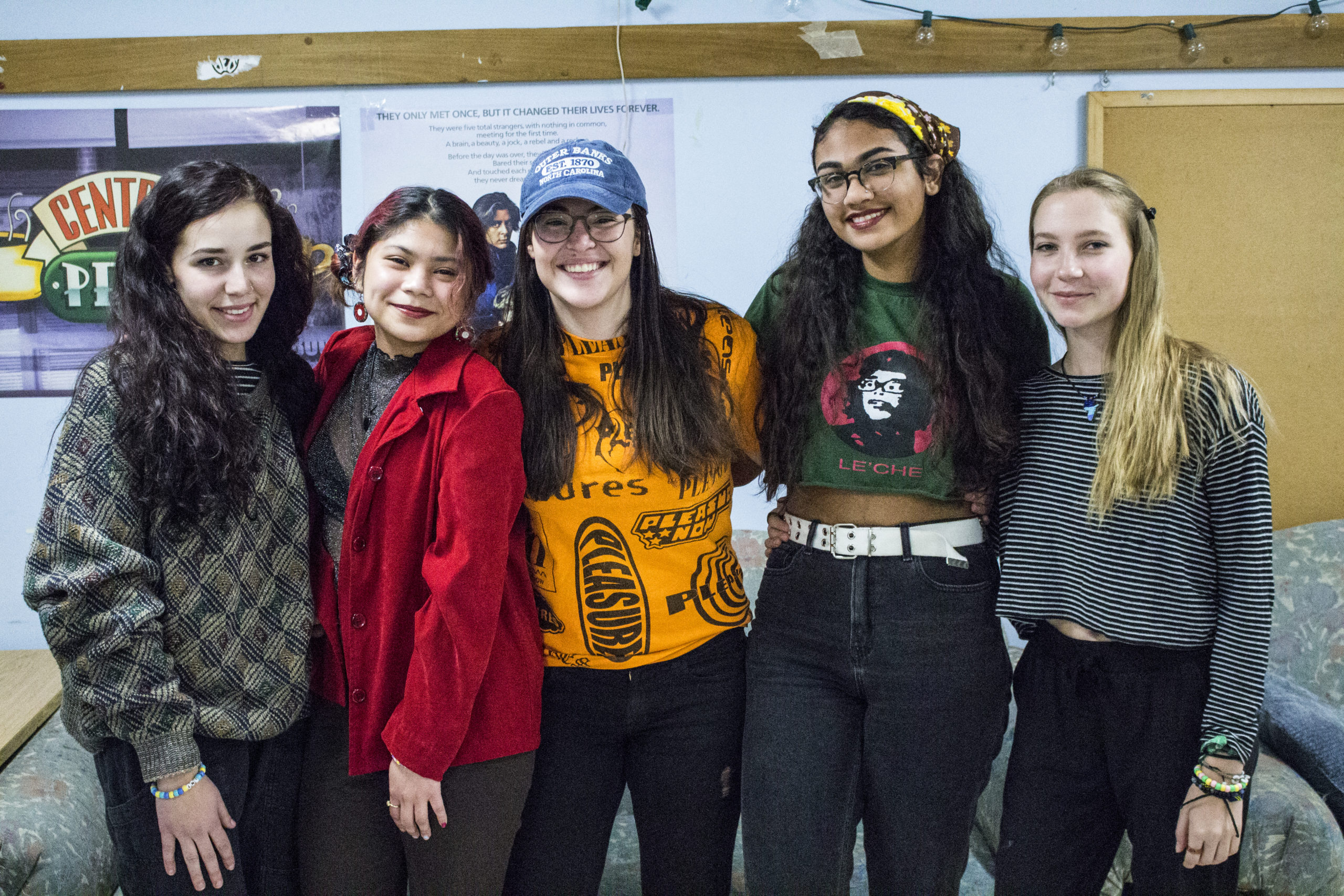 The lights dim, a colored spotlight shines, the amplifiers spark and the symbols crash as you are brought into the beat. The guitar strings reverberate through the room. A new sound, a new vibe, a fresh new band coming into light. Who are they?

Less than a year ago Lili Klayman, River Cabot-Dobson, Gwen Babalato, Karla Gonzalez and Kenzie Walters met through friends and discovered their love for playing music. What started out as casual jam sessions soon turned into URI’s next hit band.

“We were just like ‘We want an all-girl band right now!’” said Babalato, a singer and guitarist for the band.

Late Night Trip is not just bringing a new wave of music but they are bringing about change for women in the music world one chord at a time. The band empowers female musicians, and its members believe this differentiates them from other local musicians.

“I think what makes us unique is that we are all girls,” Babalato said. “There are many local bands out there with female vocalists but I feel like you don’t really see a band with all girls anywhere else.”

According to Klayman, the band’s drummer, Late Night has seen this gender inequality while performing.

“The music scene is very male dominated,” Klayman said. “Even many of the clubs we play at, we are the only girls, we’re like five girls to 20 dudes.”

Late Night Trip has been together for 10 months, but their first performance was on Dec. 3, 2019 in the 193 coffee house. The band was nervous to play, but they performed with another band, Calypso, to complete success. The band has since performed four more shows at local Rhode Island spots including the Jefferson Bear Cottage in Narragansett and the News Cafe in Pawtucket.

“It was great,” Cabot-Dobson, the band’s keyboard player, said of their debut.  “It was a good crowd. Everyone was really supportive,”

While Late Night Trip started out by performing song covers, they eventually found their way into the songwriting world, producing their own original pieces.

“Gwen [Balbalato] will like to bring in lyrics or a guitar riff or something and will just be like ‘I really want to try this out’ or ‘I have these lyrics I really like’ and then we all just figure the song out together,” Klayman said.

The band’s original music is also some of their favorite songs to play.

“My favorite song that I’m really passionate about, that Gwen wrote, it’s called ‘Home Furnishings,’” Gonzalez said “It really sums us up as a band, because it’s really emotional and talks about being in a place that you don’t really want to be in, in life and emotionally, but it’s just so powerful and goes hard and we all play special parts in it that really mean a lot to us.”

Late Night Trip is currently recording an extended play of their song ‘Home Furnishings’ and is in a work-in progress recording with Calypso.

Unlike other bands on campus, none of the band’s members are Late Night Trip music majors. The band’s majors include criminal justice, education, nutrition and wildlife conservation bio. Many of the band members have never even really had any band experience before Late Night Trip, but one member lost touch with her inner rocker but found her way back to it in college.

“I was in a little band in middle school,” Klayman said. “It was really cool but I actually stopped playing music all together in high school mostly because I didn’t want to be solely known as the girl who plays drums and have that be my identity, because I felt like it would’ve been a bit obscure. So I stopped but when I came here [URI] I realized how much I missed it and loved it. The support everyone gives me is crazy and being a female drummer is really cool!”

The band practices three times a week, but at the end of the day, these girls just want to have fun.

“I think for us what it boils down to is friends having a good time, that’s how we started,” Gonzalez said.

Late Night Trip’s next performance will be at open mic night held by the musicians guild on Friday, Feb. 7 at 7:30 p.m.