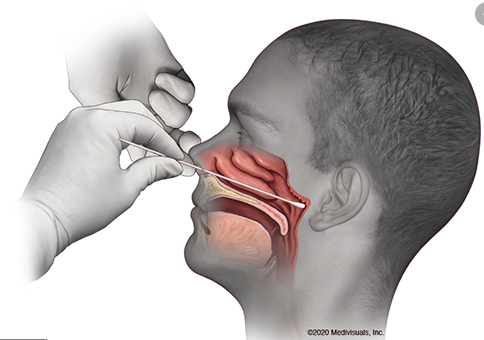 On Wednesday, April 1, I was tested for COVID-19 at a drive-thru test site set up in a parking lot at Rhode Island College. This came after a few weeks of feeling sick with no improvements, despite being treated with two rounds of antibiotics, two steroid inhalers and lots of allergy medicine.

I’m still feeling ill, but knowing that it’s not COVID-19 has helped put me at ease. I want to share what my testing experience was like for those who are about to get tested, or for those who are just curious.

For me, the idea of getting tested was scary, but also relieving. In order to get a test at the time I got one, you had to show symptoms and be referred to by a doctor. Knowing that your doctor thinks there’s a good chance that you have COVID-19 is certainly anxiety-provoking, but at the same time, knowing that I would definitively find out if I had it helped calm my many fears about the situation.

I saw my doctor on Tuesday, March 31, first through a telehealth visit and then outside her office in my mom’s car where she examined me through the open window. I have asthma and wicked allergies, so I usually feel off at this time of the year, but what I felt wasn’t that. Between that and the symptoms I had, she recommended a test. She referred me for testing and we were set for the appointment the next afternoon.

By the time my doctor referred me to get tested, I’d been in self-isolation in my room for six days, since the previous Wednesday when I saw my doctor and tested negative for the flu. I had no fever and only a mild sore throat that came and went, but was having body aches, a bad cough and shortness of breath. Since having come home from school on March 13, I’d only left my house to go to the doctor and get a prescription, donned in a mask and gloves each time. I had taken every precaution, and still got sick, even though it wasn’t COVID-19.

The LED sign at the entrance to Rhode Island College, which I assume normally has information about events and the like, instead said “COVID-19 TESTING BY APPOINTMENT ONLY.” Through the campus, there were road signs directing you towards the site. The campus was deserted except for a RIPTA bus and other cars with people getting tested. There weren’t a ton of cars there, maybe between 10 and 20.

We drove up to the parking lot where the testing site was set up and were met by three National Guard service members in N95 masks. I held my paperwork up to the window and they waved us forward to one of the tents where cars were checked in before proceeding to the testing tent.

In the first tent, another service member, also in a mask, came up to the passenger window where I was sitting and asked to see my ID card in order to confirm my identity with my appointment. They wrote my information on a test tube. The tube was put into a biohazard bag stuck under the windshield wiper with a swab and papers confirming my identity and appointment, and we were then directed to the line of cars for the testing tent.

There were other servicemembers on either side of the line, talking amongst themselves and keeping an eye on things. The service member who directed our car into the line looked to be about my age.

Peering into the testing tent from behind the four or so cars in front of us, we could see two people in full personal protective equipment, which was both comforting and unsettling at the same time. Comforting because the people in the suits and the people being tested were being kept safe, and because it meant that there was access to it, but unsettling because you couldn’t really see any part of the face of the person testing you. They were donned in Tyvek suits (complete with hoods), face masks, respirators, face shields, three pairs of gloves and protective booties over their shoes. The man testing me also had sunglasses on under the shield, and I saw another with sunglasses, too.

We drove into the tent and, after changing the outermost pair of his gloves, the serviceman doing my test came up to my window, rolled down now for the first time during this process, and asked me how I was doing.

“Honestly, I’ve been better,” I said.

He paused for a moment, and then said, “you know what, me too.”

I went to take off my mask with my gloved hands and he recommended that I leave the mask covering my mouth, as the swab was likely to make me cough, about which he was absolutely right.

You know how they swab you for the flu by sticking the swab in your nose? Picture that swab, but it’s about 4-5 inches long, and practically the whole thing gets shoved in there. I swear his hand was maybe an inch from my face when it was all the way in.

And holy cow, to say the test was unpleasant would be an understatement. I felt it in my throat, my eye was tearing up and I couldn’t stop coughing for a good few minutes.

In an opinion piece for POLITICO about his experience getting tested, Andy Carvin, who works for The Atlantic Council’s Digital Forensic Research Lab, described it as feeling like he “had just snorted wasabi,” which is right on the nose (pun intended). My test was quick, though, and once it was out, the service member said to have a nice day and that it was all set. We thanked him profusely and left the tent, directed out of the lot by another service member. I could still feel the swab in my nose on the drive home, for a few hours afterward and even the next day.

My results came back negative the following Monday, April 6. I was terrified the whole time waiting for them to come.  My initial relief at getting a test was quickly replaced with fears that I had it and that I was going to die, a moment of catastrophizing brought on by my lovely companion, anxiety.

The experience of getting tested was weird, uncomfortable and it felt (and looked) kind of apocalyptic. That being said, I am not complaining at all about the situation and my personal experience with getting tested in any way.

Rather, I am sharing my experience with the test and what came after in order to show you what it can look like, and expressing my sincere gratitude to the people who are working tirelessly every single day to keep things running as smoothly and safely as possible. I am beyond grateful to all of the National Guard service members who are putting their lives on the line to test Rhode Islanders; to the medical professionals and support staff, especially janitors, who are doing the same; to the people still working at grocery stores and other employees at essential businesses. I am thankful and am comforted by the response from the state government and health department and by (most) of the community who are following the protective guidelines that have been put into place.

One last thing: If you’ve read this far, thank you. If you get anything out of reading this, let it be this: please, please, please do what you can to keep yourself and other people safe. Practice social distancing, the party can be postponed and game night can wait. If you have to go out, don’t be stupid and don’t berate employees who are doing their best. Do whatever you can to make this easier for all of us and to not make the jobs of the people on the front lines any harder than they already are.