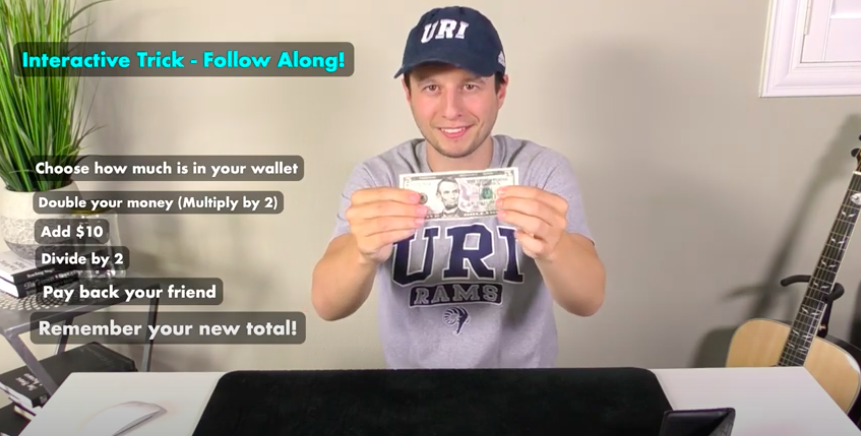 The Student Entertainment Committee organized the “America’s Got Talent” winner’s performance, which occurred on April 23 at 8 p.m.

Since graduating from the University of Rhode Island in 2010 with a bachelor’s degree in marketing, Franco became the first magician to win “American’s Got Talent” in 2014.

Franco began his magic act with a response to one key question that has been asked to him for many years.

“People who watch magic always seem to ask me the same questions,” Franco said. “They say ‘Mat, how do you do that,’ and I have a return question for you and that is: why do you care? I mean that, because all of you know how to watch movies, you lay back and relax and enjoy the movie, but most of you don’t overanalyze the special effects and try to figure out how they are done.”

Franco’s magic show showcased a variety of tricks from changing the size of balls hidden underneath a cup to interactive card tricks that he created while self-quarantining due to the COVID-19 pandemic.

“While in quarantine, I have been working on some crazy sleight-of-hand stuff and I feel a little nervous to attempt doing it online where it will be preserved forever, but nonetheless I’m going to give it a shot,” Franco said.

The magic show was very interactive with plenty of card tricks that the audience was able to copy at home with similar results.

One example of this was a trick in which the audience had to calculate “their next travel destination,” where each possible destination is labeled with a specific number.

“This [trick] has been passed around in the magic community right now,” Franco said. “It’s a really fun and magical thing that you can do with yourself and your friends and it’s very appropriate for the time we are living in right now.”

Finally, each participant added the final two digits of their final numbers together. The number connected to a surprisingly similar answer of the participant’s next travel destination, no matter which number they picked.

Another interactive trick was when Franco created a math question where audience members followed a story of going to a restaurant with a specific amount of money The shock factor of this trick was that no matter how much money each audience member started off with during the scenario, everyone ended up with exactly $5 by the end.

One last aspect of the live stream was a question and answer session, where Franco answered a number of audience questions. During this session, Franco revealed how he was allergic to rabbits and how it felt to win “America’s Got Talent.”

“It was a pretty life changing experience I would say,” Franco said of winning the reality television show. “It was surreal and it is one of those things you can’t put into words.” Said Franco “It felt like a dream that I look back on and seeing clips from that experience or even pictures from that experience is like watching a movie about somebody else.”

The struggle to ‘Feel Good’