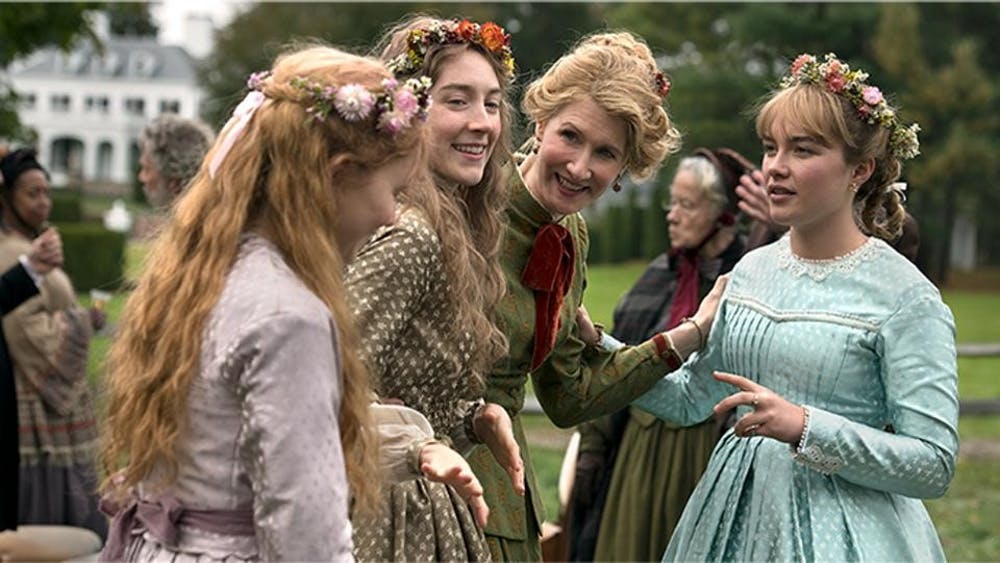 I know you did it. You walked into the movie theater sometime between Christmas Day 2019 and whatever day it was when the world shut down in 2020, and you saw Greta Gerwig’s adaptation of “Little Women,” not because you were dying to see Louisa May Alcott’s classic 1868 semi-autobiographical novel come to life, but because you wanted to see another chemistry-filled on-screen romance between Saoirse Ronan and Timothée Chalamet.

Honestly, I can’t say I blame you. But, as a lover of classic novels, I did not go specifically for the all-star cast, but rather because I wanted to connect with the author. And yes, I did cradle my book in my arms through the entire movie.

I reread the book just before going to see the movie on New Year’s Day to freshen up my memory, and if I were to give the film a rating, it would certainly be four-and-a-half stars out of five. I am no film critic, but from the point of view of an avid reader, I’ll tell you why.

First off: the cast. I know, I know, I just said I didn’t see the movie for the cast, and I do stand by that statement, but I will say the cast exceeded my expectations. I think that the casting directors got some of the best people for the roles of the March sisters (and no, Emma Watson’s accent didn’t sound weird. That’s how people in New England in the 1800s sounded!). From the moment I found out Saoirse Ronan was playing Jo March, I was beyond excited. Same goes for Laura Dern as Marmee. What I was really worried about was Timothée Chalamet playing Laurie.

I know, I know, you’re probably throwing a fit. How dare I shame the gift that is Timothée Chalamet and his half-French, half-American talent and beauty? It’s nothing personal, I swear. Theodore Laurence is one of the most important characters in Little Women because of the impact he has in the lives of all the March sisters. He is the first love of Jo and Amy, he promises to take care of the three younger girls so that Meg feels comfortable with getting married to John Brooke and moving away from home and he comforts the whole family after the passing of Beth. He is caring and lovable, almost like a teddy bear (no pun intended), and I had never seen Timothé

e Chalamet ever play a character who wasn’t totally serious or seriously damaged. I definitely had fears about the charming Laurie being portrayed well, but Timothée Chalamet did not disappoint.

As for the actual meat of the plot of “Little Women,” I think it was done very well. The amount of detail that was shoved into the 135 minutes the film spanned was remarkable considering the book is made up of 47 very long and immensely detailed chapters (seriously, there are no filler chapters in this book).

One of the most important chapters in the book is titled “The Valley of the Shadow.” This is the chapter in which Beth, the second youngest March sister, dies of scarlet fever. The chapter is one of the most well-known in the book as it causes such a rift in the lives of the March sisters, especially Jo’s. What is even more influential about this chapter is that Beth is based on Louisa May Alcott’s sister, Lizzie, who also died of scarlet fever. While it is safe to say no one who saw Gerwig’s adaptation knew Louisa May Alcott, it is easy to know after learning about Lizzie Alcott that this must have been one of the most important chapters to the author as well.

The scene is done marvelously in the film, and is skipped between two timelines: one where Jo is 15, and the second, eight years in the future, when she is 23. There are parallels within the novel that explain Beth’s first battle with scarlet fever, which she survives, and her second, which she does not, that Gerwig captures perfectly. In the movie scene, when Jo is 15, she wakes up and instantly worries when she realizes that Beth’s bed is empty in the morning. She comes down to the table to find Marmee and Beth sitting together, and Beth has just gotten over her sickness. In the second timeline, once again Jo wakes up to find Beth’s bed empty, but when she goes down to the table Marmee is sitting alone and crying. This scene really showed the loss that Beth’s death left in the March family that is repeatedly spoken about in the book, as Alcott made it a point to let the reader know that Beth was always seen as the best member of the March family and the glue that held them all together.

Another scene that was done beautifully was the scene adapted after the chapter “Heartbreak.” This is the chapter where Laurie proposes to Jo (and spoiler alert: she turns him down) on the hill. Timothée Chalamet did a great job conveying Laurie’s heartbreak, and for Saoirse Ronan, Jo’s worries.

This scene was one of the best in my opinion because of how many direct quotes from the book were put into the movie. One of which being Jo’s quote where she says, “I’m homely and awkward and odd and old, and you’d be ashamed of me, and we should quarrel- we can’t help it even now, you see- and I shouldn’t like elegant society and you would, and you’d hate my scribbling, and I couldn’t go on without it, and we should be unhappy, and wish we hadn’t done it, and everything would be horrid!”

Saoirse Ronan says this line almost completely word for word as it is in the book, only leaving out a few words to convey the frantic thoughts Jo was having in order to convince Laurie that what they were doing was right. This word-for-word quoting almost never happens in movie adaptations of books so I was pleasantly surprised that I could say it along with the character.

And another important aspect: Amy! People tend to have this assumption that Amy is a brat who only cares about her beauty, and this is sort of true in the first timeline, but that’s because she is 12 (she burned one manuscript, okay? You weren’t a walk in the park either when you were 12!). In the second timeline, however, she is 20. She is grown up and sophisticated and understands the importance of her family and her art and she is (and I can’t stress this enough) extremely hard working! She is dedicated to her passion and she works hard to help Laurie be happy again after Jo turns down his proposal. Florence Pugh was perfectly cast and showed how much Amy grew into a smart and important character in the second half of the story.

The biggest negative about the movie was that there was no clear indication between the two timelines when they would jump back and forth. I went to go see the movie with some of my friends who never read the book or saw any other adaptations, so they were confused until I explained to them the time difference.

Overall, if you’re looking for a way to learn the story of the classic tale “Little Women” but you only have one day, I’d say this movie is a pretty good go-to.