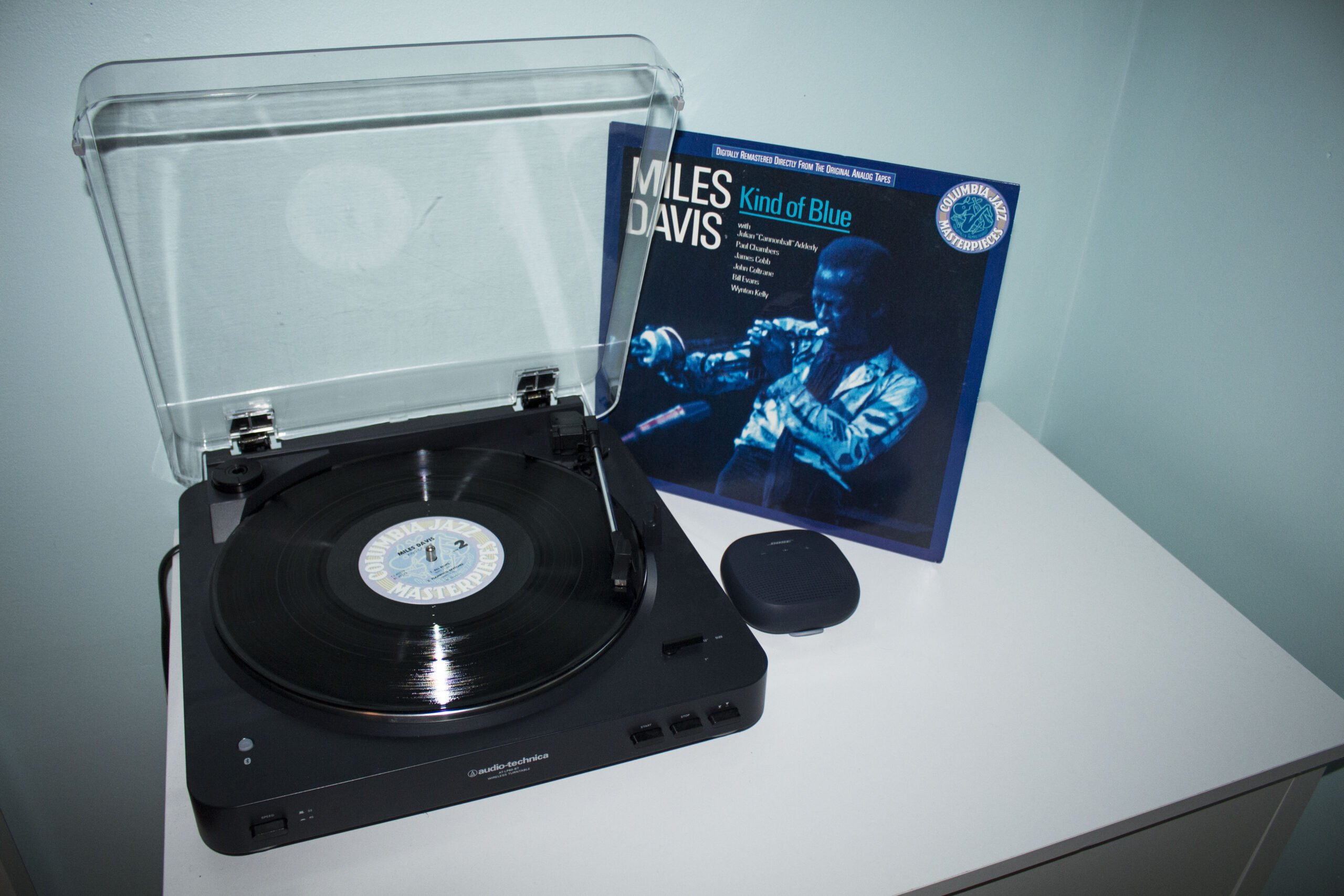 Today, listening to vinyl is making a comeback. Photo by James McIntosh.

While the music industry is currently being dominated by streaming platforms like Spotify, Apple Music and YouTube Music, physical album releases like vinyl and cassette tapes have made a significant resurgence among many music fans.

Once a staple of hipster culture, music fans are now flocking to their record stores, bookstores and thrift shops to get their hands on the latest vinyl pressing by their favorite artists. According to Nielsen music ratings, vinyl sales have gone up by 14.5 percent in the last year, marking 14 consecutive years of growth.

Senior Harrison Dolan began collecting vinyl records his freshman year with money he made from a summer job. Since then, his collection has grown to hold around 300 vinyls with highlights including Nirvana’s “Nevermind” and a red Ella Fitzgerald and Count Bassie record.

As a music major, Dolan notices a distinct difference in audio quality between physical and digital releases, which can often add to a record’s charm.

“When you have vinyl, you’re always going to hear the crackles from the record,” Dolan said. “Music needs to be mastered differently for vinyl. It’s always just a different sound than a digital release.”

Although not as popular, cassette tapes have also made a significant resurgence, particularly among fans of classic or indie music. Senior Neal Glennon began collecting cassette tapes after his car broke down last year and his new car had a cassette player. While cassette tapes can be hard to find in most mainstream music retailers, Glennon got his collection started with a little help from his family.

“My aunt sent me a lot of cassettes when my uncle passed away because they were my uncle’s,” Glennon said. “So I got a cool cassette case and some nice cassettes from her, so that helped spur my interest to keep collecting them.”

A major appeal of physical album collection is artist support. In the age of streaming, artists may be underpaid per stream of their music, so buying vinyls and cassettes have made it much easier for listeners to support their favorite artists directly.

This direct support of the artist often draws listeners closer to the artist, and artists can even include information in a record’s cover flaps that helps listeners learn more about them.

“It’s a different way to connect from an artist to their audience,” Dolan said. “The resurgence of it has totally changed the way that artists need to think about releasing the music.”

In addition to the number of mainstream retailers selling physical albums, a number of websites have emerged that have helped build communities around record collecting. BandCamp is a website that allows artists to sell music and merchandise to their audience with proceeds going directly to the artist. Another website is Discogs, an online music marketplace where people can buy and sell rare or underground music from around the world. Glennon finds a lot of music on the site that he couldn’t otherwise find with cassettes.

While both are avid fans of physical music, they understand the downsides of maintaining a collection. It is a very expensive hobby, and many vinyl records will often come with scratches or cracks, causing the music to skip when played.

“I understand why we’ve generally moved past it as a form of music consumption,” Dolan said.

Glennon agreed with this sentiment, citing the convenience of streaming providing an unlimited amount of music in one place. He also cited the relative obscurity of cassettes as a downside of maintaining a collection.

“I’m still mad when I search for an artist on Discogs and there are only CDs and vinyls available,” Glennon said. “I wish more bands would put out cassettes, even though they’re still kind of niche.”

Regardless, the sudden surge of vinyl and cassette sales marks a new moment in the history of music where musicians can begin taking more ownership of their art. So, go through the stack of old records that may be collecting dust in your parent’s attic — you never know what gems you may find.