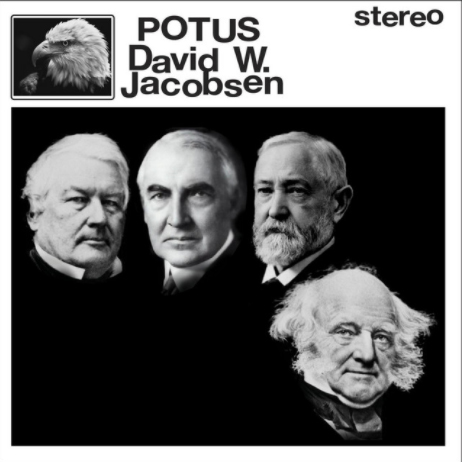 While this most recent presidential administration saw an abundance of great politically-inspired music, one musician drew his inspiration from presidents of the past.

“POTUS,” the latest album by New York-based singer-songwriter David W. Jacobsen, is a playful look into the lives of history’s lesser-known, or lesser-beloved, presidents.

Many of the songs are sung from the first-person perspective of former presidents like John Adams, William Taft, Herbert Hoover and Richard Nixon.

“It’s not necessarily to glorify them, but they were real human beings who shaped the country for better or worse,” said Jacobsen. “It’s more of the humanized slice-of-life moments of these figures from history.”

Jacobsen began writing songs for the album in 2015, starting with a song about Rutherford B. Hayes to the tune of Jimi Hendrix’s “Purple Haze,” after realizing there were a lot of gaps in his knowledge about American history. In his spare time, he would listen to American history podcasts and read books about former presidents, which largely inspired his songwriting.

Still, he hadn’t expected to write a whole album about them.

“Little by little, I started writing more and getting more disciplined about it,” Jacobsen said. “I think [for] about half of them, I read a book before writing a song about the more obscure ones.”

The album uses a number of different styles and influences to fit the narrative of each song and president. The opening track, “1799,” is a folksy reinterpretation of Prince’s “1999” about John Adams and the Federalist Party. “Nothing Left To Do” is a bluesy drinking song about the notably alcoholic president Franklin Pierce. The album even ends with a disco-era nod to Gerald Ford on “The Unforgiven.”

“If you’re gonna do a seventies disco song, I figured it’s gotta be for Gerald Ford,” said Jacobsen. “It just seemed so ridiculous that it was something I definitely felt like doing.”

During the writing and research process, Jacobsen noted many similarities between Donald Trump and presidents like Chester A. Arthur and Herbert Hoover.

“The interesting thing about [Arthur] is he was a fat, corrupt, totally unqualified New Yorker who, when he took off, everybody assumed the worst in him,” said Jacobsen. “With Hoover, here’s another New Yorker who’s never held any other elected office before becoming president, and under him the economy basically imploded, so there’s another call out.”

Jacobsen hopes that audiences will find the balance between the album’s humor and its more sincere expressions of these infamous presidents and see that it doesn’t require knowledge about them to enjoy the songs.

Overall, “POTUS” is a very enjoyable concept album that breathes new life into these often untold stories. It has the comforting folksy charm of a classic James Taylor record, the conceptuality of The Mountain Goat and the wit and genre diversity of They Might Be Giants. This album is available for listening on Youtube, Spotify and Apple Music.