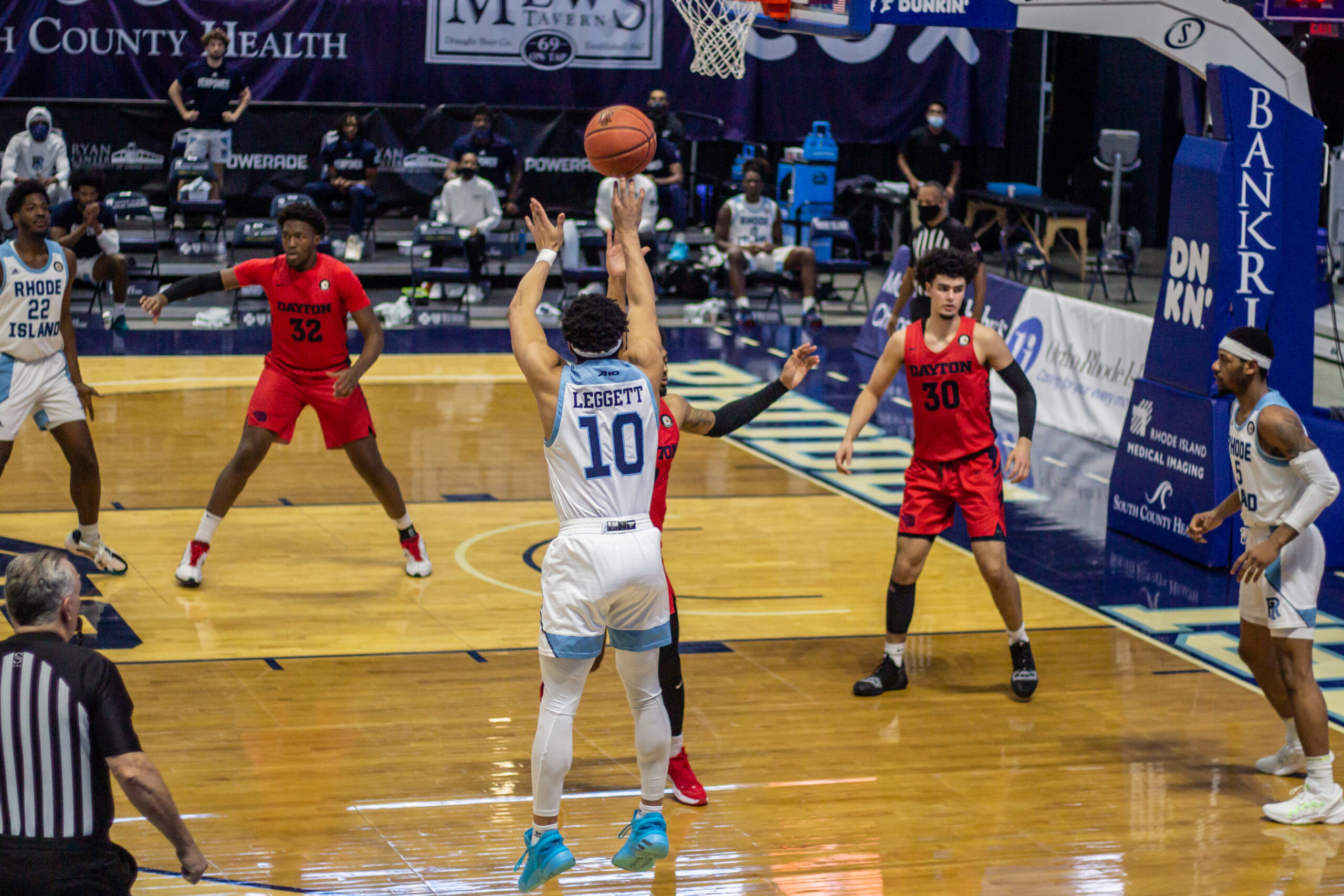 In his last home game at URI, Fatts Russell led the Rams to a close 91-89 victory against Dayton. Photos by Greg Clark.

Nearly a year ago, the Rams were embarrassed at home on Senior Night against the No. 3 Dayton Flyers. Tuesday night provided the Rams the opportunity to send this year’s senior class off on the right note against the very team that had embarrassed them a year prior.

And they did just that.

The Rhode Island Men’s Basketball team snapped their four-game losing streak in dramatic fashion after completing an 18-point second-half comeback to defeat the Dayton Flyers at home 91-89 in a back-and-forth double-overtime affair.

“Great win tonight,” said Head Coach David Cox.”I thought we represented the program well by showing tenacity. I think we came together tonight especially for our seniors. I think that was evident in the fact that we didn’t give up.”

Down by 18 with 9:44 left in the second half, the Rams mounted an incredible comeback to force overtime. Rhode Island went on a 29-7 run to end regulation, with Fatts Russell clawing his team out of the deficit. He had a chance to win the game, but his deep three pointer with a second left bounced off the rim.

In the first overtime, Dayton would go up 76-72 with 2:54 left in the first overtime, but once again, Rhody marched back to send the game into a second overtime. Both teams had chances to win the game, with Mahkel Mithcell and Malik Martin each going 1-2 from the line in the last minutes of the frame for URI, and Dayton star Jalen Crutcher missing a three pointer as time expired.

It was in the second overtime that the Rams would secure the lead for good after Jeremy Sheppard knocked down a stepback fadeaway jumper with 1:27 remaining. Clutch free-throw shooting from Mitchell, Russell and Antwan Walker gave the Rams just their second victory against Dayton in their last six meetings.

As the buzzer sounded, Russell made his way midcourt and kissed the logo. It was a memorable moment for a platey who has meant so much to the University in the last four years.

“It meant everything,” Russell said on grabbing this victory on his senior night.  “I knew this was the last time I was ever going to be in a competitive game in the Ryan Center with these guys, with Coach Cox coaching and it just meant a lot. We didn’t want to go out with an L, and I really didn’t want to because this program, this school, Coach Cox, everybody means so much to me so I felt I had to give my heart out there and make sure we didn’t go out with the L.”

For the first time this season, Russell and fellow senior Jeremy Sheppard were able to play in front of their families. Russell said postgame that the sight of his family helped him will his team to victory.

“When we were down 18, I looked up to my family and I said ‘I’m not going out like this,’ and they smiled and nodded their heads,” Russell said.

He would go on to finish with a team-high 20 points and etch his name into the history books in the process. With a steal midway through the second half, Russell passed Keith Cothran on the Rhode Island all-time steals list.

Freshman Ishmael Leggett also played phenomenally, finishing with a career-high 18 points on 6-8 shooting from the field and 5-for-7 from beyond the arc. Mitchell and Walker also posted double-doubles.

The Dayton Flyers were led by redshirt freshmen Zimi Nwokeji, who finished with a career-high 29 points and nine rebounds while shooting an efficient 9-for-10 from the field. He was followed by Crutcher, who finished with 22 points.

Now at 10-12 overall and 7-8 in the Atlantic 10, the Rams will have a chance to get back to .500 in conference play on Sunday when they make the trip to the nation’s capital to take on the George Washington Colonials. The Rams were previously scheduled to host George Washington on Jan. 24, but the Colonials went on pause due to a COVID-19 health and safety protocols. It will be the Colonial’s first game since Jan. 17. Tip-off is scheduled for 11:30 a.m.