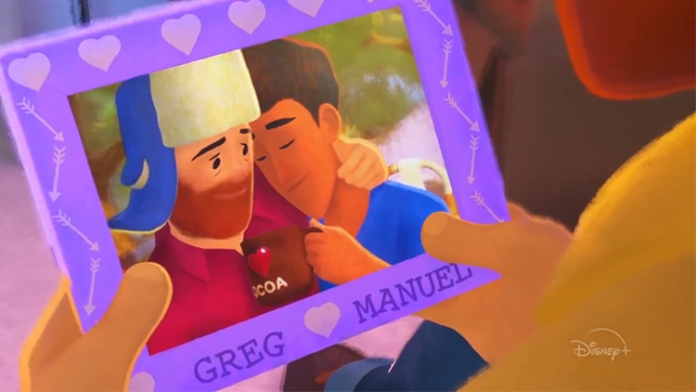 With minimal LGBTQIA+ representation in their films, Disney continues to face backlash this Pride month for only using token queer characters rather than spotlighting the community.

Over the past five years, Disney has incorporated very few queer moments and characters into their feature length films despite a growing global concern for proper representation. Glimpses of a lesbian couple in “Toy Story 4” (2019) and LeFou’s implicit romantic interest toward Gaston in “Beauty and the Beast” (2017) are two examples of Disney’s modest attempts at portraying LGBTQIA+ relationships.

Their farthest progress can be seen in the 2020 Pixar production “Onward,” which includes Disney’s first openly gay movie character. Aside from this, their queer characters are few and far between.

While some new Disney television series have made further steps towards representation, the majority of their movies and shows imply heteronormativity, the belief that heterosexuality is the default, preferred or normal mode of sexual orientation. Fans have accused Disney of “queerbaiting” and only acknowledging LGBTQIA+ characters in an attempt to seem inclusive.

Disney is also notorious for poorly implying characters as gay or queer, yet never introducing them as such. Ryan from the “High School Musical” (2006) franchise was intentionally written as exuberant and feminine, placing him under a gay man’s stereotype and undermining the true diversity of the community, all while never canonically confirming his sexuality.

The lack of proper inclusivity by Disney and Pixar is unwarranted considering the strides being made towards equality worldwide. It sends a message to queer people, especially queer youth, that their identities will always be overshadowed by straight and cisgendered stories instead.

Disney’s missteps have been noticed by the Gay and Lesbian Alliance Against Defamation (GLAAD), who analyzed the quantity and quality of LGBTQIA+ representation throughout seven different motion picture studios. They ranked Disney as failing in these categories.

“It’s not enough to have [queer people] in the background for attention,” she said. “We need to see more gay and trans characters at the center of the story.”

Vancoughan hopes that in the future, members of the LGBTQIA+ community will be advocated for by filmmakers, and that queer characters can be played or voiced by actors who identify as members of the community as well.

Although the instances are scarce, the progress made by Disney should also be underlined so that the studio can continue in an inclusive direction.

The Disney Channel Series “The Owl House” confirms one leading character, Luz, as bisexual, and shows another character having two fathers. Additionally, Disney+ released a short film entitled “Out” which tells the story of a gay man coming out to his parents and even features an on-screen kiss.

These steps are crucial, but Disney must do more for the queer community. Rising senior Lizzie Vanasse is optimistic.

“I expect [Disney] to keep moving in the right direction,” she said. “Our world keeps moving forward, and so should they.”

Fans are eagerly awaiting the premiere of “The Proud Family” reboot, which is said to have a same-sex couple at the center of the plot. As for other future projects, Disney has yet to announce if queer individuals will be significant in their plans for 2021 releases.