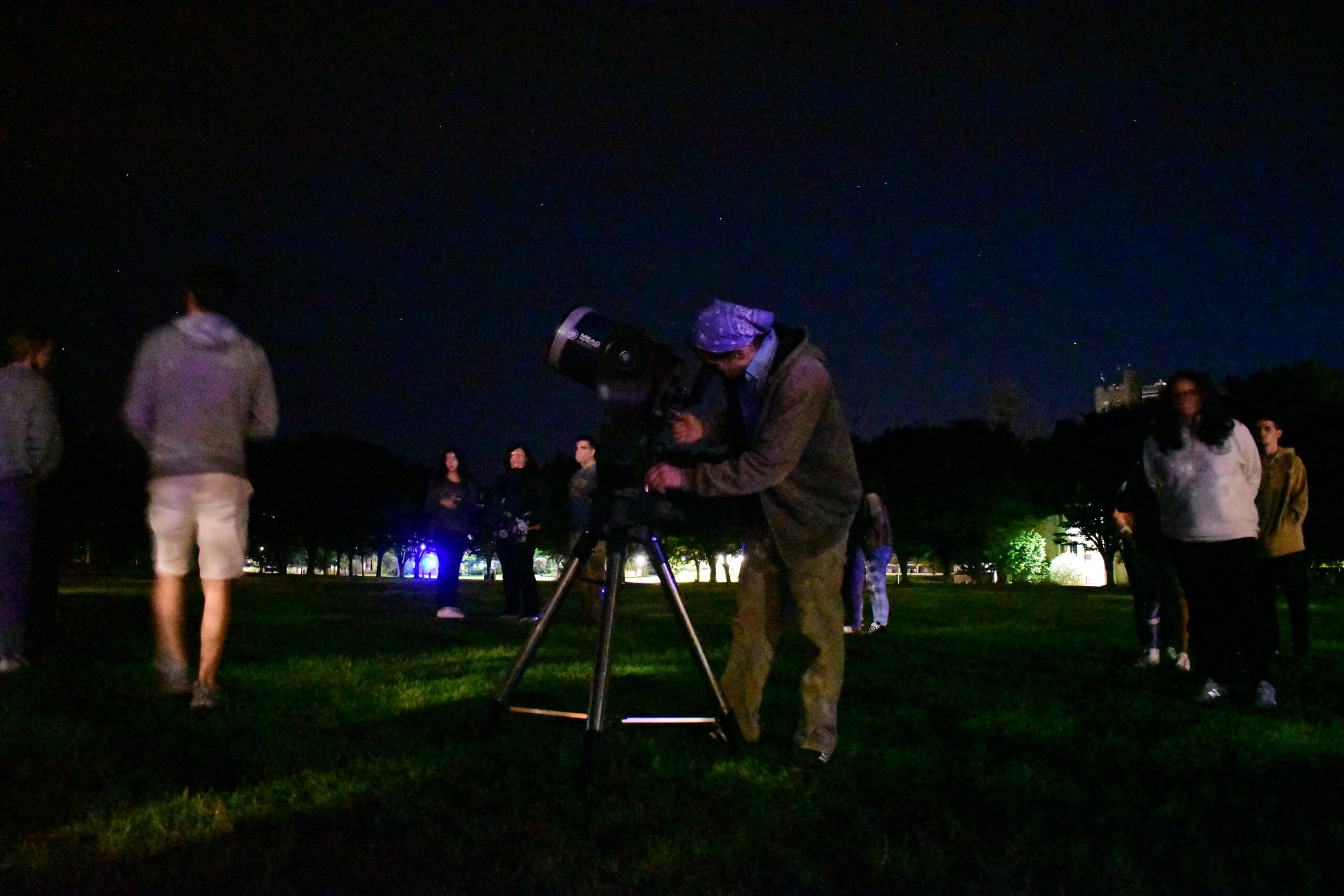 Physics professor and astrophysicist, Douglas Gobeille holds a stargazing event, showing off some of the best our solar system has to offer. PHOTO CREDIT: Bryan Kuklo

The University of Rhode Island may be fully on the Earth, but recently, students and their families got a close view to outer space without leaving the comforts of the Quad.

During the hour-long Astronomy on the Quad event held on both Oct. 1 and Oct. 2, attendees got the opportunity to see Saturn, Jupiter and some of Jupiter’s moons.

Douglas Gobeille, a physics professor and astrophysicist, put on the two-night event, held during the two unusually clear nights during Alumni and Family Weekend.

He said that about 40 people attended the event over the course of the two nights, which was enough for him to be able to help everyone out on his own.

Gobeille explained that Rhode Island is usually not a great place to go for stargazers for a few reasons.

“There are three things we’re looking for in general for astronomy for a good place for seeing,” Gobeille said. “We want to be very high up. Rhody’s flat. We want to be really dry. Rhody’s on the ocean. We want to be super duper far from civilization. We’re in a megalopolis.”

Light pollution proved to be a bit of an issue for the event, as Gobeille had to scrap potential plans to see Vega, Deneb and Altair, three bright stars that form what is known as the “Summer Triangle.”

Another problem that the attendees faced while attempting to view the night sky in Kingston was needing to adjust the telescopes to accommodate for the rotation of the Earth. Gobeille had to do this to keep the planets in focus and in view of the telescope.

“[Due to the rotation], the night sky slowly changes from one day to the next,” Gobeille said. “It looks the same because you’re just doing this little 24-hour rotation, but add those up over time, and you’re looking at a very different position.”

Since the event was held during Alumni and Family Weekend, multiple URI parents attended the event alongside students.

Freshman Brandon Feliz said that seeing Jupiter and Saturn close up was eye-opening to him.

“I realized I never really had an opportunity to see the stars in a real, tactile way,” Feliz said. “So I wanted to come up today to sort of start to see all that surrounds us a bit better.”

Feliz also said that the experience of seeing Jupiter was different than what he expected and gave him a sense of hope.

Rosalinda Hernandez-Barrera, a freshman, said that she was interested in astrology, and wanted to take the opportunity to learn a bit more about and get some personal experience with astronomy.

“I feel really connected to the stars,” Hernandez-Barrera said. “This was a great opportunity to actually see these planets, and it feels really great.”

Gobeille said that he hoped the event would get some more people into astronomy. According to him, there are some exciting events on the horizon when it comes to astronomical studies in this decade.

“I always tell people to try and think back to a decade ago, and what you’ve seen in space and what’s been happening in space,” he said. “We’ve seen some stuff changing, and now this decade ought to be really interesting.”