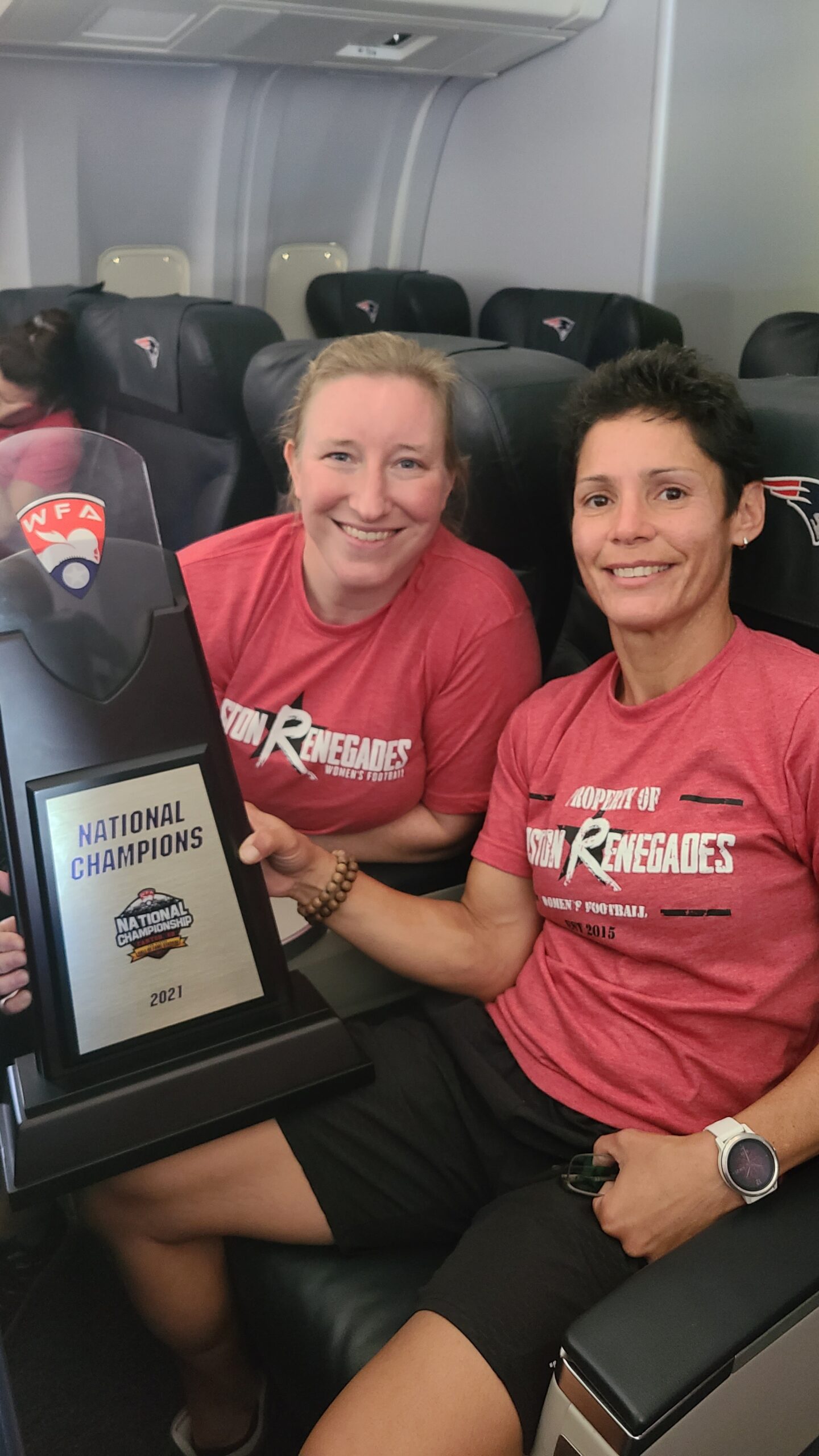 By day, you may see her managing the kinesiology lab inside Independence Square, but at night, she is tackling opponents and roughing up receivers as a linebacker for the three-time defending Women’s Football Alliance (WFA) champion Boston Renegades.

For Lisa Vincent, a lab manager within the department of kinesiology, the game of football has always been something she’s loved. In fact, it began at the age of five when she received a white Patriots football as a gift from her grandfather.

“I literally carried that thing around the backyard for at least two years,” Vincent said. “Throwing it up in the air, catching it, pretending to be a running back and stuff like that. It’s all I wanted to do. It bummed my mother out––she heard ‘it’s a girl,’ and she was expecting dance recitals and gymnastics and she got, ‘I want to play football.’”

Because she was a girl, her only opportunity to play football was during pickup games with the boys in her neighborhood. Growing up, there were very few opportunities to play on teams and some coaches wouldn’t allow girls to try out.

“It was a bummer because I had the talent to play,” Vincent said.

It wasn’t until after graduating college that she officially began her football career in the Rhode Island Women’s Flag Football League in 1996. Twelve years later, she transitioned into tackle football––an idea that was revolutionary to her at the time.

“It was like ‘what are you talking about––this exists?’” Vincent said. “‘How long has this been going on? What do you guys do?’ and they were like ‘you need to come try out,’ and it was love from there.”

Between 2008 and 2014, Vincent found success on the field for both the New England Intensity and the Boston Militia, winning numerous awards including defensive MVP, team MVP and the 2014 national championship with the Boston Militia.

After the 2014 season, Vincent retired from football to focus on finishing her master’s degree and on her job as an adjunct professor and lab manager within the URI Kinesiology department. Yet, she just couldn’t stay away from the game that meant so much to her.

Like many sitting at home at the height of the COVID-19 pandemic last spring and fall, she had time to think about all aspects of her life and there was one thing that she felt was missing––football.

In January, she decided to come out of retirement and rejoin the Boston Militia, who were now the Boston Renegades.

“I went back to [Organized Team Activities] and tryouts and figured out that I could still contribute to the team, and I took it from there,” Vincent said.

The semiweekly, two-hour trips to Boston allowed Vincent to contribute to an undefeated Renegades season that earned her her second WFA title after they beat the Minnesota Vixen in the national championship game.

Winning the national championship or the new piece of jewelry that she’s yet to receive wasn’t the highlight of it all for Vincent. It was the surprise before the big game from another local professional football team with a legacy of winning championships.

Prior to the national championship game at the Pro Football Hall of Fame in Ohio, the Renegades were surprised with the opportunity to fly on the Patriots’ team plane.

“It took a couple of seconds to sink in, and then it was a lot of excitement and the feeling of ‘finally we have the attention of the Patriots’ and how cool is that?” Vincent said. “It was an amazing opportunity, and obviously Mr. [Robert] Kraft’s generosity was fantastic, to get a little glimpse of what the men get as far as their league and their players.”

It is not lost on Vincent that she is a women’s professional football player, and she has a unique opportunity to positively impact the next generation of women playing a sport that, for so long, society has viewed as a “masculine sport.” Vincent experienced this firsthand last summer during a football clinic with her teammates ahead of the national championship game.

“It’s humbling,” she said. “The kids are coming up to you, and they’re asking you to take pictures with you or have your autograph. It’s mind blowing for me because I’m going out there doing what I love, but to inspire someone is really humbling and an awesome experience.”

Vincent and the Renegades return to the field this spring where they’ll look to capture their fourth consecutive WFA title and add onto New England’s “titletown” legacy while inspiring one young person at a time.