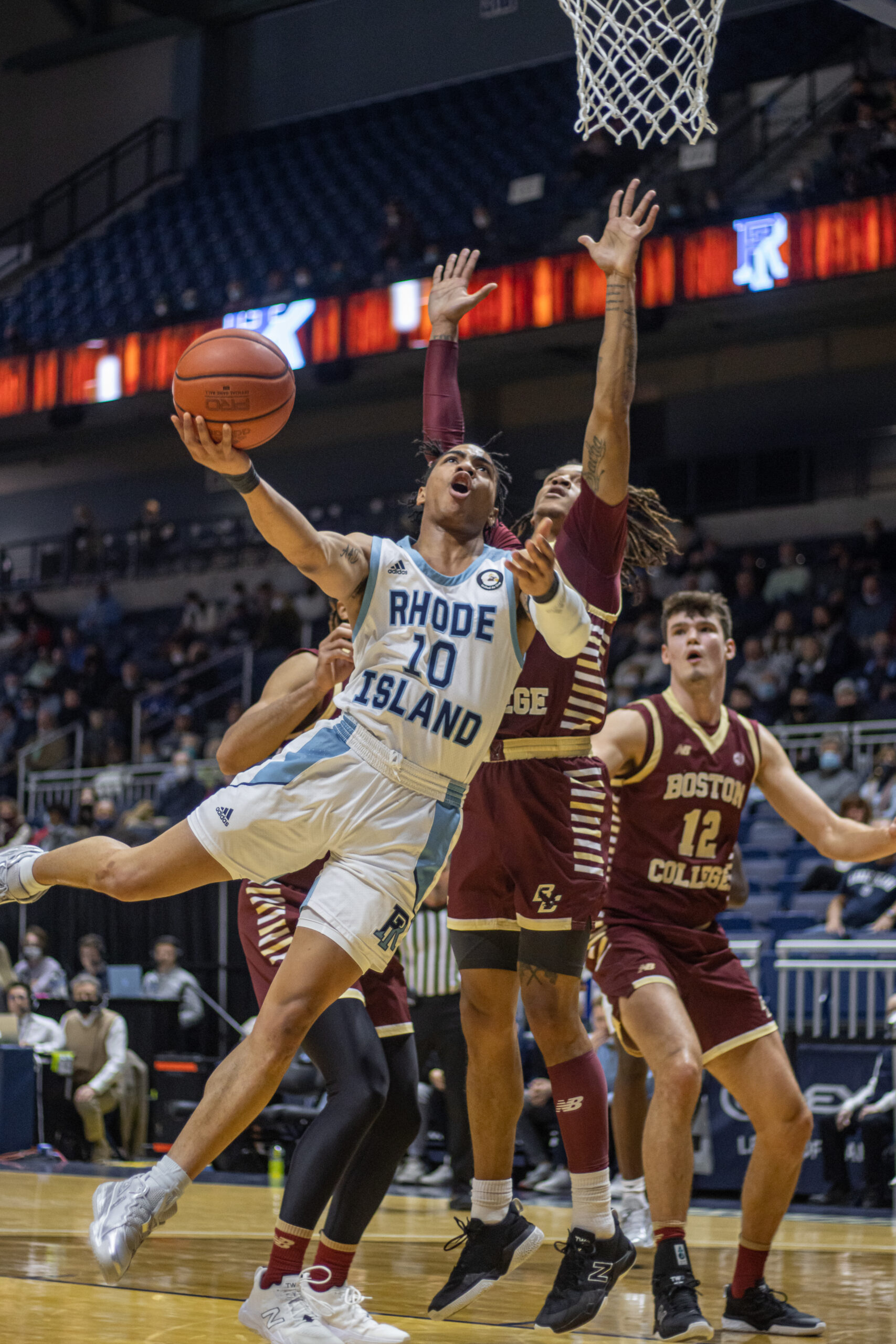 The University of Rhode Island Men’s Basketball team are off to their best start in the David Cox era after moving to 3-0 this past week.

Strong defensive performances allowed the Rams to pull out victories against both Bryant University and Boston College.

It began on Friday when the Rams took on Bryant in the first game of the Sunshine Slam.  Contrary to annual in-state matchups between Providence College and Brown University, it was the first time that these two teams met since 2018, so the game offered some added appeal.

Sophomore center Mahki Mitchell got off to a quick start against the Bulldogs, taking advantage of the gaps in the Bryant 3-2 zone defense to score the team’s first six points.

The Bulldogs eventually caught fire from beyond the arc, knocking down five of their nine first-half three-pointer attempts to take a 17-12 lead midway through the first half. Rhody clawed its way back to retake a 37-34 lead with 45 seconds left in the first half, but a miscue on a dribble handoff allowed guard Adham Eleeda to tie the game at the half.

“The first half, they punched us in the month,” freshman guard Ishmael Leggett said after the game. “The main thing we talked about at halftime was setting the tone. At first, it didn’t go our way. After those first few minutes went by we settled into the game and made the punch we needed.”

That punch came in the form of a floater from guard Sebastian Thomas with 14:31 to play in the game. This play marked the beginning of a 24-4 run from the Rams and a field goal drought from Bryant that essentially took them out of the game. Rhody went on to win this one comfortably, 83-64.

Cox saw this game as a good early season challenge to test the resolve of his team, and he felt they responded well.

“I told them at halftime that [Bryant] was extremely confident and they were going to come out here with a plan to beat us, and it was a good thing,” he said. “We were going to have to respond. It was a good early test, playing against a confident team like that. I thought they trusted each other, particularly on the defensive end.”

On Wednesday, the Rams controlled things from start to finish, using their defense to hold BC to 25 percent shooting in their 57-49 victory.

The anchor of that was sophomore Mahkel Mitchell, who finished the game with eight of the team’s 15 blocks. His eight blocks were tied for the second-most in a game in program history.

“We got an anchor back there,” Cox said, referring to Mitchell. “We might have the best anchor in the country.”

For Mitchell, the performance wasn’t much of a surprise.

“We did a lot of preparation for this game [so] I wasn’t surprised,” Mitchell said. “As a team, we were locked in and I was able to protect the rim the way I’m supposed to.”

Guard Ishmael El-Amin also had a strong performance, finishing with a team-high 12 points. Similar to their game against Boston University last week, El-Amin came through late in the game,  hitting a tough fadeaway three to hold off a late Eagles run.

Rhody returns to the court this weekend when they start a three-game stretch in the state of Florida, beginning with the second game of the Sunshine Slam in Daytona Beach against the University of Tulsa. Tip off is set for 7:30 p.m.