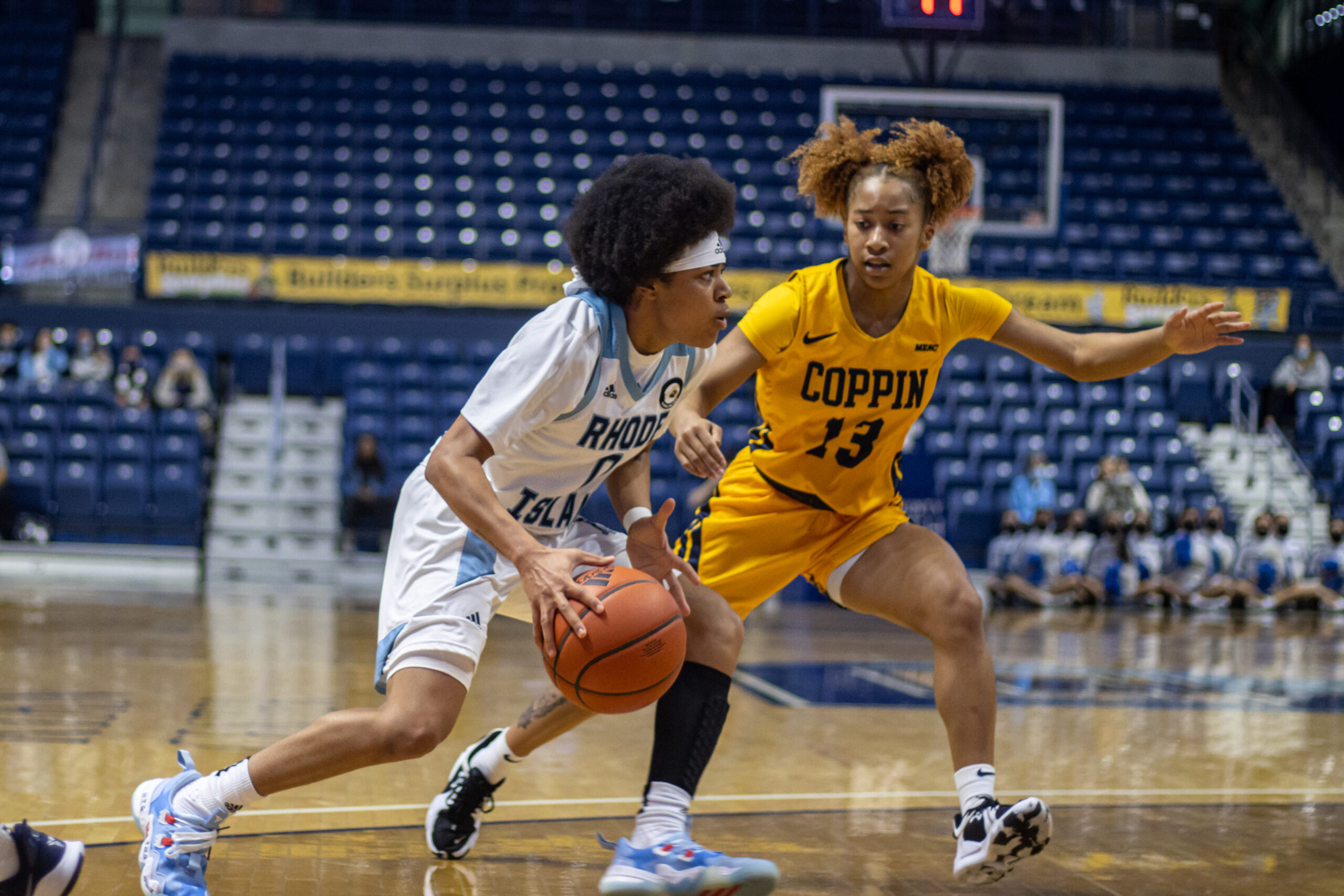 For the first time since the 2002-03 season, the women’s basketball team start the season 4-0. PHOTO CREDIT: Greg Clark

The University of Rhode Island Women’s Basketball team continued its hot start to the season with blowout victories over Merrimack on Friday and Coppin State on Sunday, followed by a 66-53 win over in-state rival Providence on Wednesday.

The Rams started their weekend at the Ryan Center with a tilt against Merrimack; a game that Rhody dominated from the opening tip. The Rams scored the first 14 points of the contest, helping them to build a 29-8 lead over the Warriors going into the second quarter. Sophomore guard Dolly Cairns led the way with seven first-quarter points for Rhody.

The lead only increased from there. A three-point barrage from the Rams ensued and freshman Emmi Rinat and graduate senior Dez Elmore helped push the lead to 60-26 at the end of the half.

Things got worse for the Warriors as Rhody held them to just 16 points in the second half. The final score was 106-42 in favor of the Rams, marking the largest margin of victory in program history.

Five different players reached double figures for the Rams, led by Rinat who had a game-high 17 points — good enough to earn her an Atlantic 10 Rookie of the Week. Redshirt senior Emmanuelle Tahane added 14 points and 13 rebounds to go along with five assists.

In a blowout win, Head Coach Tammi Reiss emphasized the importance of playing unselfish basketball for the full 40 minutes of the game.

“It is easy to get complacent in games like this,” Reiss said. “I was proud of how our players shared the ball and played hard for the entire game.”

Cairns, who finished with 13 points in just 17 minutes, said the team was never focused on the scoreline and despite a Rhody advantage, they were actually disappointed heading into halftime.

“Coach told us to box out at halftime,” Cairns said. “We gave up a lot of offensive boards in the first half so we made a concerted effort to do better in the second half.”

The Rams continued their trend of blowout victories on Sunday when they took on Coppin State in another home matchup. However, this one was a lot closer coming out of the gate.

The Rams only mustered a slight 12-10 advantage after the first quarter as both teams struggled to get their offense going, shooting a combined 8-33 from the field.

However, the Rams got it in the second quarter behind a 17-1 run in the final five minutes of the half. Three-pointers were made during that run by Elmore, Cairns and sophomore forward Mayé Touré. The Rams used this huge offensive explosion to extend their lead to 31-19 heading into the break.

The second half spelled more of the same for the Rams as they hit five of seven threes in the third quarter to double their lead heading into the final quarter of play.

The Rams were able to win the fourth quarter 16-11 and ultimately win the contest by a final score of 74-45. What was a tight affair early resulted in a crushing victory for the Rams that pushed them to 3-0.

Rhody continued their undefeated start to the season when they traveled to in-state nemesis Providence College on Wednesday. They won 66-53 behind a stellar team defensive effort as well as big scoring efforts from Elmore and Cairns.

Cairns finished the night with a game-high 21 points on a staggering 5-8 from downtown. Elmore added 15 of her own to go along with a career-high 17 rebounds. Rhody also got contributions from guard Marta Vargas and forward Marie-Paule Foppossi, who both finished with 11 points. Yet it was the defense that made the difference as they held the Friars to just 2-14 from the three-point line.

The win marks the first time the Rams are 4-0 the 2002-03 season. They will look to continue their streak on Saturday when they return home to take on Princeton with tip-off set for 1 p.m. on ESPN+.