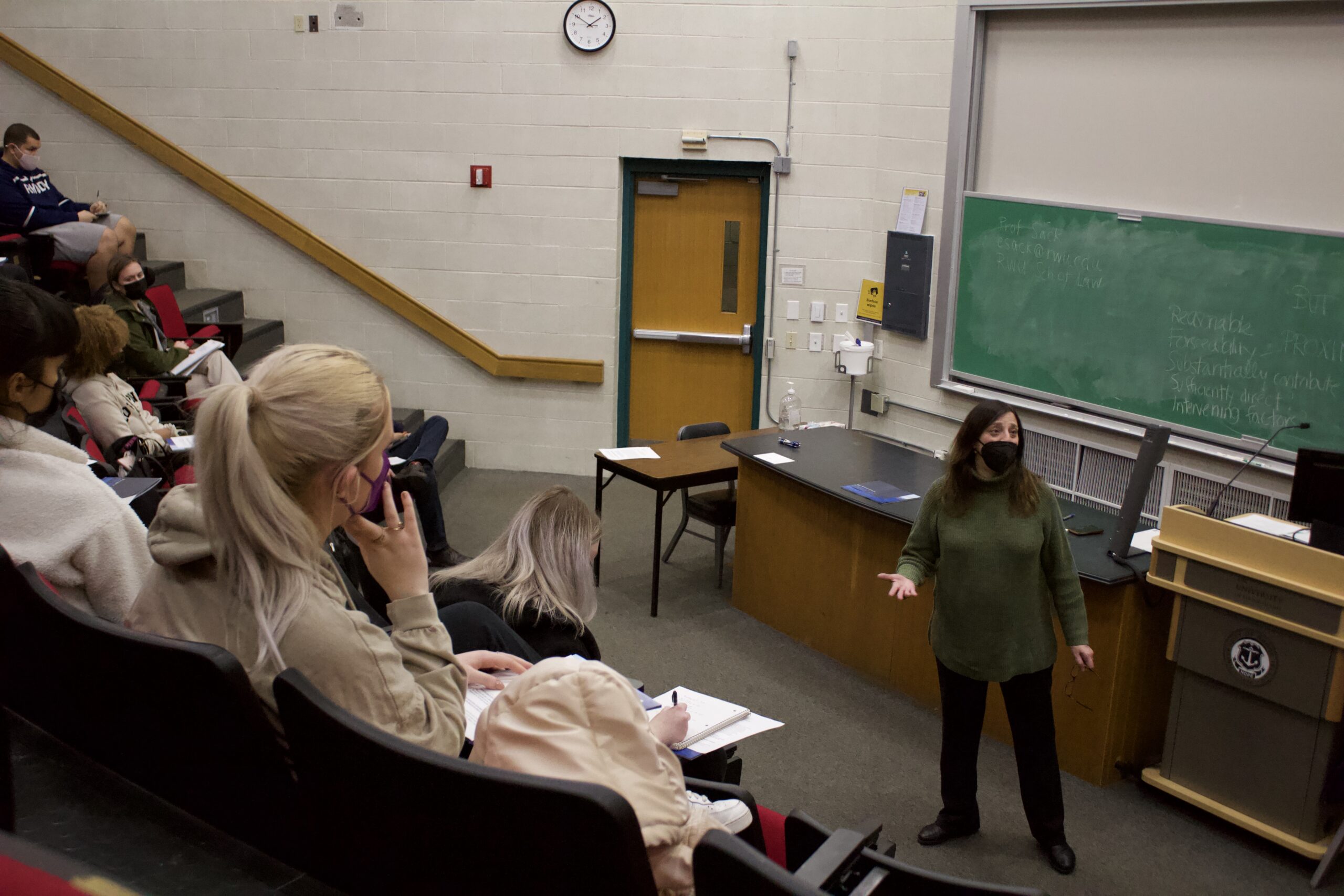 Emily Sack, a professor of law at the Roger Williams University School of Law, led a mock law school class at the University of Rhode Island.

The class took place on Monday at 5 p.m in Cherry Auditorium in the Kirk Applied Engineering Laboratory.

According to Christopher Parker, assistant professor of political science and pre-law advisor at URI, the event gave students an opportunity to get a sense of what a typical law school class is like and to ask Sack any questions about law school.

Sack received her doctorate of law from New York University in 1991 and has been teaching at Roger Williams since 2001. According to her profile on the school’s website, she is a nationally recognized expert on domestic violence and reform of the court system as well as the deputy director for the Center for Court Innovation.

“This is very typical in law school,” Sack said. “You’ll be reading cases that will teach you principles of law and then practice applying them. Then you will be discussing how you think the law should be applied to this set of facts because that’s actually exactly what a lawyer does.”

The first case was that of Inyoung You and her boyfriend Alexander Urtula. You repeatedly sent Urtula messages urging him to end his life and threatened to end hers during their 18-month relationship in 2019. Urtula ended up taking his own life.

Sack asked the class to decide if Inyoung should be charged or not. The class agreed she should. In the real court case, You was charged with involuntary manslaughter and pleaded guilty.

The class learned about terms such as causation, the possible cause of a case, proximate cause, a factor sufficiently related enough to be the cause of the case, and intervening factors, the outlying factors that could have contributed to the cause.

The second case study was the case of Michelle Carter, a minor who convinced her boyfriend Conrad Roy III to take his own life over the phone. The class decided Carter should be charged with involuntary manslaughter, as she also was in real life.

“She’s out now but no one knows where she is,” Sack said. “There’s some thought she might have changed her appearance. There’s a Hulu documentary coming out about it sometime this spring.”

Next, Sack led into the Q&A portion of the event. She talked about Roger Williams School of Law and the experience of law school as a whole. The first year of law school is all core courses in different fields of law, according to her.

She said that Roger Williams University is the only law school in Rhode Island and it has been recognized nationally for its professors, hands-on learning and having the lowest tuition for private law schools in all of New England.

One student asked what the requirements are for law school and what admission boards look for in applicants.

Sack explained that schools look for high Law School Admission Test (LSAT) scores, a good undergraduate GPA, commitment and involvement and some sort of experience or something that shows your interest in law school.

Because law school is a commitment beyond the undergraduate experience, this class was another way the university created a real-world professional environment for students.