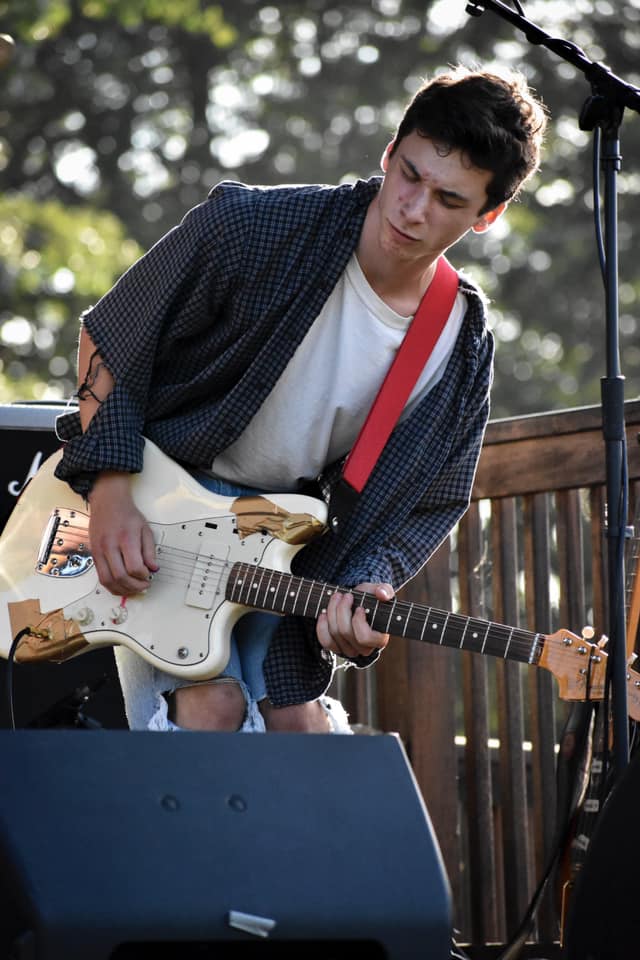 Kyle Gunning, a freshman English major, manages to balance being in a band and running a literary magazine while studying literature. PHOTO CREDIT: Scoop Bandits

For Kyle Gunning, a freshman at The University of Rhode Island, balancing his studies, music and producing a magazine is the norm.

The Massachusetts native is currently a member of Scoop Bandits, an alternative rock band, the producer of Portable Meridien, an online magazine, and Literature major . After attending college, Gunning hopes to one day become a professor of English literature.

Gunning said that his interest in music started at a young age, but he didn’t discover his real passion for it until middle school when he started playing instruments and established Scoop Bandits.

“My dad just is a huge music lover,” Gunning said. “Growing up, I would always be listening to music. And then eventually, I just wanted to do guitar lessons. I also took violin lessons and piano lessons, all throughout middle school and high school.”

Now, over a decade after commencing his musical journey, Gunning has released his first full-length album. “The Finding” by Scoop Bandits features Gunning on lead vocals and guitar.

Gunning said that he and the band hope to put out more music this summer. In the meantime, they will continue to perform at local venues and private parties.

Music has always served as a creative outlet for Gunning, but he said he didn’t realize how deeply important it was to him until he started creating his own music.

“I’m not bound completely by language in my expression of my emotions and in my beliefs,” he said. “I can make somebody feel a certain way by playing music and I can manipulate emotion and manipulate a message. I think that’s something that’s really cool.”

When he is not creating music with Scoop Bandits, Gunning can be found working on his magazine. The main inspiration for Portable Meridiem came from his dream to provide a space for college student writers to have their work published.

“You know, it’s very hard to get your work published with good magazines without having a reasonably respectable resume,” he said.

He said that because of this, he and his friend Evangeline Welch, a student at Bryn Mawr College, decided to create the magazine together.

“We decided- let’s make a magazine of our own where we can publish other people’s work and uplift students,” Gunning said.

According to Welch, she and Gunning took inspiration from feminist zines and the 90s punk aesthetic when laying down the foundations for the magazine.

“​​After a conversation about Kathleen Hanna and riot grrrl zines, [Gunning] reached out and asked if I would be interested in starting a magazine that, similar to these 90s zines we both really liked, confronted modernity in a way that could inspire us and others to reflect about how and why we live the way we do,” she said.

She and Gunning both said that the main objective of the magazine is to inspire others, college-aged students, while also sharing creative perspectives on post-modern society.

“Personally, I like to focus on how we relate to the past. How the past defines us, and what do we do with this information,” Gunning said. “That’s what modernity is. It’s just relations over a long period of time of influence and inspiration.”

Despite their success, Gunning and Welch both said that they have encountered obstacles while navigating the publication of their magazine.

According to Welch, one of the biggest challenges they have faced has paralleled as one of the most exciting aspects of producing the online publication.

“With Kyle at college in Rhode Island and me in Pennsylvania, it can definitely be tricky to produce and work on a project like this across state lines when so much of it is collaborative,” she said. “However, because of this unique aspect, we have so many different perspectives that we have already shared and that we can find to share, which adds a great dimension to the magazine.”

“Before starting Portable Meridiem, I had never edited writing in a professional context,” Gunning said. “For example, the last issue that I did, somebody had given me an essay that they wanted to be published, and I had to sort of transform this essay into an article. I’m learning to be an editor. It’s a learning process.”

In addition, he said that he had to acquire technological skills to create and format the website.

“All of that stuff was really new to me, and I didn’t really know I had the ability to do it,” he said. “I pushed boundaries for myself and I’m going to continue to try and push boundaries as much as possible.”

Portable Meridiem, published bi-monthly, can be accessed online here. Whether it’s in the studio or in the production room, Gunning says he is consistently trying to push boundaries, even in his first year.