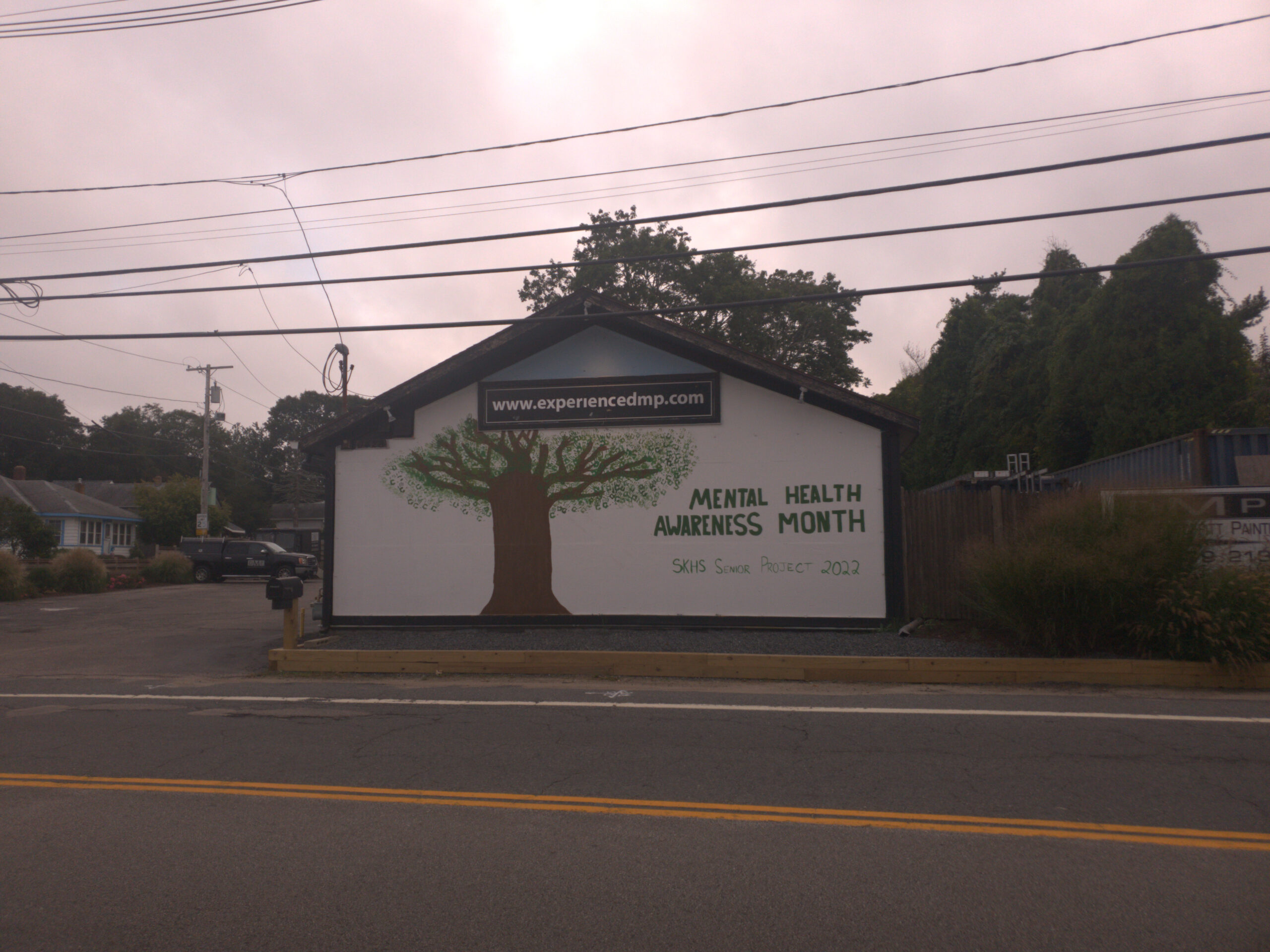 Now that we find ourselves in the wake of the COVID-19 pandemic, our concerns are drawn toward the state of mental health after such radical lifestyle changes.

This idea is becoming increasingly more important, as it begins to fill many aspects of the media, and is not only an awareness that mental health matters, but a space which provides for passion and growth in the subject.

Many who are aware of this will be happy to find that in Wakefield, a local painting company, Dennis Moffitt Painting – in partnership with South Kingstown High School (SKHS), produced a mural in honor and awareness of Mental Health Month.

The mural’s presence is marked and important, as not only is it a highly trafficked area, but any commuter who finds themselves on Kingstown Road in Wakefield will happen upon it. What this means for the greater Southern Rhode Island is a strengthening of community; a community which has been known for its beautiful landscapes, its nuanced interests and now, its support and awareness for one another.

A sophomore at URI, Hannah Faria-Meade, came upon the mural while out shopping for groceries in Wakefield. Faria-Meade commented on the mural that it looked like a “community project,” an image which is not put up to be admired, rather to be utilized.

“The mural brings light to an issue often glossed over,” Faria-Meade said.

The uplifting qualities of such a culturally driven gesture is a positive refreshment for anyone who takes notice similar to Faria-Meade.

The mural itself encompasses the Kingstown Road-facing wall of the business and is large enough to be seen from down the street by motorists or pedestrians. The artist decided to depict a large tree with billowing leaves of painted handprints, overlayed on a white background.

The artistry of the mural is heartwarming and inspiring, with many handprints that make up the tree’s upper half and a wide trunk that supports from below. With the branches of the tree spreading out far to encompass all the handprints, it is clear the artist envisioned an image of strength and togetherness when planning the image. Beside the tree is inscribed in bold green lettering: Mental Health Awareness Month. Below in smaller lettering reads: SKHS Senior Project 2022.

Another URI student, sophomore Eliza Engert, was also fortunate to see the mural in passing.

She said that something unique about this mural is the fact that it is in partnership with SKHS.

“It is nice to see a high school participating in the community and bringing awareness through art,” Engert said. “As someone who struggles with mental health, it is comforting to know that there is local representation, and knowing that people are being educated on the subject, especially in high school, is great.”

Engert is exactly right in her reference to the difficulties that our local high schoolers have to face with their own issues in mental health. Education and awareness on the subject is possibly best concentrated on our youth, a notion which is considerably important when taking note of the artist’s purpose and identity.

If time allows, the mural is worth a visit as it comments greatly and importantly on the kind of community we are trying to build in Southern Rhode Island. Not only is the mural a gift to Wakefield, but it is also a gift to URI students who drive by it on their commute to class every day. There is no doubt that such an important piece of art has, and will continue to, have an effect on the daily lives of locals and students in the area. The mural is a lesson in kindness and community; a lesson which has and will continue to build URI as an institution and a culture.