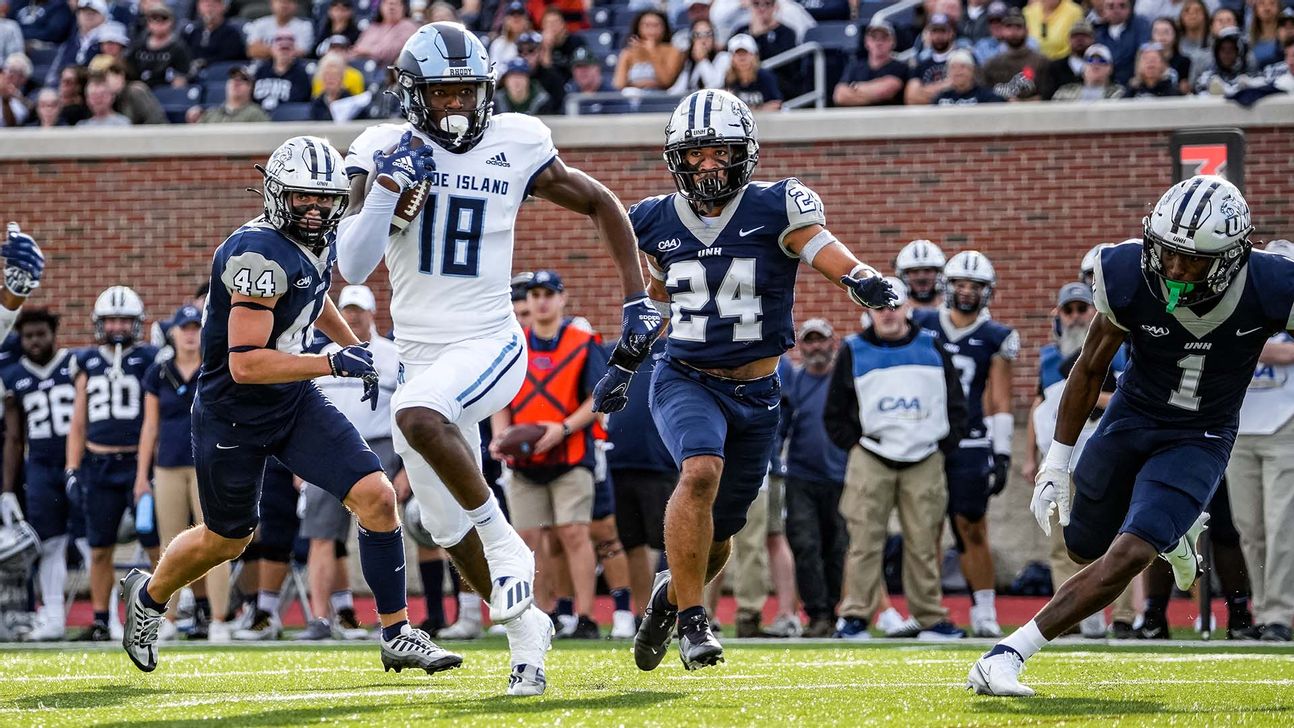 Graduate receiver Kahtero Summers finished with four catches for 64 yards and a touchdown for the Rams. PHOTO CREDIT: gorhody.com

Rhode Island Football’s playoff hopes were left all but extinguished this past weekend, as a 31-28 loss to the University of New Hampshire saw the coveted eight win mark become unattainable for the Rams.

The back-and-forth battle came down to the wire, and concluded with a controversial catch with just 17 seconds left.

A scoreless first quarter left fans in Durham, N.H. wondering if the teams would remain in a defensive deadlock for a majority of the game. However, at the beginning of the second quarter, Kasim Hill took the ball in himself for the score. Rhode Island took the first lead of the game, 7-0.

Later in the second, the Wildcats were forced to settle for a field goal after being shut down in the red zone. Nick Mazzie connected from 30 yards, trimming the URI lead to 7-3.

Rhode Island answered quickly, as a failed onside kick attempt from UNH gave URI excellent field position to start the drive. A 25-yard Ed Lee reception quickly moved the Rams downfield; however, it was a 19-yard Marques DeShields rushing touchdown that served as the exclamation point, extending URI’s advantage to 14-3.

Before the half was up, UNH orchestrated a methodical 10-play drive in under two minutes. A Caleb Burke touchdown reception with very little time left on the clock sent the Rams and Wildcats to the locker room with a 14-10 URI lead.

The opening of the 3rd quarter saw UNH trim the lead even more, as after being stopped just shy of the red zone, UNH settled for three points once again, making the game 14-13 URI.

URI was quick to answer this score with one of their own. A drive featuring catches from Lee and Caleb Warren set up a Kahtero Summers touchdown reception, making it a 21-13 ballgame.

UNH’s offense then proceeded to march down the field on the next drive, headlined by a 15-yard rush from Dylan Laube and a 20-yard reception from Kyle Lepkowski. Laube held the touchdown honors this time out, rushing it in from 4 yards out. Max Brosmer then converted the two-point conversion with a designed run to tie the game at 21.

In the fourth, a 22-yard Mazzie field goal put UNH up 24-21, their first lead of the game. However, URI swifty responded with a 15 yard touchdown pass caught by Ed Lee, putting URI up 28-24.

That set up the dramatic ending. On fourth and nine from the URI 26-yard line, Brosmer dropped back to pass. On a last-ditch effort for the game, he found DJ Linkins in the endzone to take the lead 31-28, winning the game for the Wildcats.

After the game, a photo and video circulated social media of an angle that showed the ball being dropped. However, the call was solidified and the game was over, leaving Rhode Island’s hopes for a playoff bid to diminish to almost nothing.

Post game, URI head coach Jim Fleming was disappointed in the loss, but kept his head held high for his team. Hoping for the best in the last week of the season.

“Obviously a very significant loss for us, and a significant win for New Hampshire,” Fleming said. “What I’m just hopeful for right now is to be able to get back to where we were from and go ahead and get ready to play Albany… and pray and hope that we can present a 5-3 conference record and still have an opportunity to play in the playoffs”, Fleming added.

Meanwhile, on the other side, New Hampshire coach Rick Santos and his squad were fired up, but gave a lot of credit to the Rams.

“A massive win for our program today,” Santos said. “I thought our guys showed tremendous fight, but give credit to Rhode Island. That is a tough and well coached team and we had to earn it today.”

Rhode Island hosts Albany this coming weekend to finish out their regular season schedule. Kickoff is set for Saturday at 1 p.m.

Football falls in heartbreaker to College of William and Mary