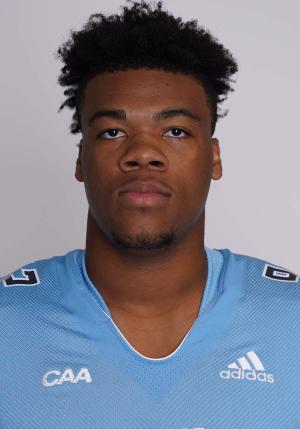 AJ Cornelius profile: Cornelius is a top-five offensive lineman in the FCS, according to Pro Football Focus. PHOTO CREDIT: gorhody.com

The University of Rhode Island football team has undergone a culture change in recent years, winning more games than ever before and staying very competitive with any opponent. A large part of this change has been their staple Right Tackle, Ajani Cornelius.

Cornelius, known by his teammates as AJ, is a sophomore offensive lineman who has made a huge impact on the line of scrimmage for the Rams. His athleticism and large frame, compiled with his determination and dedication to the game has given Cornelius all the opportunities to succeed at the collegiate level, resulting in Cornelius’ breakout 2022 campaign in which he has become a top three graded FCS offensive lineman by Pro Football Focus.

Head Coach Jim Fleming has been astounded with the second-year tackle’s improvement thus far, claiming his physical progress is at a professional level.

“His body is transforming into what can be an NFL type body,” Fleming said.

However, Fleming also sees a change in Cornelius’ demeanor, making him an even more useful asset.

“His intent has always been there but the continual involvement of football, learning the knowledge, and taking coaching,  the skies the limit with what he can do.”

However, Cornelius’ dominance on the field did not start at Rhody. AJ attended Archbishop Stepinac High School in White Plains, NY. At Stepinac, Cornelius was a star, a major contributor in back-to-back State and League Championships in 2018 and 2019. As a Senior, he was named CHSFL Offensive Lineman of the Year.

With consideration from several HBCU schools, Cornelius was originally committed to Howard University, but following a speedbump, the highly touted recruit saw Rhode Island as an excellent fit.

“Coach [Stefon] Wheeler came to my school, we talked, he was feeling me, [Coach Wheeler and Jim Fleming] came and did a home visit… and I fell in love with them instantly”, said Cornelius.

With Cornelius only being a Sophomore, there is plenty of time for him to continue improving his athletic ability. When asked about what he needs to do to improve as a player, Cornelius admitted that the small tweaks make a huge difference.

“Just keep lifting and working on my explosion, I would say”, said Cornelius. “There’s a bunch of different things I could do better, just technically”, Cornelius also added.

Those small tweaks will help to put Cornelius on another level of athletic ability, but his 2022 campaign has been nothing short of spectacular. Rhode Island’s 165 rushing yards per game ranks them fourth in the CAA, and their 22 rushing touchdowns sees them in third. Cornelius, who is a major force in creating holes for the rushers, discussed how important the rushing offense is for a team.

“When the run game is good, we feel like we can do anything”, said Cornelius. “I credit everything to Coach Wheeler coaching in the run game. He drills that every day and he makes sure that we’re doing 100% in the steps of the drills”, he added.

Fleming on the other hand sees Cornelius impacting both the rushing and passing offense, making the lives of position players and coaches a lot easier.

“I think it opens up not only the run game, its steady in both run and pass. He’s very talented and still a very young player so it makes your job a lot easier”, said Fleming.

With all of the tools he needs, and a bright future ahead of him, Cornelius has an opportunity to become a dominant player for Rhode Island and for College Football in general.

Football falls in heartbreaker to College of William and Mary