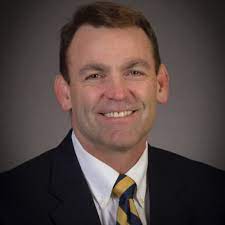 Robert “Bob” Flynn served as a Navy commander for 28 years, and is taking on a new role as the new director of the Military and Veteran Education (MAVE) Center at the University of Rhode Island.

He became the director of the MAVE Center the week of Nov. 14. In addition to this role, Flynn also serves on the board of the Domestic Violence Resource Center alongside Ellen Reynolds, interim vice president of the Division of Student Affairs.

Previously, Flynn lived in New Jersey, and from there, he went to the Newport Naval Academy Preparatory School in Newport, RI, graduating with the class of 1992. He now lives in Narragansett, Rhode Island, with his wife and three children.

“I was a naval flight officer, which means I flew in the copilot or backseat of jet aircraft,” Flynn said. “So I flew up aircraft carriers for a number of years. Deployed overseas four times on aircraft carriers and to Iraq on the ground.”

Before coming to URI, he served in many roles, including as the executive entrepreneur for the Blue Angels, a flight demonstration squadron of the United States Navy. Before he flew with them, he worked for the 34th Infantry Division in Iraq, where he was in charge of counter IED, or improvised explosive device, preventing IEDs from going off.

He mentioned how a large chunk of his life was spent working as a professor at the Naval War College and how working that job helped him get his current job here at URI.

“I love my time at the Naval War College, which was in education,” Flynn said. “I loved the educational environment. I’m from Narragansett, so URI is like my hometown school. We’re all kind of URI fans, no matter what, but when I got out of the military, I realized that I wanted to do something. If I could do something involved with education, that’d be great.”

Rick Rhodes, a close friend of Flynn and professor at URI’s College of the Environment and Life Sciences, said he met Flynn when he was surfing. They almost immediately bonded over their shared love of wing-foiling, a sport similar to windsurfing.

“[Flynn is] one of the most intelligent people that I know. He is also deeply caring. Deeply patriotic, deeply patriotic. And I think that that, you know, that combination of, of values or attributes that drives the man that he is, and I think that you know, that all speaks well. To the job that he’ll do for us here at the University of Rhode Island that’s serving as the primary advocate for veterans that are coming into the institution,” Rhodes said.

Flynn said that during his time as the director of MAVE, he hopes to help the veterans find support and a sense of belonging in the community at URI. He hopes to work towards making URI the best place in the country for veterans to go to school.

“I want the veterans on this campus to be as integrated as any group can be into campus life,” Flynn said. “And that means when we do have future events [or opportunities], to have the URI community participate is the type of thing I’m looking for.”

According to Rhodes, Flynn’s work will greatly benefit the University and the veterans at URI. Rhodes said that a lot of the veterans coming through the portals don’t know how to register for classes or pay their bills. He hopes that Flynn and the MAVE will be able to help them.

“I characterize it as high quality and on time he delivers,” Rhodes said. “I think that that’s going to play really well here at the University. I think that he can help make things that are fundamentally complex, easy to do.”

Flynn wants URI’s veterans to be and feel fully immersed and integrated into the campus community.

“I’m extremely happy to be here,” Flynn said. “I think that the veteran and military-connected population at URI is full of great folks that want to be integrated into the school. So please come by our door is always open at the MAVE center.”

You can find out more about the MAVE by going to their website.