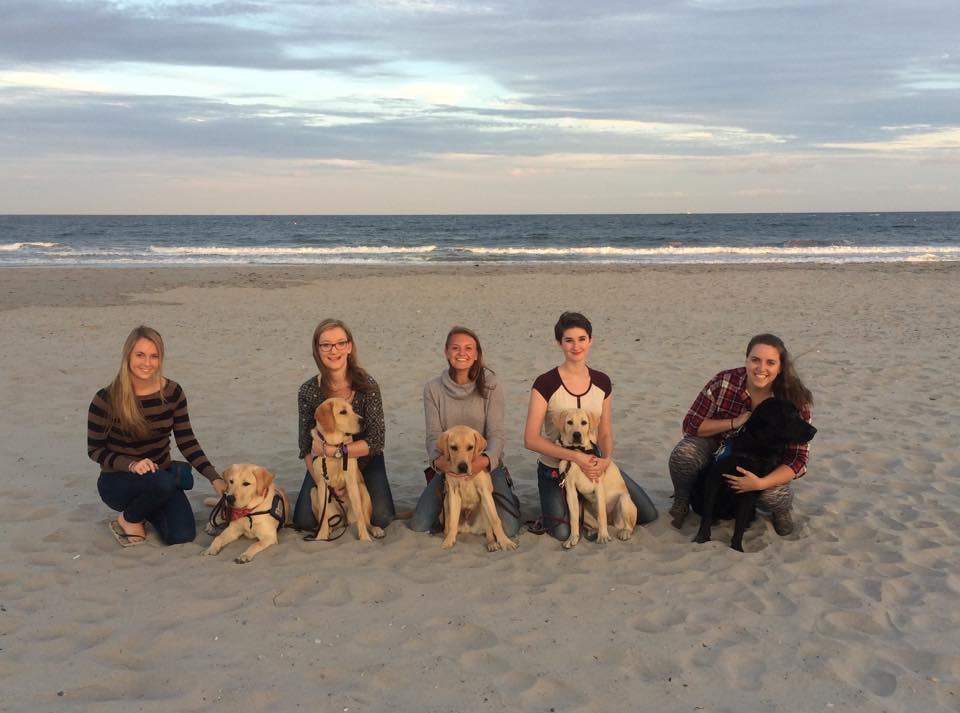 The Puppy Raisers Club, a student organization at the University of Rhode Island, have recently been bringing puppies they trained to campus and into classrooms to expose and socialize puppies to everything and anything.

Since its conception about a year ago, the Puppy Raisers Club has grown tremendously. Finally recognized by Student Senate, the group has almost tripled in size and they now have five puppies whereas they used to raise just one puppy at a time.

“Puppies attract people,”junior Pre-Veterinary major and President of the Puppy Raisers Club Caitlyn Landry said. “People see a puppy and get interested and want to know how they can get involved. We just had our first meeting last Thursday in which we didn’t have standing room in our room in Tyler Hall. We actually had five new people get certified this past weekend; they really jumped right in. So we’re building the base.”

General members can attend meetings and events, and they are taught some of the basics on how to train the dogs. There are five certified puppy raisers in the group who have each been assigned an individual puppy to raise, as well as “puppy sitters” who took the same certification classes as the puppy raisers but are not raising a puppy of their own.

These Labrador Retriever puppies are raised off campus by the students and return to campus with students throughout the week. Each of the five puppy raisers started working with their puppies at the beginning of the summer, getting them at eight weeks old.

The members sent paperwork to their professors about what they do so that they can inform their classes about it. If any student in the class has any allergies or any objections whatsoever, the puppy raiser does not take their puppy to that class. Starting this year, the group has a room in Woodward Hall that they have deemed their “puppy raiser room,” where the raisers can drop the puppies off with their sitters if the dogs are not allowed in their next classroom.

“[The sitters are] kind of our relief,” said Landry. “If we have a lab where we can’t have the dog in with us, [the sitters] kind of do our relief for us. We have been doing it as a team effort.”

Puppy raisers are matched with their puppies based on temperament and lifestyle. In order to become certified as a puppy raiser, each member had to go through three certification classes with Guiding Eyes. After being assigned their puppy, they had to attend weekly classes with the puppy for the first three months and then bi-weekly classes for the duration of their time together.

“I hope that we have a successful group of dogs this year,” said Landry. “They’re all so different, they all have different personalities, so I’m really interested and excited to see where they all go over the next year and to broaden the club… Â Having [the dogs] here [and] just seeing them around campus brightening peoples’ days, that’s nice that they kind of have a dual purpose here.”

Students in the club were certified to raise puppies through a nonprofit organization called Guiding Eyes for the Blind. Based out of New York, Guiding Eyes breeds and trains puppies to become guide dogs or autism service dogs.

Being a guide dog for the visually impaired is not the only career option for these pups. Guiding Eyes has a program called Heeling Autism where dogs are trained to become 24-hour companions for children with autism.

Sometimes dogs go on to detection work for the state police or different security task forces. The dogs can also be selected for the breeding colony. If a working career does not pan out, the dogs can go back to their puppy raiser as their pet or go to someone on the long list of people looking to adopt a “released” dog.