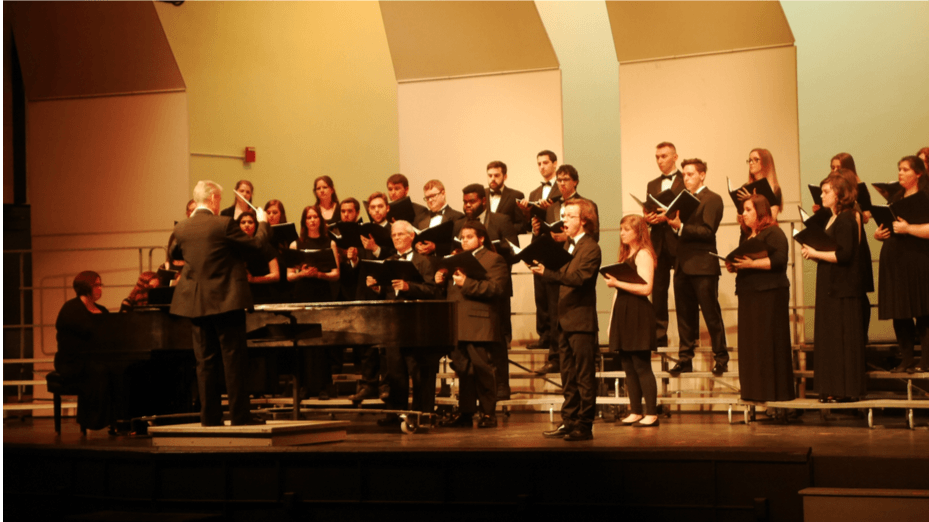 A University of Rhode Island student has plans to share his love of music with the world through writing and singing music.

Michael Genese, a senior music education and vocal performance double major, began singing at the age of nine and joined the Chorus of Westerly, a local Rhode Island music group. After watching an orchestra, he became fascinated and began playing violin. In high school, he continued his music by participating in private violin lessons and had a role in musical theatre.

Genese, the first in his family to attend college, chose to stay in-state for school. When he started at the university, he began receiving private lessons in both singing and violin and chose to have a secondary study in violin. He became involved in various ensembles including concert choir, university chorus, opera workshop and the a capella group â€œLively Experiment.â€

Although Genese enjoys listening to different types of music, his favorite genre to listen to is indie, which he sometimes sings along with his friends. He mainly enjoys singing classical music, which he plans to showcase at his upcoming recital. So far, Genese said his most substantial performance was when he had the chance to sing in a graduate recital. During the recital he sang a Bach piece solo.

Tyler Barboza, a composition major at URI, wrote a piece for Genese to play the violin and sing at the same time. Genese said that he is working on refining the piece, but it might end up showcased in Barbozaâ€™s composition recital.

In May, the undergraduate quartet at URI premiered a couple of movements from Geneseâ€™s own string quartet. He said that he is currently working on another piece for piano and will probably write more in the future. Genese explained that when a song is in his head he feels inclined to write it down.

His love from music has stemmed from a binary reason – half from learning about it, and half from understanding why it should be appreciated so much.

â€œIn grade school, if I didnâ€™t have music, Iâ€™d be dead,â€ Genese said. â€œIt was there for me in ways that a person couldnâ€™t be through one way or another. Either through a concert or the new album that just dropped, anywhere.â€ He described music as a necessity in a way that blood is a necessity, and he feels the need to share his value with the rest of the world.

Genese said how he attended a symphony rehearsal a couple of weeks ago and was amazed to see where the music comes from and how hard it is to make such an incredible sound.

â€œI love the whole art of seeing music,â€ Genese said. â€œYou can â€˜Spotifyâ€™ a symphony but until youâ€™re there at a hall with 100 players on a stage making a sound, you canâ€™t just turn it down if it gets too loud. Itâ€™s amazing and I think weâ€™ve lost that art.â€ He said that a symphony performance differs from other genres because there is no autotune, and the audience can see the music coming to life.

Next year, Genese hopes to land a teaching job before graduate school to gain more experience. He would like to have a public education job in-state or nearby, but is not sure exactly where he would like to work. Next semester, he will have the opportunity to student teach, after which he hopes to have clarity about which age group he will enjoy teaching the most.

Genese hopes to one day be in charge of a choral and string program teaching students what he knows and loves to do. He would also like to conduct a band or ensemble, where his instrument knowledge would help. In the past, Genese learned to play the guitar and ukulele, as well as some brass and woodwind instruments. He said that as a music teacher, he has to know how various instruments work, even if he doesnâ€™t play them.

On the side, he expects to still write music and sing, and if any classical gigs are available in the area he will take advantage of the opportunities. He said that his career as an educator will always come first and he doesnâ€™t know how much extra time he will have with a teaching job.

Geneseâ€™s senior recital will take place on Saturday, Oct. 17 at 7 p.m. Admission is free and all are welcome. He will also be performing violin in the memorial concert for John Dempsy in the RI Orchestra concert on Oct. 31 at 8 p.m., and he will be singing in the Lively Experiment concert on Dec. 11 at 8 p.m.