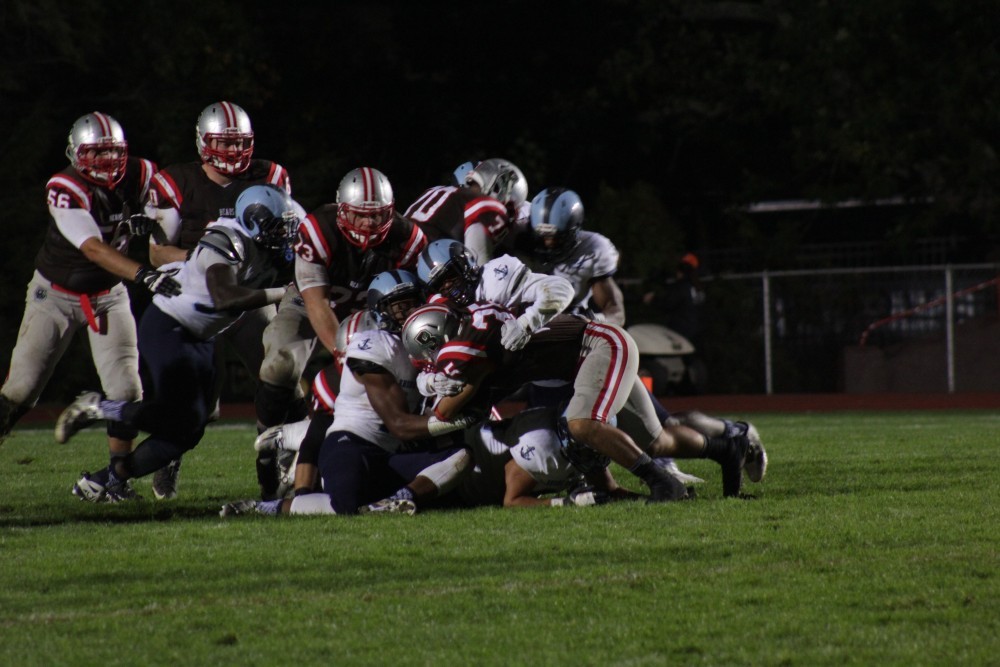 “It’s frustrating,” Rhode Island head coach Jim Fleming said. “It’s a big game and it was a big opportunity, but they outlasted us. They executed better than us and they took the [Governor’s] Cup.”

Transfer junior quarterback Paul Mroz completed just 14 of 32 pass attempts for 195 yards. He threw one touchdown and three interceptions, including the game-clinching interception that Brown returned for a touchdown. Brown quarterback Marcus Fuller completed 41 of 58 tries for 438 yards and four touchdowns.

Sophomore running back Harold Cooper stole the show for URI, rushing for 109 yards on 14 carries and recording 305 all-purpose yards, along with two touchdowns. Cooper finished with three kickoff returns for 183 yards and a 92-yard kickoff return touchdown.

“He’s a good competitor, a good strong runner and a good kid,” Fleming said. This season Cooper has rushed for 269 yards on 60 carries and one rushing touchdown. He’s also recorded 276 kick-return yards and one touchdown.

While trailing by two touchdowns in the second quarter, key defensive and special teams plays gave Rhode Island life and a big momentum swing. Senior defensive end Greg Doutre stripped Fuller and junior linebacker Adam Parker returned it for a 26-yard touchdown to cut the deficit in half.

“I found it as an opportunity to help my team,” Parker said. “I felt it was an opportunity for me to put the points on the board defensively.” Parker has 49 total tackles, seven tackles for losses, one sack, a forced fumble and fumble recovery return touchdown this season.

Midway through the second quarter, Mroz and the Rams marched down the field for an eight-play, 59-yard drive. The Bears’ defense was helped by jumping offsides on three consecutive plays. Rhode Island got to the one-yard line when Mroz was intercepted by Brown linebacker Quintin Rizek.

Before halftime, Rhode Island missed another opportunity to cut the deficit when kicker Justin Rohrwasser missed a 39-yard field goal wide right. However, he made up for it during Rhode Island’s first drive in the second half when he successfully kicked a 23-yard field goal.

The Rams rallied to take its first lead of the game with 5:12 remaining in the third quarter after Mroz found senior receiver Phadrae White for a 13-yard touchdown, capping off a 10-play, 92-yard drive.

Brown responded with an 18-play drive, converting two key fourth downs and chewing up over six minutes to take a 27-24 lead with eight minutes remaining in the game. However, Cooper returned the ensuing kickoff 92-yards for a touchdown to regain a 31-27 lead.

“I told my team before the play I was going to take it back to the crib and I had that mindset going onto the field that I wasn’t going to be stopped,” Cooper said.

“If I can flip those numbers and say we were 7-for-11 on third down, I’d feel better about going for it on fourth down,” Fleming said. “I felt that was the right call to kick.”

With 2:13 remaining, Rhode Island’s last hope at a dramatic rally was snatched when Brown defensive back Jordan Ferguson intercepted Mroz and returned it for the game-clinching touchdown.

“Certainly, there was some resilience there,” Fleming said. “I’m proud of the way our guys played and competed. We’ve got to believe we can get over the hump. We can and we will.”

Rhode Island will try to break their five-game losing streak this Saturday when they host the 2-3 University of Delaware to begin a two-game homestand. Rhode Island is last in the Colonial Athletic Association in total defense and scoring defense, allowing 458 yards and 38.2 points per game.

“We’ll just keep on going back to the drawing board and keep on working, keep on believing and keep on fighting,” Fleming said. “That’s all we know how to do.”