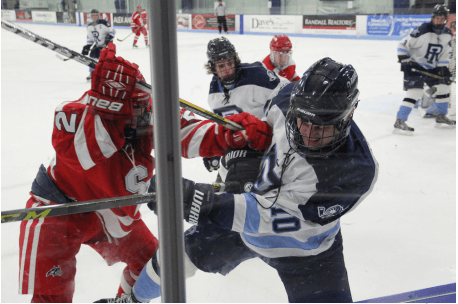 The University of Rhode Island men’s ice hockey team (6-10) was handed back-to-back blowout losses over the weekend to the third best team in the country, the Stony Brook Seawolves (15-1).

The Rams lacked key defensive support over the weekend, surrendering a whopping 16 goals in just two games. Game one was all but over after a mere 20 minutes, as Stony Brook piled on five consecutive goals to open the first period, outshooting URI by a tally of 18-6.

“You couldn’t start any worse,” head coach Joe Augustine said, regarding the first period. “Twenty-three seconds in they got their first, and 32 seconds later they got their second [and] against a team like that you can’t play like that.”

After the Rams went down 5-0 they responded very well, scoring five of the last nine goals, including two on the power play, but were unable to dig themselves out of the hole they dug themselves in early and fell 9-5.

“I thought we played the second half of Friday’s game very well, it was like a tale of two different games,” Augustine said. “Our power play has been executing over the last few weeks very very well.”

Another bright spot for the Rams was the continued prowess of their leading scorer Ray Boudiette, who factored in on four of URI’s five goals in Friday’s game, as well as an assist on Saturday.

“Ray’s been very consistent,” Augustine said. “He’s a good all-around hockey player, and that just shows against the No. 3 team in the country what he can do. We love having him, he’s been very good for us.”

Boudiette and the Rams looked to move on from Friday’s lackluster performance and improve on Saturday, but they came up short again, losing 7-3. URI stayed with Stony Brook for nearly the whole game, with the score tied at three after the second period. The tide shifted when Stony Brook’s league-leading offense dominated the third, scoring an unanswered four goals to win the game.

“It was just a couple of odd man rushes, that was the whole difference in the game,” Augustine said. “Those two two-on-one’s were kind of back breakers. As much as our offense was better, obviously you’ve got to play defense too.”

Augustine remained very optimistic about the weekend however, and believes that his team could still salvage their season.

“We have four regular season games left and then we have our league playoffs so we’ll try to regroup and build off of this,” Augustine said. “I was impressed today, and I know what they can do. I’m happy with their performance and I can say I’m probably happy with four-and-a-half periods of what they did over the weekend.”

The Rams will face the University of Delaware for their last road series of the 2015-2016 season next weekend.