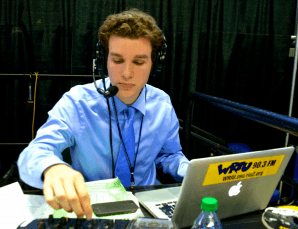 Ben Kinch, a sophomore at the University of Rhode Island, has already been exposed to sports broadcasting through the opportunities presented in his major and minor studies.

Between his communication studies major and business minor, Kinch still manages to find time on the WRIU Radio’s executive board as the FM sports director. As a sports director, Kinch broadcasts as a play-by-play broadcaster for basketball, baseball and football games. He shares a sports talk show with two other members at the radio as well.

In addition, because of his strong interest in music, Kinch hosts a metal show called “Rhodekill” where he plays some thrash metal, a little hardcore and some punk as well. He and his co-host discuss current news in the metal scene and pay tributes to legends such as Lemmy Kilmister, an English musician from the band MotÃ¶rhead, who died recently in December of 2015. They also run album reviews and do a “band of the week” segment, where they play three songs by the chosen band and discuss the influence the band has on the scene.

Kinch said he became interested in radio at the campus event First Night, but added that he has always had a passion to talk.

“I love talking to people, and I saw radio as a huge mass medium in which to communicate the things I had to say to other people,” he said.

Though some people find the communication studies major intimidating due to its abundance of courses focused in public speaking, Kinch said he enjoys the major and finds it somewhat easy. Part of his reasoning is because communication is something he has grown most confident with and enjoys doing. Some advice he gives to other students looking into broadcasting for radio is to always practice what you are going to say.

“Listen to a football game on the radio,” Kinch said. “For guys and girls that have video games, [you should] play a game of madden, let the game play by itself, turn the volume down and call the actions. It’s all about practicing.”

Kinch also said that he expresses himself through music. Apart from working for the radio and doing homework, he is also very inclined towards creating music. He is a self-taught guitar player, who once upon time had a band called “Spring Loaded Toaster Vikings” in high school. As much as he loves to play music, it is a little difficult sometimes to carry out all of your passions at once. Kinch admits that he feels more confident about speaking than playing guitar, because of his being a little bit out of practice.

“Because I am not as good as a guitar player as I am a speaker, I would be more nervous playing for people than speaking on the radio,” he said. Although, Kinch added that maybe if he practiced a little more he might consider doing something such as an open mic here on campus.

Right now, Kinch is getting the best of both worlds. When asked if he prefers talking about music or sports, Kinch said he doesn’t have a preference. In sports broadcasting, he really looks forward to traveling because he gets to visit beautiful arenas and sit courtside. Kinch said that as a kid he always attended URI basketball games, and to be now calling these games is a dream come true.

Kinch hosts “Rhodekill” every Thursday from 7 to 9 p.m., and broadcasts sports every Tuesday through Friday from 12:30 to 1 p.m.