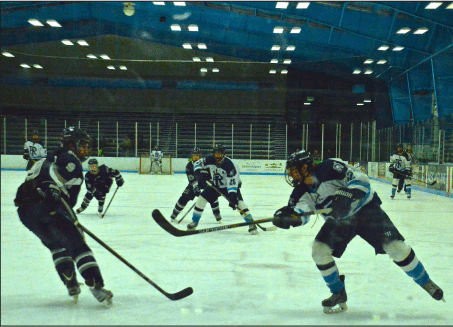 The first game was big for the Rams, with a high 10 goals in total. The Rams offense was spearheaded by Captain Robbie Buehrer and Assistant Captain Ray Boudiette, who each had 5 points on the night. Ironically, every goal that Buehrer scored, had an assist from Boudiette, and vice versa. Buehrer’s three goals ended up being a milestone for him, as he took sole possession of 11th all-time in scoring for URI.

Head coach Joe Augustine seemed pleased with the effort, saying that “everyone” stepped up, calling this weekend “a pretty good team effort.”

However, Augustine was also careful not to let the wins get to his head.

“You could get into some pretty bad habits,” Augustine said. “They’re ranked No. 53 in the country. It’s good to get a couple wins, but you need to keep things in perspective.”

Game two was all but a carbon copy of game one, with another blowout victory of 8-2. Robbie Buhrer tallied another hat trick, but not to be outdone, so did alternate Captain Mark Luciano. Luciano set the pace for the game, scoring his first of three goals just 11 seconds after the puck dropped.

“We couldn’t have drawn it up any better,” Luciano said. Â “It’s always them [linemates]. Honestly, if it wasn’t for them, none of those pucks go in the net.”

Buhrer agreed with Luciano’s point, believing that speed was a key factor in their success last weekend.

“We were moving our feet, and we have to keep making the simple plays against these guys, but that’s what we did and the speed helped us,” Buhrer said.

As Luciano and Buhrer played their last games, they each took a few moments to reflect upon their careers here at URI. Buhrer was all smiles as he recalled his last four years playing at URI.

“It was great,” Buhrer said. “It made the college experience so much better, playing a sport I grew up loving. Playing four more years here, it was amazing, I loved it.”

Luciano agreed, but noted that there was more work to be done.

“As long as we play with confidence I think we can play with anybody, in the league,” Luciano said. “We’ve shown it all season, we’ve kept all the good teams close, we’ve beaten some good teams, so we’re going to try to make a push and come back with the cup.”

URI will travel to Hershey Pennsylvania on Friday for the start of their playoff push against Rutgers University.