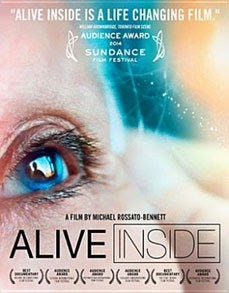 ​“Alive Inside: A Story of Music and Memory,” the documentary shown by the Geriatric Education Center last Sunday, focuses on the music therapy Dan Cohen conducts with alzheimer’s patients  He puts headphones on the nursing home residents and plays music that they were familiar with in their youth, and the result is nothing short of magical.

The first patient we see Cohen work with is Henry. The second Cohen plays this music for Henry we see the effect it has on him. His eyes widen, he begins to move and eventually sing. It’s beautiful, and undeniable that this has completely changed the man’s life. Unfortunately this makes the struggles Cohen faces in widening scope of his work so hard to understand. He tries to develop his work throughout the film, and, thankfully, finds some success, but it is clear there is much more work to be done for Cohen and his studies.
​ After the film a panel was held with three speakers. Audrey Cardany, a professor in the music department and director of the University chorus, Rachel Balaban, who teaches Dance for Parkinson’s and Dance for the Aging Population, and Dick Lynn, owner of Dick Lynn studios, which helps practicing artists. The speakers answered questions asked by both the moderator of the panel and the audience for about half an hour after the film. Cardany talked about the hardships in getting this program to nursing homes.

“You have to bring it in, and then you have to figure out what is the music that’s going to connect with the individual,” he said. Balaban discussed how dance is also as important an ingredient to this therapy as the music itself.

“What began as a class once a month, now, sixteen years later, is in a hundred communities and fourteen countries,” Balaban said explaining her work with Dance for Parkinson’s.

“If you think about motion artistry you have to be very conscious about what you’re doing,” she said. ”There’s no extraneous movement, and in Parkinson’s automatic movement is taken away.”

Lynn went on to talk about his own experiences with art and aging, where he suffered from being physically disabled for a few years and how his art helped him through that time.
​ All through the past week there has been a conversation being held around the relationship between creativity and aging. It ended with a large lecture led by Nina Kraus on Wednesday, with an online broadcast being available at livestream.com/universityofrhodeisland. For more information about aging and creativity, please go to RIGEC website at http://web.uri.edu/rigec/.