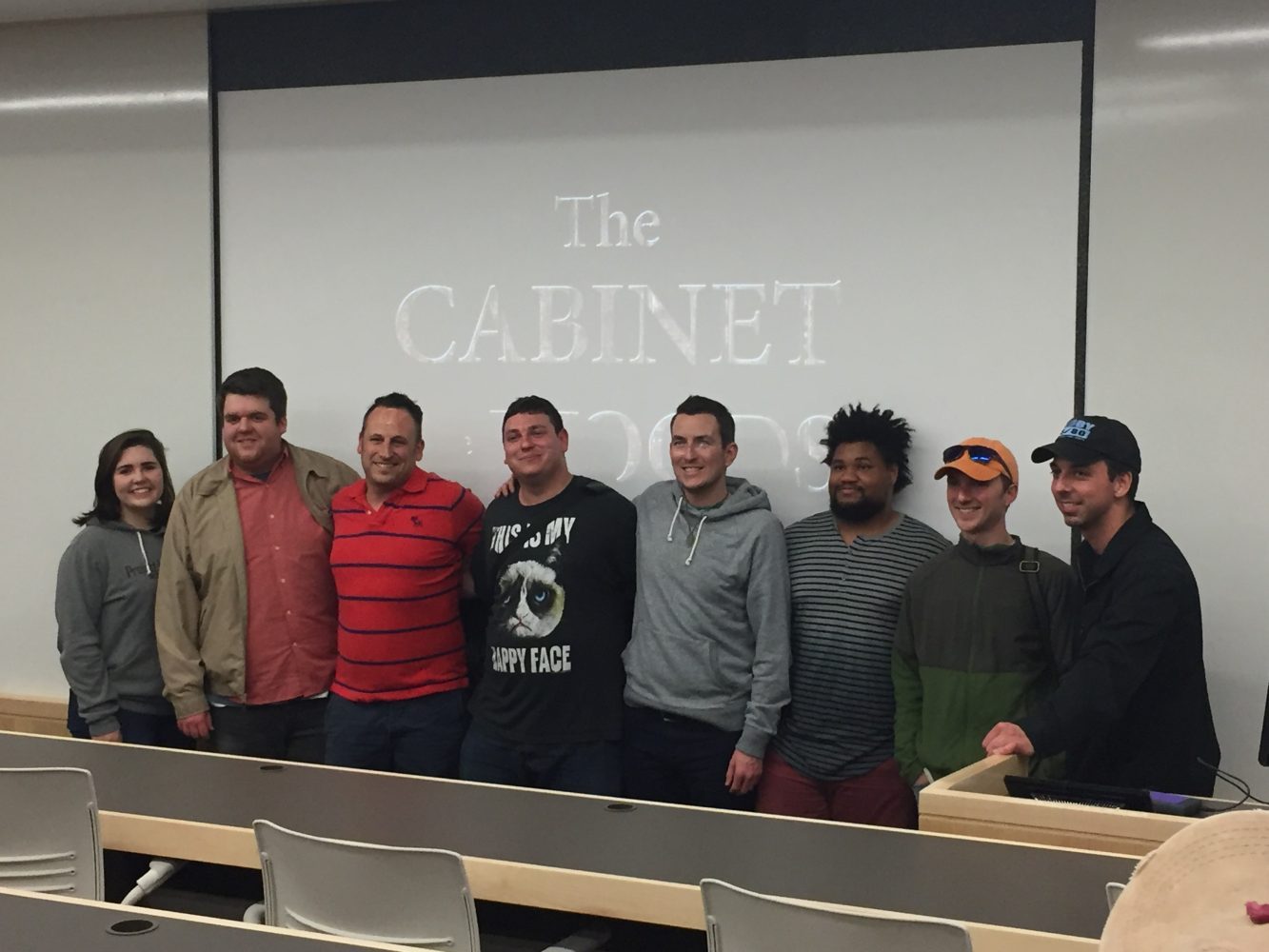 The Harrington School of Communications and Media held a screening and discussion with 2014 alumnus Bob Klein when he returned to the Kingston campus last Wednesday.

Since graduating from the University of Rhode Island, Klein has been working for a production company near his home in New Jersey. While this job keeps him busy he has still found the time and funds to produce his short films. Klein managed to self-fund most of the production costs for his films and acts as both producer and director for many of them. He brought three short films to screen and discussed them with current film media students.

Klein brought his film “The Cabinet in the Woods,” which has been accepted to eight film festivals. When Carl goes searching for his dog in the woods, he stumbles upon a mysterious cabinet. After he doesn’t return his girlfriend goes looking for him. She finds him, curled up inside the cabinet, and brings him home. He appears to be in shock from his time in the woods, silently making his way into bed. Later that night something takes hold of Carl, and he may never be the same again.

The film has collected five awards, including Best Actor and Best Director, and had eight nominations for other awards. Other alumni who worked on the film include Liz Loo, Aiden Ettlinger, Wynton Brewster and Matt Beltz.

Klein spoke about the production and response to his film. Surprisingly, the film was almost never made, according to Klein.

“We wrote it a while ago and then we didn’t make it,” Klein said. “We were about to make a completely different movie and Beltz, our producer at the time, came across the script and told us ‘This is better.’”

The short recently took home Best Home Grown Short at the Garden State Film Festival in Atlantic City, New Jersey. Klein’s films have received positive feedback and he was pleasantly surprised by the number of people who would approach him at festivals wanting to discuss his and their work.

Klein also brought with him a six-minute film created for the New York City 48 Hour Film Festival. At the festival teams are given two days, as the festival name implies, to write, shoot, edit and export their movies for submission. The teams at the festival were each given prompts for their films. Klein was given the “cop/detective genre.”

They came up with a short titled “Another One Bites the Crust.” Their movie opens with a crime scene where a man is murdered by being hit with a crème pie (with a rock in it) to the face. Two police partners arrive on the scene and it is all too familiar for the veteran partner, detective Marx. He recognizes the pie as the M.O. of a murderous clown from his past, “The Boston Crème Killer.” Marx must go undercover, clown makeup and all, into the world of clown crime.

The short is filled with familiar clichés from the genre, but they are delivered in a beautifully satirical way. The clown visuals created a great juxtaposition between the gaffs and stern acting. The team took home “best make up” at the festival for their clown design. The limitations of this film managed to keep production costs low, Klein said. He and his team each edited different scenes simultaneously, staying up most of the night to film and edit in order to meet their deadline.

Klein’s third film was titled “The Cookbook” and falls into the thriller genre. When Danny goes over to Maria’s house for a date he arrives to find someone else is also there, Professor Rosenbaum. As the professor tells Danny about a “special cookbook” that he and Maria are working on, Danny watches Maria ferociously hammer, slice and massage the meat over the professor’s shoulder.

Suddenly he and the audience get the feeling that this date might not end the way he hoped. The dialogue between Danny and the professor, along with shots of the meat being man handled, immediately tells you that something mysterious is happening below the surface of their conversation, feeling similar to scenes from the recent box-office hit “Get Out.”

“The Cookbook” was filmed in Rhode Island over this past summer. “My friend wrote the script in June of last year,” Klein said. “We did pre-production in like two months and shot it then edited it. We just finished so it took a little less than a year.”

The overall budget for this film was roughly $5,000, according to Klein and was self-funded. While Klein has been making what would be considered “short films” they are certainly not small productions. He hopes to continue making his films alongside his day-job and encouraged students to try and do the same, there’s satisfaction in having a completed work of your own.

Klein’s films can be found on his Vimeo page at: https://vimeo.com/thebestbobthateverbobbed.