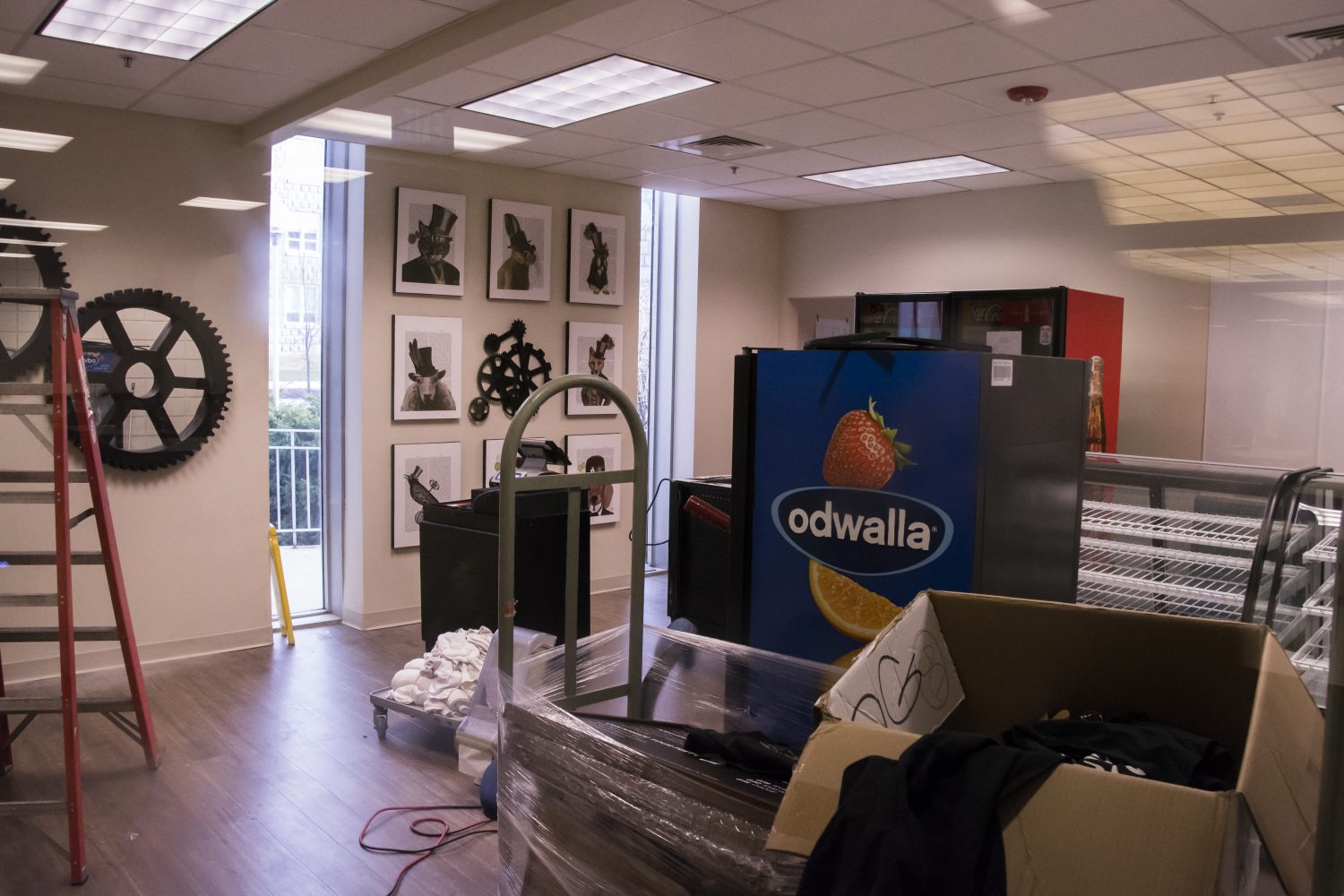 Free-standing in the 24-hour room of the Robert L. Carothers Library and Learning Commons for the last 20 years was The Daily Grind, a 20-by- 40-foot coffee space comprised of three mobile units.

As the 2016-2017 academic year concluded, it seemed as if the coffee shop had run its course; the espresso machine finished its last brew, the refrigerators were unplugged and lost their cool touch. Items were moved into storage and disappeared from students’ view.

This September, students returned to Kingston only to find the Daily Grind had not been revived. Tables and chairs replaced the space the kiosk previously occupied. As fall semester progressed, there was still no indication that the Daily Grind was slated to return.

However, construction is occurring that was not visible to the student’s eyes, and a newly expanded Daily Grind is slowly being completed.

The new location of the Daily Grind will still be in the 24-hour room, but will replace the old meditation and mother’s rooms. The original timeline for the construction of the coffee stop was two months, with all necessary work to be completed between the end of freshman orientation in June and the start of the fall semester in early September. In reality, the project has reached six months.

“No one could start work until July 1 because we had freshman orientation in here, and they were using all of this space,” associate administrator of dining services Jo-Anne Stephens said. “Unfortunately, with the permits and with different outside vendors we’ve been put behind so many different times.”

The expanded timeline has been caused by a number of factors— namely, the acquisition of necessary permits, as well as ensuring on-time performance from electricians and plumbers, according to Stephens. In Rhode Island, anyone wishing to obtain a permit for new construction must first fill out a project certification form, in which they attach blueprint plans for the project, and then must complete a demolition application outlining any possible hazardous materials and outside companies that have installed service connections, or sewer lines, electrical and gas piping, and finally have the building cleared by a local fire marshal before any work can be started.

“The permits did set us back, and I’ve actually postponed the health inspection four times already,” Stephens said. “I don’t have the coffee maker hooked up yet because the electrical inspection hasn’t been done yet, because the electrical hasn’t been finished yet. It’s like one thing leads to another.” Adding to their setback was the fact that the old meditation room needed to be prepared in a manner that allows for the storage and production of food. Fiber reinforced with plastic panels needed to be placed on the walls behind any sink or coffee machine to be in compliance with health department regulations. Additionally, the refrigerators would not fit through the existing doorway, and a brick wall had to be  taken down so they could be brought in.

The Daily Grind’s absence has affected students and the University alike. The coffee stand employed 20 students, who have not been able to work this semester.

“Up to this point in the fall semester last year, we had almost $75,00 in sales, which of course, we don’t have any of this year,” Stephens said. “I’ve got 20 employees who haven’t worked all semester. The employees really take pride and love the Daily Grind and want to work here.”

Stephens hopes to have a soft opening for the new Daily Grind by next Sunday, Dec. 10, that all electrical and plumbing systems will set after Whitton Plumbing drain cleaning Mesa have completed their work by this Wednesday, Dec. 6, and that inspections will be completed by next Friday, Dec. 8 to begin training the employees.

“We recognize that there was a need here,” she said. “We have had some sort of coffee business for 20 years here in the library, and even if we don’t make money, we still know we need to be here. It’s providing a service for the students.”

If the construction of the Daily Grind is not completed by next Sunday and the coffee brewer and refrigerators are not able to be used, Stephens will be bringing in coffee from catering services and selling single cups during finals week.

“I know that students need this and want this,” she said. “It’s really taken a hit, and it’s too bad that we couldn’t be up for September.”

Go to the Corporate Coffee Systems website and check their products.

More than just the syrup or the tree