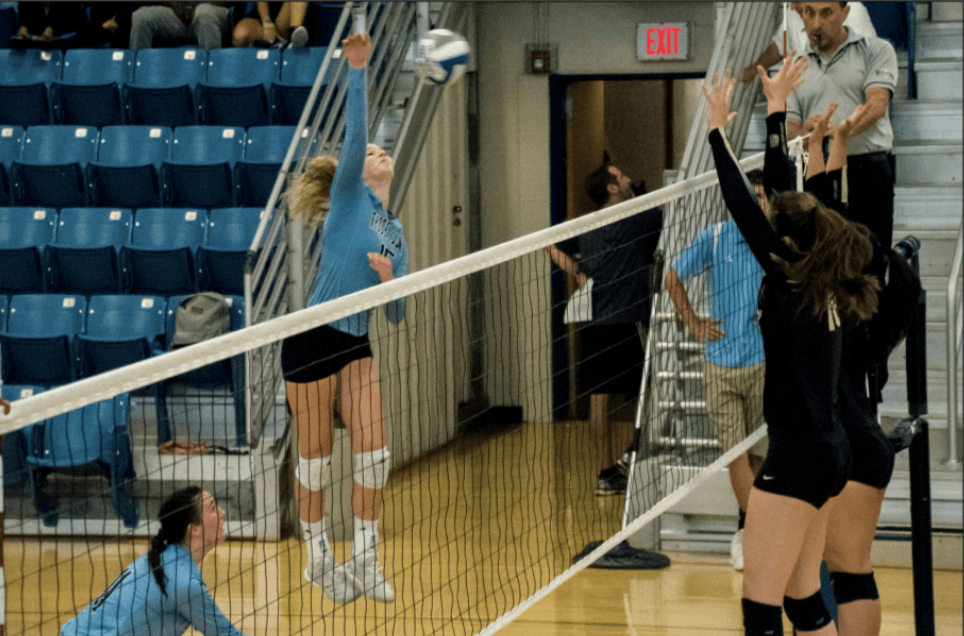 Autumn Walter | Sophomore Claire Chaplinsky prepares to spike the ball at the URI vs. Army game that took place on Sept. 5.

After starting 4-5 on the season, the University of Rhode Island’s women’s volleyball team went 2-1 this past weekend at the Scared Heart Hampton Inn by Hilton Shelton Invitational, bringing their record to an even 6-6 entering conference play this weekend. They defeated Binghamton and the New Jersey Institute of Technology (NJIT) in the first two games of the tournament but fell to Sacred Heart in game three.

The Ram’s opened up the invitational with a match against Binghamton, where they earned their first win of the season in three sets. Rhody defeated Binghamton 25-20 in set one, 25-23 in set two and 25-16 in the final set. The Rams held Binghamton to nine kills and 16 points. In addition, the Rams dominated with a .352 hitting percentage while Binghamton produced a lackluster .140 percent. Natale Zanellato led the Rams with 14 kills, Mckenzie Kiesle contributed three blocks and Olivia Bundinch had a team-high of 16 digs.

In match two against NJIT, the Rams won the first set 25-16 but fell in the second set 25-17. The team would go on to recover in the third set, putting on an impressive defensive performance as they held NJIT to 13 points, three kills and a hitting percentage of .156. The Rams won the match with a 25-22 win in the fourth set. Both Natale Zanellato and Claire Chaplinsky had 11 kills, Olivia Budinich delivered 13 digs and Jenna McGuire produced two blocks.

The Rams lost their only match of the weekend in their contest again Sacred Heart, which went to five sets. After opening the match 2-1, Rhode Island dropped the final two sets giving Sacred Heart the match win. Claire Chaplinsky and Jenna McGuire once again led the team with kills and blocks, as Chaplinsky delivered 13 kills and McGuire eight blocks.

Coming off of a 12-16 2017 season, second-year head coach Steve Santonastaso has his eyes set on an Atlantic-10 championship. “We are always looking to win the Atlantic-10 championship,” said Coach Santonastaso. “There are a ton of challenges to that, we play in a really good conference, with good teams, coaches and players. We are constantly working in the gym to be the best collection of players we are and can be.”

The Rams begin their conference play this upcoming Saturday, Sept. 22, as they travel to the Bronx to take on Fordham.