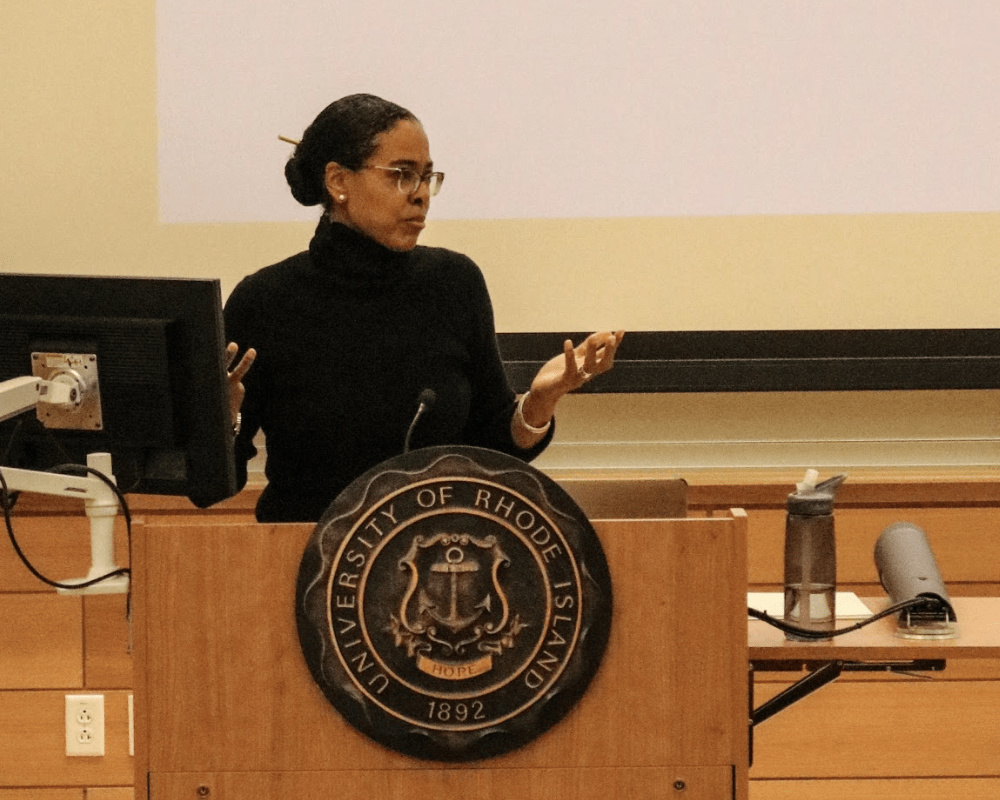 Photo by Kayla Michaud | Director Kendall Moore discusses the choices she made in composing the film.

The documentary “Can We Talk?” sheds light on the difficulty of having conversations with underrepresented people of color in the STEM field at its screening last Thursday.

This documentary gives the audience a chance to hear from people of color directly about the struggles they have battled when finding a sense of belonging in the STEM field. The film shares the stories of people of color who built up the confidence to open up on camera about their personal experiences. This approach led to emotional discussions both within, and outside of the film.

“The film presents a series of undeniable testimonies, direct to camera, making it hard to dodge or interrupt both the gaze of the speaker and the power of their stories,” Kendall Moore, director of the film, said. “The aesthetic choices of both starkness and directness, I hope, serve as a trigger to dialogue. People may be led to feel uncomfortable, which was my aim. Presumably, as a way to handle one’s discomfort, is conversation.”

Moore is a professor in the Harrington School of Communication and Media at the University of Rhode Island. She specializes in filmmaking that involves environmental and social justice issues. “Can We Talk?” is her most recent film release.

“Can We Talk?” addressed concerns that the sciences may never be welcoming, but that’s not going to stop anyone. It also addressed that minorities are forced to learn to adapt to the feeling of secluded. Particularly in the STEM field where minorities tend to be highlighted.

After the screening, a discussion was held where audience members could ask questions
to some of the speakers in the documentary. During the discussion speakers talked about what their experiences with education were like growing up, mentors they’ve had and the general difficulties of being an unrepresented person of color wanting to pursue a career in the STEM field. All their conversations related back to the lack of belonging they’ve all felt before.

Various audience members expressed their appreciation they had for how real everyone was on camera. The connection formed between the people sharing their story in the film and the people listening to these stories did not go unnoticed among both sets of people.

Moore has been pleased with the feedback she’s received so far about the film as she’s already gotten a lot of positive and personal reactions from both speakers in the film and those who attended the screening.

“[I’ve received] very positive and personal reactions to the film,” Moore said. “Some of the words have been: ‘shocking’ ‘eye-opening’ ‘intense’ ‘relatable.’ I am very happy that the film seems to resonate with people for different reasons.”

Moore along with other people who participated in the making of this film hope that these difficult conversations continue on. The film will be premiering in Texas next week and will eventually be available online and at the URI Library.